Hypersomnia or excessive tiredness is one of those problems that's often neglected or undervalued by many. This is bad because its influence on performance can prove to be very negative. Today's article is about its causes and the successful measures one can take against it. 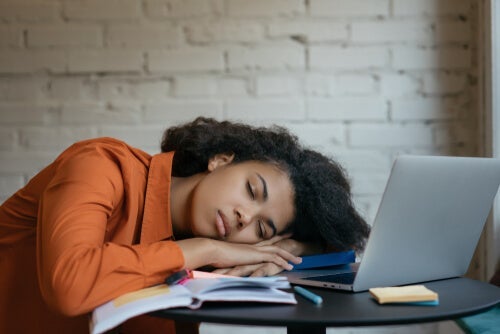 Hypersomnia or excessive tiredness affects approximately 4-6% of the population, according to some estimates. It’s a common problem that’s often unidentified, especially by those afflicted by it. People usually mistake it for tiredness and fatigue but it can be due to many reasons. Therefore, a professional assessment is the best way to get an accurate diagnosis.

The consequences are significant, despite the fact that many people have normalized the presence of this excessive drowsiness in their lives. In fact, it often leads to a decrease in the ability to concentrate and remember things.

In addition, it causes mood swings and greatly interferes with daily activities. Continue reading to find out more about this neurological condition and its possible causes.

Hypersomnia is also known by the name of excessive daytime sleepiness. This is a physiological state that seemingly inexplicably makes people sleepy during the day. Thus, the person experiences a subjective narcotic sensation during the day and it hinders normal functioning. In order for a doctor to diagnose a person as having hypersomnia, the symptoms must be present daily for at least three months.

It isn’t always easy to identify what’s happening. Some may think they’re extremely tired and have no idea of why. But to facilitate the detection of hypersomnia, you must consider to what degree you feel drowsy in situations such as:

If you’re very tired during most of those situations, then it’s very possible that you have this problem. However, the causes vary and can differ significantly from one person to another. Thus, it’ll be important to explore the origin in order to remedy and mitigate its consequences.

Not getting enough of or bad quality sleep

In order to function properly during the day, humans need to sleep properly at night. When a person is chronically sleepless, the sleep deprivation takes its toll. Thus, hypersomnia happens in people who only sleep five or fewer hours every night for a significant period of time.

This can occur due to insomnia or as a consequence of a lifestyle in which a person restricts their sleeping hours for work or social reasons. This will make it difficult for them to get up in the morning. In fact, they may experience sudden bouts of drowsiness during the day.

Similarly, if you interrupt or fragment your nighttime sleep, it will be anything but restorative. People with sleep maintenance insomnia, restless legs syndrome, or respiratory disorders most likely wake up at various times during the night. Thus, there’s a consequent decrease in the quality of their sleep and hypersomnia makes an appearance.

There are several disorders in which hypersomnia is one of the main symptoms. For example, narcolepsy usually begins with excessive daytime sleepiness. Then, other symptoms add up such as cataplexy, sleep paralysis, and hypnagogic hallucinations.

Similarly, disorders such as idiopathic hypersomnia or Kleine-Levin syndrome, occur with this symptom. In them, there’s a considerable increase in total sleeping hours, as well as more or less irresistible accesses to daytime sleep.

Among the multiple causes of excessive daytime sleepiness, there’s encephalopathies, trauma, and dementia. It can even be a symptom of depressive episodes or be due to the consumption of certain drugs.

In short, it’s a common symptom of various organic, neurological, and psychiatric conditions. Its presence makes it difficult for those who suffer from it to lead a functional and satisfactory life since it affects their cognitive functions and emotional state.

You must consult a doctor if you think that you, or someone close to you, may find yourself in this situation. In some cases, this symptom will alert you of the presence of other conditions that require intervention. And, in others, it’s simply an invitation to be more respectful of your sleeping needs.

Five Health Effects of Sleeping Too Much
Most people think not sleeping enough is the only problem. However, sleeping too much can have just as many health effects. Learn more here! Read more »
Link copied!
Interesting Articles
Clinical Psychology
Postvention: When Suicide Prevention Fails