Eugène Delacroix was one of the most important French Romanticism painters. His style is now known as Orientalism and his works stand out for their loose brushstrokes and figures full of vitality. 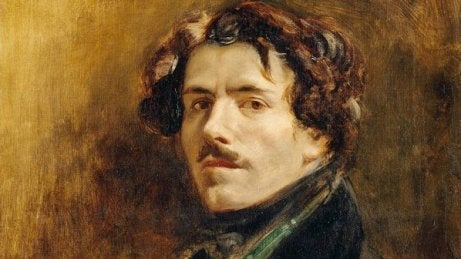 Eugène Delacroix was a leading painter of the French Romantic period of the 19th century. Inspired by history, literature, and exotic places, Delacroix painted famous works as Liberty Leading the People and The Death of Sardanapalus.

The unique style of his paintings made him an iconic figure in art history. In fact, experts consider Delacroix to be one of the most important Romantic artists.

His works marked a new artistic trend: Orientalism. After Delacroix, you could see a clear desire to represent the exotic cultures of the Middle East and Africa in French art.

Ferdinand-Eugène-Victor Delacroix was born on April 26, 1798, in Charenton-Saint-Maurice, France. Unlike other French painters, Delacroix was born into a well-off family. His father, Charles, was minister of foreign affairs. In addition, he served as a government prefect in Marseilles and Bordeaux.

His mother, Victoire Oeben, was the daughter of a renowned cabinetmaker, Jean-François Oeben, who worked for King Louis XV. She was a cultured woman who encouraged the young Delacroix to follow his inclination for literature and art.

The Delacroix family served in the Revolution and the Empire that followed. Delacroix had a loving but fragile childhood, as he was prone to illness.

There’s a theory that attributes the true paternity of Eugène to the statesman Charles-Maurice de Talleyrand-Périgord. This belief was strengthened by Delacroix’s strong physical resemblance to Talleyrand.

In fact, this would also explain the patronage Delacroix received throughout his life. Despite the nonconformist nature of his art, the painter received significant patronage from the French government.

Unfortunately, calamity seemed to be marked out for him. Delacroix’s father died when he was seven years old, and his mother passed away when he was 16. After the death of his parents, the young boy attended the Lycée Louis-le-Grand in Paris. However, Eugène Delacroix left school to begin his artistic studies.

Initially, he joined the studio of the painter Pierre-Narcisse Guérin. In 1816, he enrolled at the École des Beaux-Arts. During these years, the young man was inspired by his frequent visits to the Louvre, where he admired the paintings of old masters such as Titian and Rubens.

In 1822, at only 24 years of age, Delacroix exhibited Dante and Virgil for the first time. The artwork immediately caught the attention of critics.

Many of Delacroix’s early paintings were of religious subjects. However, it’s also curious that this early work was inspired by literature.

For his other works in the 1820s, Delacroix turned to recent historical events. His interest in the Greek War of Independence and his anguish over the atrocities of that war led to The Massacre at Chios, which he presented at the Salon of 1824. Two years later, he presented Greece on the Ruins of Missolonghi (1826).

Even at this early stage of his career, Delacroix was fortunate to find buyers for his work. In addition, he was hailed as a central figure in the Romantic era of French art, along with Théodore Géricault and Antoine-Jean Gros.

Delacroix continued to impress critics and his patrons with works such as The Death of Sardanapalus (1827). This work depicts a decadent scene of a defeated Assyrian king preparing to commit suicide.

One of his most famous paintings was Liberty Leading the People, inspired by the Revolution of 1830. This scene depicts the moment when the outraged people revolted over the new laws on freedom of the press and the severity of the Restoration regime.

This monumental canvas painting blends classical allegory with contemporary realism. The painting depicts a woman holding a French flag and leading a band of fighters from all walks of life. This painting was purchased by the French government in 1831. In fact, it became an iconic work of art in the Third Republic.

Eugène Delacroix and his trip to Morocco

In January 1832, Eugène Delacroix accompanied King Louis-Philippe’s envoy, Count de Mornay, to Morocco. The count was on his way to Morocco on a diplomatic mission. He was fascinated by the landscape, the beauty of the people, and their customs.

After this trip, Delacroix returned to Paris with new ideas for his artwork. Paintings such as Women of Algiers in their Apartment and Moroccan Chieftain Receiving Tribute defined his romantic interest in exotic subjects and distant lands.

The deep impression of this exotic land inspired more than 72 paintings during Eugène Delacroix’s lifetime. However, although his painting was mostly orientalist, he didn’t focus only on this exoticism.

Eugène Delacroix continued to paint scenes taken from the work of his favorite authors, including Lord Byron and Shakespeare. In addition, he was commissioned to paint several rooms in the Palais Bourbon and the Palace of Versailles.

He felt he had found the Orient of his dreams, as well as a preserved antiquity. Delacroix’s memories of Morocco stayed with him all his life. The notes he took, the watercolors he painted, and the objects he brought back from his travels and kept in his studio marked his painting for several years.

From the 1840s onwards, Delacroix spent more time in the countryside outside Paris. He befriended other leading figures in the cultural world. Two examples are the composer Frédéric Chopin and the author George Sand.

“The first merit of a painting is for it to be a feast for the eye.”

Delacroix’s last major commission was a set of murals for the Church of Saint-Sulpice in Paris. This collection includes Jacob Wrestling with the Angel, a scene of intense physical combat between two figures in a dark forest.

This commission occupied Delacroix throughout the 1850s and into the following decade until his death. Eugène Delacroix died on August 13, 1863, in his apartment on Rue de Fürstenberg in Paris.

The personal life of Eugène Delacroix

Unlike other artists, and contrary to the customs of the time, Eugene Delacroix didn’t marry. He did, however, find a companion in Jeanne-Marie Le Guillou.

Jeanne-Marie was born in Finistere in 1801 and entered the service of the painter Eugène Delacroix around 1835. Le Guillou remained at his side until the artist’s death, watching his last breath.

Le Guillou was Eugène Delacroix’s faithful governess, considered almost his bodyguard. She cared for her master and friend with total devotion, sparing the painter any material problems.

Over the years, she became his friend and confidant. In 1855, Eugene Delacroix said that she was “The only being whose heart is mine without reserve”. After the death of her master, her loyalty was rewarded with the inheritance of several paintings.