Adelaide Labille-Guiard was a French artist from the 18th centur, who managed to make a name for herself despite the patriarchal world she lived in. Discover all about her artwork, as well as her relationship with the French crown, here! 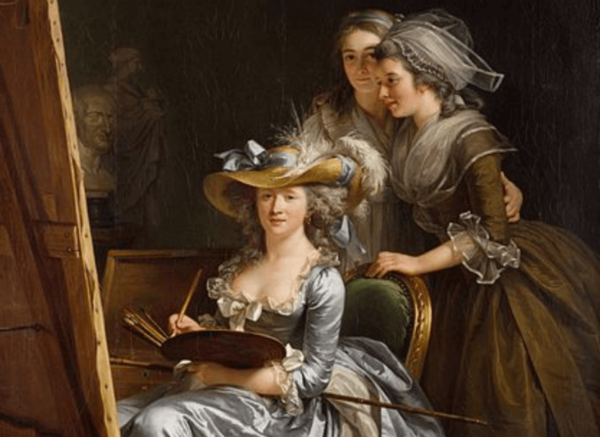 Adelaide Labille-Guiard des Vertus was a talented French miniaturist and painter. Despite the difficulties of the time, Labille-Guiard gained considerable recognition for her art, which was very unusual for a woman in those times.

In the 18th century, only a limited number of women admitted to the prestigious French Royal Academy of Painting and Sculpture. The few accepted candidates couldn’t take part in drawing classes, something considered essential in the education of their male colleagues.

Despite the significant limitations, Adelaide Labille-Guiard managed to chart and decide her own path. During her lifetime, she became not only a successful portrait artist but also a mentor to other women artists.

Adelaide Labille-Guiard: from a private person to a recognized artist

Adelaide Labille-Guiard was born in Paris, France, in 1749, and was the youngest of eight children. Her father was Claude-Edme Labille and her mother, Marie Anne Labille.

In 1769, when she was only 20 years old, she married Louis Nicolas Guiard, a financial clerk. However, the couple divorced in 1779 and didn’t have any children.

The marriage certificate sheds some light on the life of the artist. The marriage contract, signed on August 25, 1769, acknowledges that Labille-Guiard was a professional artist (painter) at the Saint-Luc Academy.

During this era, professional female artists came from families of artists or craftsmen. However, Labille-Guiard was the daughter of a merchant.

His father’s fashion store undoubtedly reinforced her interest in fabrics and textures. In spite of this, this store didn’t provide her with any opportunities with artistic institutions.

In order to train and develop an artistic career, she had to foster her own circle of influence. For this reason, she started learning to paint in the traditionally female medium of miniatures and pastels.

Over time, she changed her work from pastels to oil, and from miniatures to large-scale painting. This change was the result of her training in different artists’ studios.

After many years of studying her life, researchers discovered that Adelaide was admitted to the Académie de Saint-Luc in 1769. Also, according to records from the same academy, we can see that she presented some of her pastel paintings in order to be admitted.

One particular piece of work – a miniature – is referred to in the admission papers. However, there’s no trace of this particular work. It seems to have completely disappeared.

Although Labille-Guiard became an accomplished painter of miniatures, pastels, and oils, we know very little about her artistic education. After marrying Louis-Nicolas Guiard in 1769, she became an apprentice with the master pastel artist Quentin de la Tour.

The Academy of Saint-Luc was unusual in how many women it accepted: 130 women were studying there in 1777. Thanks to this opportunity, Labille-Guiard managed to practice art professionally.

Labille-Guiard studied miniature painting with the master François-Elie Vincent, a friend of the family. She had this opportunity because her works were on show at the Saint-Luc Academy. During this apprenticeship, she met her second husband, the son of Vincent, François-André Vincent.

Unlike the male artists of the time, Labille-Guiard didn’t limit herself to painting. The artist was also an experienced teacher of aspiring young artists.

She was a devoted teacher, serving as a point of reference, and also as an advocate, for her students. The most famous of her pupils was Gabrielle Capet, one of the most eminent miniature painters of her time.

Labille-Guiard received the support of some members of the Royal Family and nobles of the previous regime. In 1787, she became the official painter of the aunts of King Louis XVI, Adelaide and Victoire.

The Salon of the Académie de Saint-Luc became so successful that the Royal Academy was offended and decided to take action. The Royal Academy, with the support of the monarchy, issued a decree in March 1776 abolishing “guilds, brotherhoods, and craft communities”.

For this reason, the Académie de Saint-Luc closed its doors in 1777. Labille-Guiard continued displaying her works at the academy until it closed. After that, she exhibited her works in the Hall of Correspondence.

Her talent as a painter became obvious very early on. Soon, her teacher, François-André Vincent, helped her to meet painters at the Royal Academy. Among these artists were Joseph-Marie Vien, Bachelier, Amie Suvée, and Voiriot. With their help, she gained national recognition and was accepted as a member of the Royal Academy.

Acceptance into the Royal Academy of Painting and Sculpture

On May 31, 1783, Labille-Guiard was accepted as a member of the Royal Academy of Painting and Sculpture of France. Three other women, including Élisabeth-Louise Vigée-Lebrun, became members on the same day.

The patronage of the aunt of the King of France, Princess Marie Adélaïde, granted Labille-Guiard a government pension of 1000 pounds. In addition, she secured a contract to paint a portrait of Princess Adelaide, her sister Victoire-Louise, and Elizabeth, the King’s sister.

Adelaide’s self-portrait, exhibited in 1787, was Labille-Guiard’s largest and most ambitious work at that time. In 1788, she was commissioned by the king’s brother, the Count of Provence (later Louis XVIII of France), to have a portrait painted. This work ended up being the Reception of a Knight of Saint Lazarus by Monsieur, Grand Master of the Order.

Her friendships with royalty made Labille-Guiard politically suspect after the French Revolution of 1789. In 1793 and 1794, many of the nobles who supported her were condemned to the guillotine.

On August 11, 1793, an order of the Directorate of the Department of Paris forced Labille-Guiard to hand over portraits of the nobility for burning at a public stake. This included the unfinished commission of the Count of Provence.

Labille-Guiard hid from this reign of terror in a rural shelter shared with Vincent and Marie Gabrielle Capet, among others. She eventually returned to a radically altered Paris in 1795.

In 1795, the Louvre appointed her as an artist and she received a new pension of 2000 pounds. She was the first woman artist to set up a workshop for herself and her students at the Louvre. She continued to exhibit portraits at the Salon until 1800.

On June 8, 1799, she married her teacher, François-André Vincent. From then on, she signed some of her paintings as Madame Vincent. The pastel portraits of Marie Adélaïde, Victoire-Louise, and Élisabeth remained in Labille-Guiard’s possession until her death. She died on April 24, 1803, after a long illness.

Raphael Sanzio: Biography of a Renassaince Painter
Raphael Sanzio is indisputably one of the greatest artists of the High Renaissance. He was a renowned painter, well-respected by his peers. Read more »
Link copied!
Interesting Articles
Biographies
Jane Goodall and How She Became a Worldwide Expert and Activist