Escape from Alcatraz: Suspense and Freedom

Escape from Alcatraz is one of the most memorable prison films. A homage to freedom in its purest form. Asphyxiating and claustrophobic, it manages to trap us and envelop us in an atmosphere in which the suspense remains until the end. We'll take you behind the bars of Alcatraz in this article. 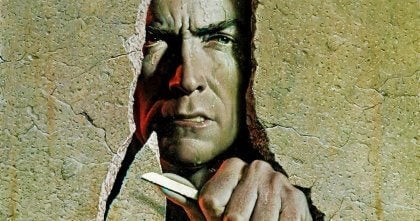 Escape from Alcatraz takes place in one of the most isolated and inhospitable scenarios of the world. One of the places where “the most dangerous criminals” served their sentences. The film is loosely based on a true story and Don Siegel directed it for the big screen in 1979. Most people will never watch another prison film without thinking about this one.

The cold, hostile environment; the confinement and, above all, the asphyxiating suspense make it a fascinating film. It keeps you glued to your seat with your eyes on the screen at all times. Eastwood’s enigmatic face is key to the success of the film, as is the exceptional location and the true story behind it. For some reason, stories based on real events always arouse more interest in the audience.

The maximum security prison on an island supposedly ensured the confinement of its prisoners. And yet, some of them successfully escaped. Nobody knows if they survived or not and that’s one of the reasons why Alcatraz is well-known around the world. The movie mythicized this image and allowed for the collective imagination to make their own assumptions.

Don Siegel gave us the prison film par excellence. He brought the drama and anguish to the movie theaters and made us empathize with the prisoners who were there. We understood why the one thing they lived for was their freedom.

Alcatraz Island is located in the vicinity of San Francisco Bay in California. It used to be a military fortification, although it’s best known for housing infamous prisoners such as Al Capone. The prison closed its doors after 29 years of operation and was then occupied by several Native American tribes. Currently, Alcatraz Island is a national park.

During its years as a federal prison, it also offered housing for its employees and their families on the island. The main function of Alcatraz was to house extremely dangerous prisoners. The ones who were a liability even inside other federal prisons and whose reinsertion into society the authorities considered impossible. The place was nearly inaccessible and it guaranteed maximum security. The prisoners weren’t even allowed to speak to each other.

In some way, a certain halo of mystery and terror was created around the prison. On the one hand, it housed the most dangerous prisoners. On the other, there were rumors of countless atrocities going on in Alcatraz. The suicides among the prisoners increased while others such as Rufe Persful mutilated their fingers, and so on.

Alcatraz had a bad reputation for a long time and what happened there remained secret. In spite of it, the rumors became stronger. However, it seems there were people who pointed out that the conditions of the prison weren’t as bad as they seemed. Moreover, there were even prisoners who asked for their transfer to Alcatraz claiming that the food was better than in other prisons. In any case, the controversy never stopped. Everything seemed to indicate that Alcatraz was a place where hostility ruled.

In its last years of operation, many of the prison’s strict rules were either eliminated or softened. There were several attempts to escape from this prison, but only two events made history.

The mastermind of the escape plan was Frank Morris, a thief accused of possession of narcotics and armed robbery, with an IQ much higher than the average. Brothers John and Clarence Anglin managed to escape along with him. In addition, Allen West also collaborated with them and was ready to flee but failed to due to a problem in his ventilation duct. The plan was absolutely perfect and the prisoners subsequently disappeared without a trace. The FBI declared them dead, but the mystery lives on.

There are claims that the Anglin brothers’ mother received two bouquets of flowers every Mother’s Day. There’s also a photograph that supposedly shows they were still alive. In 2013, the FBI reopened the case after receiving a letter signed by John Anglin in which he claimed that the escape was successful and that he was ill at the time. We’ll never know what happened, but the mystery is what makes this story attractive.

We like them because they feed our imagination and we can relate to thekr common goal: the desire to break free. This film puts images in our imagination and allows us to visualize how exceptionally wonderful the escape was. It definitely turned the alleged criminals into heroes as they challenged a hermetic system and achieved the thing everyone wants: freedom.

Escape from Alcatraz: A Claustrophobic Road to Freedom

The film begins with a sort of ghostly scene of Alcatraz Island in the middle of the night. The rain and the music keep us alert. Then there’s Frank Morris, advancing in the darkness in the custody of the guards that lead him to the prison. There’s a shot of the lighthouse in the distance and, little by little, we get near the island. This is a great introduction, all the elements are in perfect harmony and successfully introduce the viewer to the story.

The film presents Frank Morris as a silent character who seldom speaks. His face is cold and distant and is nearly expressionless. Clint Eastwood portrays the character to perfection. Siegel takes good advantage of his enigmatic face, of his gestures and expressions.

We get to know Frank progressively, finding out that he’s unusually intelligent, much much than the average. Still, we don’t know him deeply. The aura of mystery created around his character is fascinating. Likewise, the creative team perfectly exploits the rest of the prison inmates and workers throughout the plot.

Escape from Alcatraz immerses us in the darkness of the prison and the difficult life of the inmates. It shows us how exceptionally astute Morris is. The blunt realism and the detail with which the viewer gets to experience all the steps of the plan and their execution make the film a masterpiece. The tension only increases from beginning to

For example, we already know the ending, but we want to see how they achieve it. We perceive the anguish of the characters and their fears and concerns. The characters’ desire for freedom is so strong that even their fear of discovery or death by shooting doesn’t stop them.

Then, we’re getting closer to the ending of the movie and we get a break. The waves instill relief. A little ray of hope that’s the opposite of the dark, suffocating atmosphere we saw at the beginning.

Escape from Alcatraz provides us with the opportunity to delve into one of the great mysteries of the twentieth century. It leaves it open just like the actual ending in the real story. The film plays with subtleties; with nonverbal language, and with the anguish and claustrophobia that confinement produces. But, above all, with the desire for freedom. So, the film becomes a real lesson in suspense and, ultimately, cinema.

In the end, we only have one question: what’s freedom? Perhapsb they didn’t survive. And perhaps they did but, even if they hadn’t, they’re still free. This is because death is always more liberating than life itself. The main reason why we like this story so much is that it connects us with that feeling all humans want: freedom.

One Flew Over the Cuckoo’s Nest: Freedom and Madness
One Flew Over the Cuckoo's Nest is a statement against asylums and mental institutions. It's a film worth discussing and analyzing. Read more »
Link copied!
Interesting Articles
Cinema, Television, and Psychology
This Short Will Show You the Richness of Uniting Our Differences