The Emotional Pendulum: From Being Silent to Screaming

Repressing anger is never a good thing. When you bottle up your aggressive feelings, they build up and lead to an emotional pendulum, where we first keep silent and then we let out our uncontrolled anger. 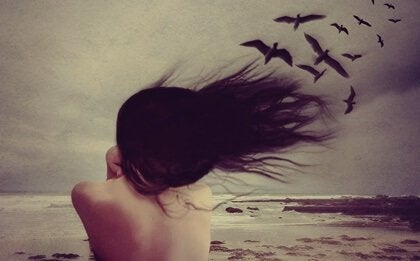 It’s not an exaggeration to say that we’re a little illiterate when it comes to emotions. We’re generally taught how to think and what to value, but not how to deal with emotions. Supposedly, morals and ethics guide our actions and that’s it. But emotions also play an important role. Yet, they don’t teach us this at school. That’s why, when we reach adulthood, many of us still don’t know how to handle our emotions. That leads to an emotional pendulum.

People generally don’t know how to process anger, one of the most misunderstood emotions. An emotional pendulum arises when a person decides to bottle up their grievances or keep quiet any issues they have with someone. After a while, all of these build up and explode like a pressure cooker. Therefore, the pendulum swings between two extremes: silence and screams.

People who fear their own emotions, especially anger, tend to be in emotional pendulums. Likewise, these people also don’t know how to limit the way people treat them. That’s what leads them to swing between the two extremes and to improperly manage their aggressive feelings. However, you can always learn how to manage your emotions better.

The emotional pendulum and self-control

The main difference between the two is that whoever practices self-control develops this ability before any high emotional intensity situation. In other words, they’ve put in the necessary work to maintain a state of serenity. It’s a lifestyle in which you’re conscious of caring about yourself. Thus, the people who practice self-control will hardly ever lose their emotional balance.

In contrast, repression means containing. You experience emotions with deep intensity but avoid expressing them. In that case, there’s a breach between the internal and external.

It’s true that sometimes we have to take advantage of that repression to prevent an undesirable situation from getting worse. However, those with repression tendencies take this one step further. In reality, they’d like to express themselves but for some reason can’t do it.

The vicious cycle of the emotional pendulum

The same people who tend to repress themselves are the ones who frequently present an emotional pendulum. This repression is the cause of their absolute silence or their piercing screams. They generally don’t feel like they can express whatever is bothering them. Thus, they think that there’s no way to express their disagreement without anger. Consequently, all this leads to a conflict, which is precisely what they wanted to avoid in the first place.

In addition, they generally don’t feel like they have the right to express anything they don’t agree on. For some reason, they think their emotions aren’t worthy enough or legitimate enough to be expressed and taken into account by others. They keep quiet and repress themselves because something or someone has made them believe that they shouldn’t say what they’re feeling.

All that discomfort they’ve bottled up always reaches a breaking point. It’s at that moment when their feelings finally take over. What they’ve really been keeping inside is a time bomb which sooner or later ends up exploding. And the cycle keeps repeating itself over and over again.

There’s practically only one thing you can do to not fall into that emotional pendulum of extremes. The solution is obvious: say whatever is bothering you as soon you feel it. Don’t wait for the best time to do it or until you’re full of reasons to speak out. By immediately saying whatever you have to say, the emotional burden won’t be as heavy as if you wait and bottle up your anger.

Keeping things to yourself is like setting a trap. There comes a point where it’s physically impossible to be assertive because there are too many emotions bottled up. Assertiveness is the ability to say things so that others can understand them properly. Be clear and respectful at the same time. Above all, be consistent. Say what you think or feel.

When there’s a lot of accumulated anger and you end up exploding, it’s basically impossible to be assertive. Anger and resentment blind us and don’t allow us to communicate. Repression never works. On the contrary, it poisons us internally and ends up hurting others as well.

The Rational Rider and Emotional Horse: Finding Balance
The brain is divided into two sides, the right "emotional" side and the left "rational" side. Learn about achieving balance between them in this article. Read more »
Link copied!
Interesting Articles
Personal Development
The Roadmap: The Importance of Having a Life Project

Wellness
Hyper-Empathy Syndrome: Too Much of a Good Thing

It's like people with hyper-empathy syndrome have long antennas that pick up on every emotion vibrating around them. But they…