It's been proven that there's a clear relationship between electronic devices and sleep alterations. Some pieces of research indicate that devices of this type influence circadian rhythms, which are responsible for wakefulness and rest. 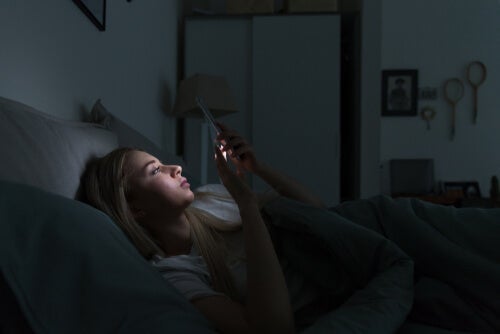 Recently, we found some pieces of research regarding electronic devices and sleep alterations. According to them, both factors are deeply related. Basically, it’s been established that electronic devices have the potential to disturb normal sleep patterns and, as a consequence, alter their quality.

This issue is worrisome, to say the least. If you really think about it, the amount of people who excessively use their phones, computers, and other electronic devices on a daily basis keeps increasing. Likewise, the number of individuals who can sleep only with their phones on their bedside table or who take their laptop to bed to continue working is increasing.

There’s evidence that all these behaviors can pose problems in an individual’s life. Undoubtedly, there’s a link between electronic devices and sleep alterations. The National Sleep Foundation of the University of California has concluded that devices of this type lead to shorter and worse quality sleep.

Circadian rhythms are the processes that take place in living beings in less than 24 hours. These cycles always follow the same order, and not only that but they follow each other in stages. Among many other aspects, these rhythms regulate sleep cycles. They’re equivalent to what’s commonly known as a biological clock.

The Philosophical Transactions of the Royal Society journal published an investigation carried out at the University of Connecticut. This study concluded that artificial light had the potential to alter circadian rhythms. In particular, it can affect the sleep cycle.

This piece of research established a direct relationship between electronic devices and sleep alterations. For one, these devices work with artificial light. Secondly, sleep is very conditioned by circadian rhythms. As a matter of fact, they make the organism more active when there’s light and more passive when there’s darkness.

There are specialized cells in the retina which help determine circadian cycles. When the screens of electronic devices are turned on, there’s a distortion. Thus, daytime functions are activated at a time when it’s necessary for them to be deactivated in order to be able to rest properly.

At the University of California, they reached similar conclusions to those indicated in the previous section. In fact, they went even further. For one, they pointed out that blue light screens on computers and phones reduced the production of melatonin. This hormone affects the quality of sleep. When it’s low, it makes it harder to fall asleep and decreases its duration.

On the other hand, the lousy habit of keeping our smartphone or computer next to us even when we go to bed prevents the reduction of neuronal activity. These devices keep you alert, which is the opposite of what you look for before going to bed, which is to relax.

The worst part of it all is that, while you’re sleeping, your phone may still ring. Those who are very conditioned to use it wake up immediately to see who’s calling. And even if it doesn’t ring, there’s a subjective tension due to the possibility that it might. This affects quality of sleep big time.

Psychiatrist and psychoanalyst David Dorenbaum states that electronic devices and sleep alterations form a binomial which can lead to several results. He establishes that the intensive use of these devices makes it more difficult for individuals to remember their dreams. In other words, there would be an analogy between the world we see through screens and our actual dreams.

In fact, a study conducted with 1,000 students from Australia aged 13 to 16 showed that these devices were associated with a lower quality of sleep, which, in turn, would have adverse effects on mental health. As a result, the young people in the sample manifested greater signs of depression.

Electronic devices per se aren’t the problem. The real issue lies in their misuse. When they’re well-managed, they make life easier for us in many different ways. However, when they’re poorly managed, they make human beings vulnerable and incredibly dependent on their availability.

“Sleep is the best meditation.”

The Importance of Getting a Good Night’s Sleep
Not getting a good night's sleep has many other negative consequences than just physical fatigue. Learn more with us in this article! Read more »

Health
Your Mental Health: Is It Worsening?

How do you know if your mental health is worsening? People tend not to notice when something's wrong with them.…

Tics are involuntary, recurrent, unpredictable, non-rhythmic muscle movements that can be temporarily controlled by willpower. Tics in childhood tend to…