Egas Moniz and the Amazing History of the Lobotomy 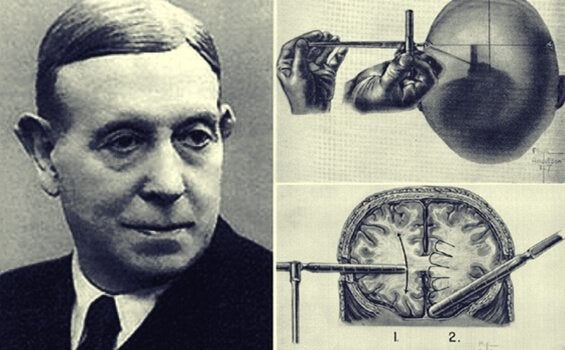 The lobotomy is one of the most controversial procedures in the history of mental health. It was “invented” by Egas Moniz, in the 1930’s and then became popular all over the world. Thousands of lobotomies were performed everywhere — until the 1950’s. That was when it began to fall into disuse due to its unpredictable and serious side effects.

The lobotomy is a surgical procedure that involves cutting connections of one or both lobes of the brain. It separates the prefrontal cortex from the other parts of the brain. The surgery is also known as a “leucotomy”.

Egas Moniz was not the first to try this type of procedure. In 1890 the doctor Gottlieb Burkhardt performed six surgeries of this type. Two of the patients died and therefore he stopped his investigations. In the late nineteenth century and the early twentieth century, the lobotomy claimed numerous victims around the world.

“Know all the theories. Master all techniques, but as you touch a human soul be just another human soul.”

In 1935, Egas Moniz, a neurologist and professor at the University of Lisbon, began his own “research” on lobotomy. We’ve put the word “research” in quotes because it was actually Moniz doing surgery on a chimpanzee. When he noticed that the animal became more docile, he deduced that it was applicable to human beings.

This “unscientific” procedure has been questioned for decades. However, no serious researcher can, from one single case, apply the conclusions to all cases and all patients. It’s true that single-case studies can be of great value for science, especially for rare diseases or to open wider fields of research. However, you cannot generalize research like this if the conclusions are not solid enough.

And, in this case, there was something that limits generalization even more: the lobotomy was done on a primate, not a human being. Even so, Egas Moniz won the Nobel Prize in Medicine in 1949 for his “invention”.

Egas Moniz worked with another neurologist called Almeida Lima. The two of them carried out the first lobotomies. The procedure consisted of making two holes in the patient’s skull. Then an injection of alcohol was applied to the cortex to kill that part of the brain. He and his partner were the ones who evaluated the progress of the patients after the operation. Unsurprisingly, they saw progress in every case.

Once Egas Moniz began to popularize his invention in Europe, he was emulated by neurologists everywhere. The most famous of them was Walter Freeman. This man was not really a surgeon. Even so, he developed a technique that became known as the “ice pick lobotomy”.

This American doctor discovered that he could access certain areas of the brain more easily through the eyes. He would insert an instrument similar to an ice pick through the eyes, “stir a little” and get to the brain. He was able to do lobotomies in just 5 minutes.

Such was the degree of “industrialization” that Freeman achieved with this procedure that he began to offer the service “at home”. He had a van that he called “Lobotomobile”. In it he toured the United States doing lobotomies left and right, for all kinds of psychological problems. The estimate is that in those years between 40,000 and 50,000 patients were lobotomized worldwide.

The proscription of lobotomy

Many of the patients undergoing lobotomy died. Others suffered serious brain damage, which sometimes became apparent immediately, and other times years later. A good many of them ended up in a vegetative state, and others suffered cognitive regression. The procedure was still around, though, because in about one third of patients, symptoms improved.

The lobotomy didn’t intend to cure any mental illness. Instead, Moniz’s goal was to “calm” the patient. The cruelty, then, of lobotomizing people with anxiety disorders, obsessive-compulsive disorders and suicidal depression is evident. Surgeons performed it on many schizophrenic patients, but they in particular didn’t show any improvement.

Basically, the lobotomy cut patients off from the world. That’s why they “calmed down”. Many people looked at it hopefully because at that time — and even today in some places — mental patients lived as prisoners in mental asylums and psychiatric hospitals. But the lobotomy allowed many of them to go free.

The lobotomy began to fall into disuse in the 50’s with the invention of “Thorazine”, the first antipsychotic. Interestingly, its inventor called it the “chemical lobotomy”. In the 70’s most countries banned the procedure, though we know that some still secretly perform it today.

In more recent news, a group of citizens has been demanding that the Nobel Prize in Medicine be withdrawn from Egas Moniz because they feel that his “achievement” did more harm than good to humanity.

Frances Farmer, The Actress Who Ended Up Lobotomized
Frances Farmer was an actress in the 50's with a strong personality. Hers is a sad story of rebellion being called crazy. Read more »
Link copied!
Interesting Articles
Culture
The Poisoned Arrow: A Buddhist Story about Living in the Present

One of Buddha's greatest tenets was about living in the present. We can see how some of his principals are…

Over the years, psychology has adopted a wide array of approaches to understand and address human behavior. Each approach has its theoretical foundation and practical applications. For more than three…

Culture
What Five Minutes of Silence Can Do For Your Brain

Sometimes five minutes of silence is enough to recover your calm, balance, and peace. Just a brief moment  away from…

Most Laozi quotes are aimed at pointing out principles for good living. That’s why those who follow them and the Tao…