The Sweet Story of Koko, the Smartest Gorilla in the World 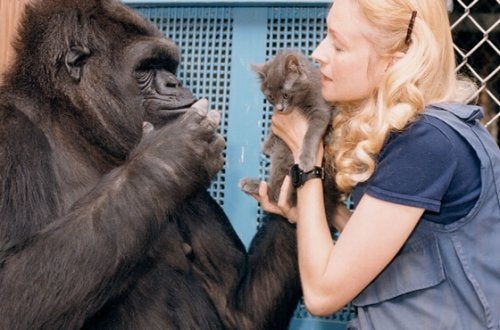 Not everyone knows the story of Koko, the smartest gorilla in the world. This beautiful animal was born in a zoo in San Francisco in 1971. Then psychologist Francine “Penny” Patterson decided to adopt her for a study at Stanford University.

The original idea was to do a linguistic experiment. The psychologist wanted to teach her American Sign Language. If she was able to do it, she could communicate with Koko and find out firsthand how a primate thinks.

After working with Koko for 43 years, the only conclusions we can draw are that she hasn’t stopped surprising everyone who meets her. Her progress is impressive.

Not only did she learn perfect sign language, she has also sent tender messages to the world. She has shown that she is more than a few simple tricks.

Dr. Patterson believed the opposite, and it showed in her patient instruction. The first sign that Koko was understanding was the fact that she created new words.

One example is the word ring. Her teacher taught her the word “bracelet” and the word “finger”, but not the word for “ring”. One day, Koko combined the signs for bracelet and finger to refer to the ring that her teacher was wearing.

And there are videos in which the gorilla is pronouncing onomatopoeias. In other words, she is deliberately producing sounds to communicate something. Some believe that she might be able to say some words someday.

The beautiful story of Koko and All Ball

Dr. Patterson often read stories to Koko. The gorilla’s favorites were “Puss in Boots” and a story about three kittens. Koko asked her teacher to read the stories almost every day, over and over again. One day, to everyone’s surprise, she told Dr. Patterson that she wanted a cat.

Coincidentally, someone had abandoned three kittens close to the farm where Koko lived. One of them was a female without a tale and Koko adopted her.

In sign language, she named her “All Ball”. From that moment on, they became inseparable friends. She took painstaking care of her, they played together, and Koko was always looking after her.

Afer 15 years of friendship, All Ball was hit by a car and died. Patterson told the gorilla that she wouldn’t see her friend again.

Koko signed that she felt sad. There is a video in which she seems to sob when she is alone. This incident cast doubt on long-held ideas about what animals like Koko think. She was aware of death.

Researcher Maureen Sheehan interviewed Koko about what happened. In sign language, she answered that gorillas die “because problems” or “because old”. She also indicated that after they die they go to “a comfortable place”.

When Sheehan asked her if gorillas were happy or sad after they died, Koko said that they were neither. They were just asleep.

One aspect of this story that got a lot of attention and video documentation was the relationship between Koko and the actor and director, Robin Williams. After All Ball died, Koko was sad for a long time.

But she smiled again when Williams visited her and told her some jokes. She really liked the actor. When her caregivers told her about his death, Koko expressed deep sadness.

Another amazing thing happened when an expert explained climate change to Koko. She looked shocked and very interested in the subject.

Afterwards, she sent a message to human beings using signs. She asked us to take care of the planet. To not be stupid. And she said, “Nature is watching”. This is also captured on video.

The experiment with Koko not only demonstrated that her species is very intelligent, but that they have a rich emotional life. It also shows that they are capable of rational and moral judgments.

Koko’s example confirms what many of us have felt for a long time: that animals and humans have a bond, and that we are more alike than we are different.

An Animal’s Eyes Have the Power to Speak a Unique Language
When I look into the eyes of my dog, my cat, or any other animal, I do not see an “animal.” I see a living creature like myself, a friend, a soul that feels Read more »
Link copied!
Interesting Articles
Culture
We are Stardust: We're Made to Shine

In his book, "The Cosmic Connection," teacher Carl Sagan explains that human beings are made of an extraordinary substance: stardust.  In…

Contrary to popular belief, Hallmark didn't invent Valentine's Day to sell more products. Behind all the marketing, presents, trips, and…