The Effects of Pesticides on the Brain

Discover the serious effects of pesticides on the brain in this article! 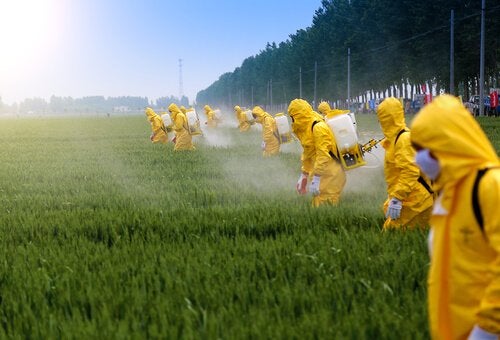 The effects of pesticides on the brain can be quite serious, especially when the individual is exposed to them for a long time. Each year, the chemical industry recalls hundreds of products from the market because they realized they had high toxicity rates.

Nowadays, we’re all exposed to a multitude of chemical products. However, said chemical products haven’t undergone sufficient laboratory studies to completely rule out their toxic effects. Pesticides on their own don’t damage our health. Instead, the mixture of several components is what causes devastating long-term consequences.

On the other hand, pesticides can also affect children’s brains. Exposure to polluting chemicals can affect their brain development. As a matter of fact, this can happen even during gestation. If this exposure is prolonged, other areas may also be affected. Actually, these substances can play a big role in the manifestation of disorders such as autism and attention deficit hyperactivity disorder.

First studies on the effects of pesticides on the brain

In 1962, biologist and conservationist Rachel Carson published her first book, Silent Spring. Many consider this book the main promoter of modern environmental awareness. This book was the first to warn about the harmful effects of pesticides on the environment. Silent Spring alarmed so many people that the USA was forced to ban the use of the ever so popular insecticide DDT.

Throughout the 70s and 80s, several studies regarding the effects of pesticides on the brain were carried out. Consequently, various groups of scientists showed that prolonged exposure to organochlorine pesticides produced alterations in the central nervous system (CNS). In fact, most studies clearly showed learning and memory deficits, as well as motor and behavioral alterations.

Consequences of prolonged exposure to pesticides

Pesticides can be toxic to both humans and animals. Some toxins are so strong that they’re lethal in very small amounts. Now, there are less aggressive toxins that don’t cause immediate damage. However, the fact that they’re able to cause long-term damage makes them just as dangerous as the others.

The toxins in pesticides can stay in the body for a long time. The organism can react to them in different ways. This depends on a few factors such as exposure time, the type of pesticide, and the individual’s resistance to chemicals.

The journal JAMA Neurology published a study on how the environment influenced Alzheimer’s disease. The researchers concluded that being exposed to a pesticide such as DDT increases the likelihood of suffering from this disease.

This type of pesticide was used until the mid-’70s in the USA and until 2008 in Spain. The reason it remained legal in Spain is that it was an instrumental ingredient in the fabrication of dicofol, a type of pesticide.

Researchers conducted a study that aimed to relate pesticides to Alzheimer’s disease. In order to carry it out, they studied two different groups of patients suffering from this neurodegenerative disease. They were able to draw an interesting conclusion. The Alzheimer’s patients who had high levels of pesticides in their blood had developed a more severe cognitive deterioration compared to the patients of the control group. The second group of patients developed this disease but had no pesticides in their blood.

These data on the effects of pesticides on the brain are impressive. However, this association can explain only some cases of Alzheimer’s. Regardless, this study is striking since it clearly shows that there’s a correlation between pesticides and this neurodegenerative disease.

We can’t overlook that autism has an important genetic component. However, the environment also plays a big role. One of the risk factors that increases the likelihood of developing autism is the exposure to pesticides during pregnancy. For example, in a University of California study, researchers were able to relate exposure to pesticides and other compounds during pregnancy to the advancement of this condition.

In addition, they concluded that exposure to pesticides can alter the methylation of the DNA of the placenta. This can change the functioning of this organ and alter fetal development. Thus, it can lead to a higher risk of autism.

Parkinson’s disease is a chronic neurodegenerative disorder caused by the destruction of the neurons of the central nervous system. The central nervous system neurons use dopamine as a primary neurotransmitter since it’s responsible for transmitting the necessary information for body movements. As of now, its cause is still unknown.

A group of scientists led by Dr. Francisco Pan-Montojo confirmed that one of the effects of pesticides on the brain is that pesticides increase the chances of suffering from Parkinson’s disease. Different epidemiological studies confirm that there are several toxic substances capable of producing the symptoms of this disorder.

As you can see, the effects of pesticides on the brain can be quite serious. Their use is very controversial and will probably continue being controversial as researchers delve more into their effects on people’s health. It’s true that modern agriculture as we know it wouldn’t exist without pesticides. However, are they more important than the health of thousands of human beings? It’s very likely that we’ll encounter new health issues related to pesticide use in the coming decades.

7 Signs of Early Onset Parkinson’s Disease
These seven symptoms can help you to indentify early onset Parkinson's disease in those under 50 years of age, including adolescents. Read more »

Interesting Articles
Psychology
Why Do People Harm Themselves?