Édith Piaf's real name was Édith Giovanna Gassion. It's said that she was born on a sidewalk in Paris. While her life was marked by tragedy, her voice was a source of great comfort to many during World War II, and her tenacious spirit has inspired many artists over the years. 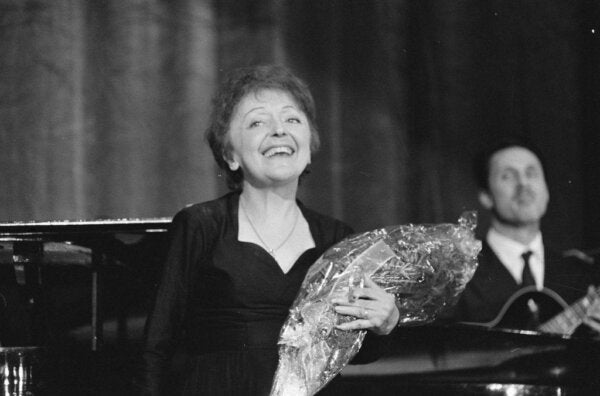 Édith Piaf has one of the most fascinating stories of any artist in history, not just because of the incredible transformation she underwent throughout her professional career, but also because of the terrible hardships she endured. She was, above all, an incredibly brave woman who overcame destitution and poverty to become a muse for many of the world’s most famous composers, and an inspiration for millions of people.

Piaf was known for her short stature and petite frame, which earned her the nickname the “Little Sparrow of Paris” early on in her career. She sang from the soul, rather than the throat, and her unique style left a lasting impact on the era as a whole. She was the star of the 1950s music scene and a Parisian icon around the world.

While Édith Piaf led an extraordinarily tragic life, those who knew her remember her for her fantastic personality, great generosity, and incredible selflessness. People say that only two moments in history have halted Paris: the end of World War II and the day of Édith Piaf’s funeral.

Édith Piaf was born on the streets of Paris

Édith Piaf was born on December 19, 1915, on a street in Paris. Her father was a circus acrobat, while her mother was a singer and circus performer. When her mother first went into labor, Piaf’s father celebrated the occasion by drinking heavily. Her mother tried to make it to the hospital on her own but couldn’t get there in time. As a result, baby Édith was born under the street lights of the Rue de Belleville in Paris.

Both her father and her mother were alcoholics. Her mother, Annetta, decided to leave her newborn daughter in the care of her maternal grandmother. Her grandmother often gave her wine instead of milk, claiming it was good for the health. She was later sent to live with her father, who, in turn, decided to leave Piaf with her paternal grandmother, who ran a brothel in Normandy. There, she was mainly looked after by prostitutes.

Piaf earned a living by singing in the subways and cafes of suburban Paris. When she was 16, she fell in love with 17-year-old Louis Dupont and soon became pregnant. She eventually gave birth to a daughter named Marcelle. When Marcelle was just two years old, she contracted meningitis. It’s rumored that Piaf was forced to prostitute herself for a night to raise the money to care for her child. Sadly, however, Marcelle soon died, leaving a mark on her mother’s soul forever.

The Little Sparrow of Paris

Piaf’s life changed forever when a passer-by stopped to listen to her singing in the street. The man was Louis Leplée, the owner of one of Paris’ most famous nightclubs. He asked her to do a short audition before immediately hiring her. Leplée taught her to become the great star that the world would come to know and love, and she enjoyed almost instant success. However, when Leplée was murdered, Piaf was considered a suspect. Parisian society quickly turned against her, and she once again found herself singing in rundown bars.

Composer Raymond Asso, who she later became romantically involved with, came to her rescue, helping her to achieve her dream of finally becoming a professional singer. Piaf became a star, and soon, some of the greatest composers of the time began writing exclusively for her. She was adored by the Parisian public, and later by people all around the world. She even dabbled in cinema and continued singing throughout the Nazi occupation of France. In fact, she was even considered the guardian of Jewish artists and musicians.

When the war ended, Piaf wrote the lyrics for her most famous song, “La Vie en Rose”. By then, she was caught up in a torrid romantic relationship with Yves Montand. In 1947, the two left Paris together to start Piaf’s United States tour. However, they separated a short time later.

A sad end to an incredible life

In 1948, Édith Piaf met the man who would become her greatest love, boxer Marcel Cerdan. However, she was only with him for a year, as Cerdan was killed in a plane crash in 1949. By this time, she had already developed a number of serious addictions. The pain of this latest loss was almost unbearable and led her to become addicted to morphine.

Also, she had several romantic relationships with well-known celebrities, including Marlon Brando, Georges Moustaki, and Charles Aznavour, among others. At the same time, her fame continued to grow… as did her addiction to morphine. Her health noticeably began to deteriorate, to the point where, on one occasion, she actually fainted on stage.

In 1961, she performed her immortal song, “Non, je ne regrette rien” (No, I regret nothing) at the Olympia in Paris, to the great wonder and excitement of spectators. In 1962, she married 26-year-old Theo Sarapo. She was already very ill at the time of her marriage, and died just one year later in Paris, at the age of 47.

If Everything Goes Wrong, You Can Always Turn On Some Music
Music is a pleasure that everyone can have access to. Many researchers believe that it served as a means of connection within groups Read more »
Link copied!
Interesting Articles
Literature and Psychology
Hercules Poirot and His Little Grey Cells