Joan Báez: The Biography of a Singer and Social Activist

Joan Báez is a woman with overwhelming energy and faith and who knows how to exert influence on others. Her fight for life and human rights has been the constant of her life. 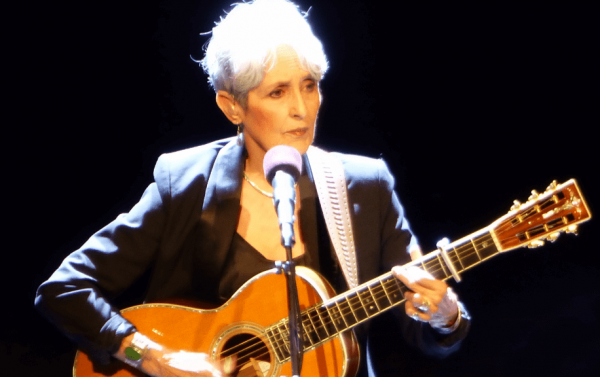 Joan Báez is an icon of her generation thanks to her music and social activism. Her real name is Joan Chaudas Báez and she was born in New York in 1941. From a young age, she was involved in plenty of civil cases, probably due to the influence of her family’s anti-war ideals. The weapon she uses to fight for her beliefs is music and, with it, she’s made a large number of protests and social demands to more than half the world.

In plenty of countries, Báez became the voice of the marginalized, the persecuted, the missing, and the massacred. She also founded a lot of organizations against war and violence, putting her life in danger on numerous occasions. Joan Báez is a very relevant figure in social activism. Admirably, she lives and works according to her ideals. She’s what you would call a “convinced pacifist”.

“The easiest kind of relationship for me is with ten thousand people. The hardest is with one.”

She’s the daughter of a Scottish mother and Mexican father. Her family moved many times because of her father, who was a renowned scientist and had to relocate often. Together, they toured the United States, Europe, and the Middle East. Joan Báez’s father rejected several important offers to work in the arms race. He was a man of strong convictions, a trait his daughter clearly inherited.

From a very young age, Joan Báez began to compose music that allowed her to raise her voice against wars and all forms of violence and social oppression. During her teenage years, she participated actively in the March on Washington for Jobs and Freedom, greatly influenced by Martin Luther King Jr.’s speech. As a matter of fact, it was in that march where everyone learned her song “We Shall Overcome”.

Moreover, she positioned herself firmly against the Vietnam War. In addition to this, she supported the Fiscal Resistance initiative, which consisted of citizens withholding 60% of their income taxes so that they weren’t destined for war. In 1965, she founded the Institute for the Study of Nonviolence.

The initiatives for peace

In the 70s, Joan participated in the founding of the American section of Amnesty International. Shortly after, she founded a very active group for the defense of human rights called Humanitas International. On the other hand, she spread a critical view on governments in democracy and authoritarian regimes indistinctly from Humanitas International. For all these reasons, she received many attacks, both from right-wing and left-wing factions.

Slowly but surely, she started becoming critical of the politics of the United States in the Vietnam War. She directed publications to the most important newspapers in the United States, expressing her disagreement with her country’s attacks in Vietnam. Finally, she joined a peace delegation in 1972.

“If you don’t have music, you have silence. There’s power in both.”

Activism outside her country

During the 80s, Joan Báez toured several countries under totalitarian regimes. In these places, she received numerous death threats, and her security was seriously compromised. In 1981, she made a trip to Chile, Brazil, and Argentina, and upon her return to the United States, she became the voice of the mothers and grandmothers of the thousands of people who were missing in Chile and Argentina. Additionally, she presented a report on the matter to the United States government.

In 1989, she composed a song called “China”, inspired by the protests in Beijing against the violence of the Chinese regime. Then, she went on a completely humanitarian trip to Asia where she brought food and medicine to Cambodia. Later on, she actively participated against the US invasion of Iraq and against the death penalty and the repression of the gay community in the United States.

The social activism of Joan Báez

Now, in the 21st century, Joan Báez is far from retiring and resting. In fact, as of now, she continues to participate in numerous initiatives encouraging young university students to vote for pacifist leaders. In addition, she has initiated several movements against poverty and marginalization in the United States, especially the immigrant community.

She’s received the Thomas Merton Award and many other awards for her tireless activism. She’s a woman with overwhelming energy and faith and who knows how to exert influence on others. Her fight for life and human rights has been constant. Even today at the age of 75, she’s actively participated in feminist marches in the United States against the Trump administration. Many young (and not so young) people all around the world consider her an inspiration.

Malala Yousafzai: A Young Human Rights Advocate
Malala Yousafzai won the Nobel Peace Prize in 2014, at the age of 17. She stands out because she fights for the education of young girls.  Read more »
Link copied!
Interesting Articles
Biographies
Frédéric Chopin, A Biography of the Piano Poet