The Matt Groening series Disenchantment didn't get off to a great start, mainly due to the fact that the shadow of its predecessors was too heavy. With the new season, the series is taking shape and Groening is showing us what he's capable of. 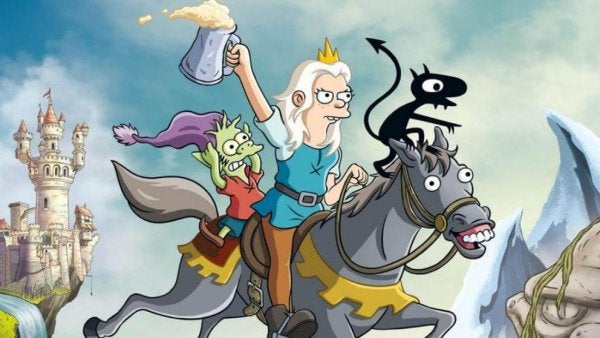 Last year, Disenchantment arrived on Netflix to very mixed reviews. The animated series was penned by Matt Groening, the acclaimed creator of The Simpsons and Futurama. His fans eagerly awaited Groening’s new offering, although they didn’t exactly know what to expect.

The critics scrutinized every aspect of the series and, after a bit of a shaky start, they ended up praising this satire that’s set in a somewhat crazy Middle Ages.

Disenchantment distances itself temporarily from its older predecessors. The Simpsons is set in a recognizable present-day that seeks to parody the current American society and Futurama invites us to think about the future. However, Disenchantment takes us on a trip back to the past. It’s a past with clear allusions to the Middle Ages. However, there’s a fantasy element with clear mythological influences and full of superstition.

In a kingdom called Dreamland, lives Princess Tiabeanie – Bean to her friends. Everything starts when, after having previously agreed to marry, the young princess decides to run away and escape her marital obligations. The reason? She prefers beer and adventure to being married to a prince she doesn’t love.

Bean is set to embark on a journey in which she’ll try to find herself and escape from conventions. As a result, she triggers an infinite number of catastrophic and crazy situations. On her journey, she won’t travel alone. By her side, she’ll have Luci, her personal demon, who’ll try to take her to the dark side. As a contrast, she’ll also have Elfo, a little elf fed up with the optimistic and joyful life of her village. He’ll plunge headlong into the darkness and depression of the human world.

In terms of humor, Matt Groening creates an environment that we don’t quite fit in with. However, in the end, it leaves a good taste in our mouths. Here are some of the main ideas behind the second season of Disenchantment.

I have to admit that, at first, the idea of a new series by Matt Groening for Netflix had me puzzled. It’s been a long time since The Simpsons and Futurama were released and audiences and trends in animation have changed dramatically. We all have nostalgic memories of the best years of The Simpsons and Futurama, but, these days, things are very different.

Many people misunderstood Futurama, and, finally, the powers-that-be canceled it. On the other hand, The Simpsons is far from its glory days. Series like Family Guy (Seth McFarlane, 1999) grew up a bit in the shadow of Groening’s creations but ended up forcing it to change in ways that don’t work at well in a classic like The Simpsons.

So, why Netflix? It means a new production, more freedom for the writers – this can be both a good and bad thing. There is also a clear tendency towards serialization. And that’s precisely where one of the problems of Disenchantment lies.

More of a series

Far from being short and self-concluding episodes, Disenchantment is closer to being an ordinary series. The plot develops progressively, with cliffhangers that aim to hook the viewers. There’s also more of a dependence on cheap humor.

The problem is that Disenchantment doesn’t pretend to be serious, but rather a comedy, and, in comedy, less is more. The shorter and more condensed it is, the better. The viewer isn’t looking so much to be glued to the screen but rather to have a laugh.

The humor, in turn, tends to become a bit absurd, something that wasn’t a problem in The Simpsons and Futurama. This was because, in those series, there was a balance between critique and the absurd. However, in this medieval satire, nonsense tends to overshadow a critique that isn’t up to par and not biting enough.

Comparisons are inevitable, but not beneficial, and, perhaps, if it hadn’t been in the shade of its predecessors, Disenchantment mightn’t have found so much trouble fitting in. In its defense, we would say that, even though this new format may disconcert the viewer, it ends up playing a nice trick on them.

As you keep watching, you’ll discover a more complex, more entertaining panorama, with some episodes that do live up to expectations. Let’s also remember that The Simpsons didn’t grab our attention right from the first episode either; viewers fell in love with it progressively.

The characters are written well, and the allusions to other series, in particular Game of Thrones, end up creating a story that hides much more than you’ll realize. You may not like Disenchantment from the first episode but you’ll probably be hooked by the middle of the series. By the second season, the formula is repeated, and it’ll all start to finally make sense.

If there was one thing that characterized its predecessors, it was the fact that there was a criticism based on parody. The caricatured realities of the present and the future characterized the animations of Matt Groening and enabled them to become classics. Disenchantment doesn’t only parody the past but also the present, since it has to adapt to present-day demands.

It isn’t surprising, therefore, that the main character is a woman, a princess who is disenchanted with the times she lives in, and who decides to take control of her life, albeit in a catastrophic way.

Bean isn’t a fairytale princess. She isn’t a princess who embodies the exemplary values of the Middle Ages. She is, in fact, a complete disaster. Everything goes wrong for her and she sows chaos wherever she goes. She has problems with alcohol and she isn’t beautiful.

Together with her companions, Elfo and Luci, she leads a trio that, at times, reminds us of Fry, Bender, and Leela from Futurama. They’re a trio that will end up in the most insane situations.

Criticism of inequality for women is evident from the start, and Bean defies all the rules and follows her instincts. In this second season, we witness a real parody of medieval societies – but also of some more modern ones.

The series ridicules the figure of the king, and shows him to be a puppet whom his advisors use for their benefit. Among them, we find a kind of cult that alludes to the Church. Neither the king nor the people seem to matter too much. Everyone looks out for their own interests in the palace, while the king enjoys copious meals on his throne, totally unaware of what’s going on in his kingdom.

Superstition and religion intermingle in the cult that dominates Dreamland. We see some characters who don’t believe in science but in magic. They condemn witchcraft and control public opinion at will. Thus, the king’s advisors are the ones truly in control of Dreamland. They get involved in a kind of ritual of a sexual and religious nature, while, at the same time, dictating the rules of society.

The first season of Disenchantment was an appetizer, a presentation of Dreamland, and the rules that govern it. The second season shows itself to be more mature. It explores everything that they touched on in the first series in a deeper way. It starts to really pack punches and surprises with a critique that has more to do with the real world we live in and our historical past.

How did the season end?

The series bids us farewell once again with an ending that keeps us in suspense and leaves us wanting to find out more about the adventures of Bean, Elf, and Luci. It does so without abandoning the very careful design format that is quite close to steampunk.

With a caricatured and crazy vision of our past, it seems that Disenchantment, little by little, is finding its place. And who knows whether, in the end, it’ll maybe become as important a part of our memories as its predecessors did.

The Addams Family: Beauty in the Macabre
The Addams family has amazed us over the decades. What's the secret of its success and what has it got to do with our fascination with death? Read more »
Link copied!
Interesting Articles
Cinema, Television, and Psychology
The Wolf of Wall Street: Ambition and Power