Discover How Worrying Affects Your Brain

Stress, anxiety, chronic tiredness, lack of energy, and pessimism... The way worrying affects your brain is toxic. It pushes all your emotional resources to the limit until you're in a state of constant threat. 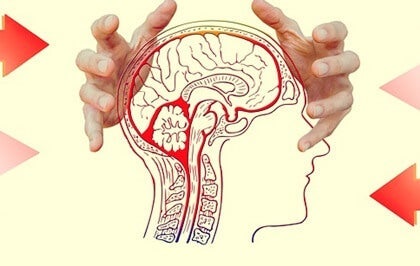 How worrying affects your brain is better described in one word: toxic, even though it’s a natural emotion when you perceive a threat. However, many of your concerns are unfounded and even obsessive. Furthermore, they lead you to high levels of exhaustion and you lose energy, courage, and every last bit of motivation.

Something we know well from a psychological perspective is that the effects of worrying too much can be even more dangerous than that which worries you. It particularly affects your brain. It may seem like a play on words, but it truly goes beyond this. When you remain in that state in which stress intensifies and distorts even the smallest detail, then everything gets out of control. You’ll make bad decisions and your emotional conflict will intensify.

For example, the more you obsess over your poor quality of sleep, the more insomnia you’ll experience. Likewise, the more you worry about proving yourself perfect and efficient at work, the more you’ll fail. Moreover, if you worry too much about your lover not loving you, then you’ll create situations in which the other person will feel pressured and uncomfortable.

Thus, the more pressure you add to your mind in the form of worrying, the worse it’ll affect your brain. You’ll exhaust its resources. Then, your memory will fail and you’ll feel more exhausted. The list of effects associated with excessive worrying is long due to the biology of stress. Let’s find out how it works.

How Does Worrying Affect Your Brain?

The way worrying affects your brain is much more intense than you may think. Neuroscientists such as Dr. Joseph LeDoux from New York University tell us that its impact is quite severe. Mainly because, on average, people just don’t know how to worry about things in a healthy manner. We have a curious tendency to panic and blow everything out of proportion.

However, he also points out another factor that, perhaps, exempts us from, at least part of the responsibility. Our brain is programmed to worry first and to think later. In other words, our emotional system and, in particular, our cerebral amygdala is the first to detect a threat and therefore activate an emotion in us.

C0nstantly, neurotransmitters such as dopamine are released and they generate anxiety and nervousness. Later, the limbic system stimulates the cerebral cortex to give notice to the higher mental structures. What’s the purpose? To encourage them to take control. Also, to make use of the logical reasoning that regulates that fear, that sense of alarm.

Dr. LeDoux reminds us that humans have more power than reasoning when it comes to emotions. Something like this only makes the concern and anxiety we experience quite powerful over your mind. The way in which worrying affects your brain is, therefore, huge and has the following effects:

What do we mean by “psychological pain“? Is it different from physical pain? Yes. In fact, it’s just as limiting. Thus, psychological pain is basically distress, exhaustion, negativity, and discouragement, among others.

In an anxious brain dominated by constant worries, you’re controlled by the amygdala. It makes you see the dangers where there aren’t any. Everything you perceive is a threat. You distrust everything and it all makes you afraid. Its hyperstimulation impacts your cerebral cortex, reducing its activity. Then, you start perceiving everything as chaotic and imbalanced.

Likewise, the amygdala activates various areas of cerebral pain such as the anterior cingulate cortex. Consequently, the discomfort intensifies.

“When I look back on all these worries, I remember the story of the old man who said on his deathbed that he had had a lot of trouble in his life, most of which had never happened.”

When Worrying Intensely Affects Your Brain, Your Cognitive Processes Fail

What do we mean by “cognitive processes”? That is, when worrying intensely affects your brain because we have weeks or months due to persistent thoughts, then you’ll begin to notice the following:

How to Stop Worrying

Actually, you shouldn’t stop worrying. It’s more about learning to worry well. Otherwise, as stated in a study carried out at the University of Cambridge by Dr. Ernest Paulesu, you’re at risk of developing a generalized anxiety disorder.

In order to learn to worry better, remember psychologist Albert Ellis’ advice. Let’s reflect on it:

To conclude, you can be more proactive by knowing how worrying affects your brain. Avoid falling into those painful cycles and make use of healthy and reasonable approaches. If you can’t do it on your own, then get professional help.

Can You Stop Your Racing Thoughts?
Since you can't really stop your thoughts, or at least doing it isn't easy, something you can do is try to take control over what you think. Read on! Read more »
Link copied!
Interesting Articles
Basic Psychological Processes
Chronic Stress Could Make You Lose Your Memory

Understanding that there are multiple types of attention is important. Most people believe attention is the ability to focus. Anytime someone is distracted or simply not listening to you, you…