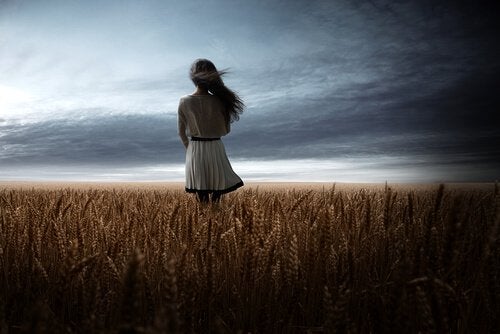 We tend to analyze relationships, but what happens when we’re single? Being single also defines us. It says something about us, how we are, how we perceive the world and – of course – how we see relationships.

There are people who decide to be in a relationship. Others, on the other hand, decide to be single. The latter are always believed to be single because no one wants them. However, this isn’t always the case. There may be several reasons why a person is single.

Perhaps she has had a bad experience in previous relationships and is much happier alone. Or, perhaps she wants to be single out of her own free will.

Let’s not forget that many people still see singleness as an unnatural state that’s not done on purpose. However, not everyone agrees with this.

Today, we’ll discover five different types of singles that you may or may not identify with. The reasons why they’re single are diverse and varies. After all, each carries with it an experience that has led to the decision to be single.

1. People who are single due to bad experiences

This first type includes everyone who has decided to leave a relationship due to bad experiences and instead move on and focus on themselves. Thinking about having another partner causes a feeling of rejection and even exhaustion.

Usually, these people have had very difficult experiences. Perhaps their partner had been unfaithful, had neglected them, or had mistreated them.

We can’t deny that these situations impact and leave a mark on the person who has suffered them. Sometimes, they can even cause philophobia, a strong fear of falling in love with another person.

2. People who are single due to a lack of self-esteem

There are people who have a strong lack of self-esteem. This leads them to devalue themselves in all aspects of their lives, including the sentimental ones. They think they’re not worthy of being loved and that the person next to them will be wasting their time on someone who’s not worth it.

In many cases, they believe that they aren’t attractive enough for another person to like them. Thus, they choose to not take care of themselves and hide from others. In this case, they may also be shy and even reject potential suitors.

With this attitude, they only deprive themselves of what they really want. This form of singleness could be considered the worst. After all, it’s not their own decision, but a consequence of how they see themselves.

3. People who are single because they want independence

Single people who love their independence like being free from any strong or serious bond that could bind them to another person. They love to have their own space. This includes their home, car, time alone, not needing to report to anyone, no relationship obligations, etc.

However, this type of single can be divided into two different related subcategories that are a consequence of this need for independence:

4. People who are single because they’re faithful to their ideologies

Some people defend certain ideologies, and this keeps them single. This has a lot to do with the vision they have of the world and relationships in general. All of this conditions their relationships.

For example, religion is a very strong ideology. At times, it can invite people to stay single until they find the right match. This is often a rather difficult quest, since their partner should ideally share the same vision they have about relationships.

In the case of differences, they’ll suffer pressure from their ideology and from what they really desire or want. Anxiety, worry, and stress will undoubtedly surface in people who are single for these reasons.

There is one final type of single: pessimistic singles who consider the world of relationships to be dark and murky. This doesn’t mean that they don’t enjoy being in a relationship. However, they often don’t believe that a relationship can provide them with anything.

The often believe that all the pleasure they feel and all of its benefits are mere beliefs. However, seen from a distance, relationships are “nonsense.”

Pessimistic singles can also be the ones who believe that they will never find a person who truly compliments them. While these people are colder, they also live with a terrible weight and a feeling that there is no hope for them when it comes to relationships.

Overall, we want to emphasize that our experiences, beliefs and world view influence our relationships a lot. Of course, being single isn’t a bad thing, as long as it doesn’t mean that it’s because of a lack of self-esteem.

Being single is a completely valid choice. What’s more, many people should learn to be single to avoid having to depend on others. That way, you learn to spend time with yourself, know yourself and depend on yourself.

Are there any other types of singles you can think of? If so, share it with us!

Link copied!
Interesting Articles
Wellness
Whoever Upsets You Controls You

"Whoever upsets you, controls you”...Think about it, isn’t it true? When something has not happened the way we wanted it to or…

Wellness
Learn to Say Thank You

Even in my worst moments I feel like I should be thankful.  And no, it's not an externally imposed obligation, it's a duty that I give myself: my emotional wellbeing passes through…

Wellness
My Body Doesn't Belong in a Magazine, But That Doesn't Define Me

My body has never met a scalpel. My stature and my weight don't define me. My life does not revolve around…

Wellness
When Selfishness Is A Good Thing

You might think I made a mistake in the title of this article. Shouldn't it be a question? But I…