You may have never heard of Aeschylus, but he was one of the great Greek tragedy writers. In this article, we'll look at Aeschylus' great sayings. 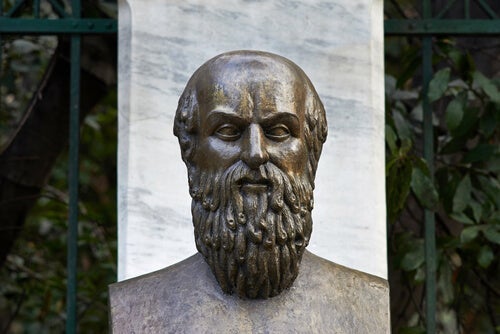 Aeschylus’ great sayings lead us to a tragic world in which fate always seems to find a way of trapping you. Recognized as one of the great Greek tragedians, along with Sophocles and Euripides, Aeschylus’ vision of fictional life is marked by moira and hybris.

You may recall that moira means eternal fate. It states that fate will always reach us, since nature is what governs everything, even the power of the gods. So, no matter how much pride we show (hybris), nothing can be done to escape our destiny, for we all receive our due punishment.

That being said, we’re going to focus on Aeschylus’ great sayings, that show us a way of looking at the world, that, even 2500 years after his death, we can still consider relevant.

Aeschylus lived between 525 BC. and 456 B.C., right in the middle of the era of Greek grandeur. His brilliance is fed by knowledge, but also by success on the battlefields, such as the victory in Salamis or Marathon against the Persians.

He had several standout works, such as the Oresteia Trilogy, Prometheus Bound, and Seven Against Thebes, which highlights the tension between classical belief and the new, more rationalist, democratic Greek movements

Here’s a selection of some of Aeschylus’ best sayings:

“In war, truth is the first casualty.”

For Aeschylus, truth always perished during wartime. His opinion was that people’s selfish interests always come first and people always lie and manipulate the truth in order to win the final victory, even though thousands have to die for them to achieve it.

This quote is so simple that it almost scares you. Aeschylus shows the importance of family relationships and how these ties have always meant commitment.

In ancient Greece, it wasn’t unusual for a father to have children who would receive their inheritance out of wedlock. Undoubtedly, this way of thinking was quite advanced for the time, as relatives didn’t always acknowledge their social commitments for these types of relationships.

“It’s a great happiness to see our children around us, but from this good fortune the greatest bitterness of man is born.”

Undoubtedly, studying family relationships in ancient Greece would require extensive research. However, this saying is very meaningful, both for those times and for now.

In most cases, a child being born causes a lot of joy. However, sometimes bitterness isn’t far away. They may get sick, cause arguments, have problems… In short, they could end up being a source of perennial concern, because parents always have to bear the bitterness of the bad things that happen to them.

“He that only hears half the story isn’t really listening.”

This saying is wonderful and perfect for the times we live in. In a trial, both parties’ sides of the story are heard. In politics, we have to understand all the speakers’ points of view. This applies to all facets of life.

Interestingly, some people often only want to hear one side of the story. We read the newspaper that says the things we want to hear, we listen to the radio station that interests us, we watch the television channel that agrees with our way of thinking, and we interact with people with similar ideologies.

However, we shouldn’t need Aeschylus’ sayings to remind us of that reality. It should be obvious that, if we’re missing part of the truth, we’re missing the entire truth.

“The force of necessity is irresistible.”

There are few authors who affirm as strongly as Aeschylus that you just can’t stop someone who’s moved by necessity. It’s perfectly natural because when we’re hungry, we need to eat, just like when we’re thirsty, water seems to taste better than ever.

Nothing can stop necessity. People who need something and search for it don’t stop until they find it because, for them, it’s a basic necessity. Ideologies and philosophies don’t mean a thing if you’ve nothing to eat. Less important needs don’t concern us as much in comparison, and it doesn’t bother us as much when we don’t satisfy them.

“Whatever will be, will be.”

Although many of Aeschylus’ sayings deserve to be here, we don’t have room for more. Thus, we wanted to finish our article with a saying that’s still used a lot today.

Aeschylus, like so many Greeks, was fully convinced of the unchangeable nature of some elements of our future. Whatever we do, whatever has to happen, will happen. No one escapes what has been written for them: first birth and then death.

10 Great Samurai Sayings
These Samurai sayings speak to one of the most important cultures and philosophies of all time. What's more, the thing that made these warriors truly special was not their skill in battle. It was the principles and values that inspired them. Read more »
Link copied!
Interesting Articles
Literature and Psychology
The Best Quotes from the Most-Read Books in History