Dharma, a Path Toward Truth and a Meaningful Life

Those who act rightfully, those who obey, understand, and practice Dharma, get the benefits of the cosmic ordering. It brings them happiness, mystical ecstasy, which gives them a sense of well-being and fulfillment. 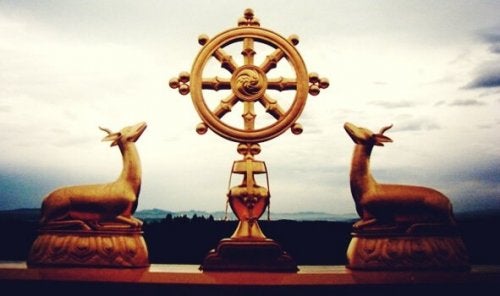 Few words have such a wide and complex semantic field as the word Dharma. However, all its meanings come together to guide you in the direction of truthful, meaningful, and just things. These things that somehow push you to always do the right thing according to nature’s law and fate.

It’s been a long time since the world started to experience a new awakening in the spiritual field. However, it comes in different hues due to the new age blurring and twisting a few concepts. In the effort to adopt all of Dharma’s philosophical world, some ideas got lost in the way.

An example of this is thinking that Dharma is the positive version of Karma, as if both concepts were opposites. Another misconception is the assumption that Dharma refers to a religious proclamation one must follow to raise their spirituality to another level.

But it’s none of that. Dharma describes the natural and innate behavior of things, and of each one of the aspects that are part of the universe, including yourself.

Dharma is when you do what you like and you’re happy because of it, when you do any task passionately without expecting anything in return, when you’re unaware of time, when whatever you’re doing affects others in a positive way.

You can say that such basic definition replicates the term flow, adopted by Mihaly Csikszentmihalyi in the ’90s. Similarly, both concepts share the same idea: building a meaningful life.

So, an element that pursues this goal above everything else, leads you to adopt the principles of a peaceful life, which you should work on every day. These principles are:

When the British colonized India and tried to understand the country’s traditions, they had trouble understanding what exactly Dharma was. Their biggest mistake was believing that it was a religion. They ignored the fact that religion can only apply to humans, whereas Dharma designates the truth, what already is, and what exists.

It’s each plant’s essence, each star’s purpose, each light, each electron, each grain of sand on a beach… We all have an inner truth, a path in life, a nature of our own.

“Dharma, or Ethics and Morals, are the fundamental set of rules created for those who want to play a game, by those who are inside the game.”

A life of meaning, existence, and purpose

In Dharma traditions, a person that doesn’t act correctly, that harms others or tries to appear assomething they’re not, attracts what’s called a-dharma. It’s a state with no peace, a strike against nature, a break up with fate’s laws.

This is what Rigveda (or Ṛgveda) reveals. This is the most ancient Indian text written in Sanskrit. It gathers a variety of anthems where the definition of Dharma is better explained.

On the other hand, those who act rightfully, those who obey, understand, and practice Dharma, get the benefits of the cosmic ordering. It brings them happiness, mystical ecstasy, which gives them a sense of well-being and fulfillment.

Also, in those ancient writings, Buddha exposes his teachings with the goal of helping the reader achieve an inner balance that helps Dharma transcend.

Connecting with it and accepting it as your lifestyle will free your mind in order to reach enlightenment: the truth that lies inside of you.

Dharma’s wheel, or dharmachakra, is without a doubt, the oldest symbol that Eastern philosophies use, such as Buddhism, Hinduism, and Jainism. Its movements go to the rhythm of your own personal conditions, needs, and karmic characteristics.

Learning to listen to Dharma’s voice isn’t something necessarily easy to many people. Always keep in mind that finding your truth and knowing your true purpose in life can take you a lifetime.

Let’s talk about happiness. Do you feel heavily burdened today? Maybe your finances aren’t so good, you’re not living in…

Ryan Murphy and Brad Falchuk, creators of the anthology series American Horror Story (AHS), already have nine seasons under their belts. The most recent, Apocalypse, was highly anticipated because of the novel…

Literature and Psychology
Emotionary: A Wonderful Book About Emotional Education