Is Degrowth the Solution for the Modern World?

Degrowth proposes decreasing the frenetic rhythm of modern capitalism and changing the production system so it can be more respectful to the environment and to collective happiness. 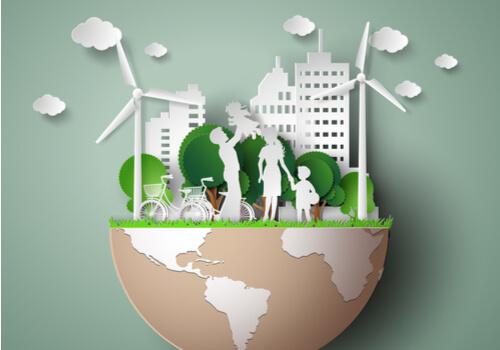 The degrowth movement is based on the ecological economic theory developed by Nicholas Georgescu-Roegen, a brilliant Romanian mathematician and economist. Its basic idea is to progressively reduce production to restore the balance between humans and the natural world. This would lead to a more sustainable social dynamic.

Growth is perhaps the number one goal of all economies in the modern world. It’s a mantra of capitalism. The idea is increasing production and consumption. However, unfettered growth has undesired consequences. The first is a systematic attack on nature and the natural processes. The second is a notable decrease in the quality of life of humans and other living things.

According to the degrowth movement, human beings should work less and have more free time. That should be the foundation of a new model in which production is regulated in a way that would satisfy our needs without destroying the environment or turning humans into robots.

“The main purpose of downscaling as a slogan is to mark clearly the abandonment of the insane objective of growth for growth’s sake, which is driven only by unbridled search for profit for the holders of capital.”

These days, most of us spend most of our time working. In the past, people worked to meet their basic needs. That isn’t true anymore. Over time, humans have developed new needs which are all associated with consumption.

For many people, a “good” job is one that allows you to increase your purchasing power. We want to have more so we can buy more. It doesn’t matter if what we buy is relevant or useful or not. A few decades ago, people only needed one kind of soap to clean themselves. Now, we “need” five or more! There’s hand soap, shower gel, shampoo, conditioner, etc.

Purchasing power has also markedly increased in many societies. However, that doesn’t mean that people are happier or more fulfilled. In a study carried out in Canada, researchers asked a group of volunteers if they thought they were happier than their parents. Only 44% of the group answered yes, in spite of the fact that purchasing power had increased by 60%.

The foundation of degrowth

The world has reached a point where the imbalance between production and nature has become dangerous. We have doubts about the availability of certain resources for future generations. It seems that we’re doing something wrong. Degrowth believes that the problem is unbridled production. Consequently, the degrowth movement proposes eight solutions for the modern world:

New paradigms for a new era

In conclusion, it’s obvious that our current economic system isn’t making us happy. On the contrary, it’s causing neurosis, alienation, and inequality. New paradigms, like degrowth, are taking hold in the world and propose a kinder and more human direction.

Minimalist Lifestyle: How to Live More with Less
While some people enjoy the newest and best products, others are betting on a minimalist lifestyle. People are realizing that they don't need a lot. Read more »
Link copied!
Interesting Articles
Personality Psychology
Curious People Are Powerful People

Psychology
Humor Makes Us Happy and Happiness is Contagious

Humor and laughter takes the edge off in intense situations. But, in a lot of situations it's not seen as okay…

The feeling that everything is out of control, constant tension, nervousness, excessive worrying, agitation, insomnia, twitching eyelids, difficulty concentrating... All…

Psychology
We are All Made Up of Light and Shadows

Light and shadows are our constant companions, filling our inner being. They are part of who we are and what…