Definition and Characteristics of Cognitive Rigidity

Cognitive rigidity can lead to a clearly unhappy life. Not admitting other perspectives and refusing to change, value other points of view, and making use of a more open mind only leads to frustration. 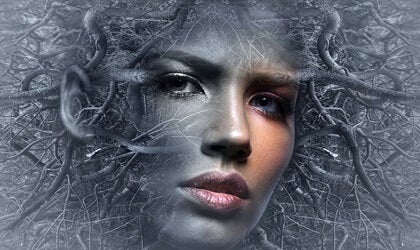 Cognitive rigidity is a characteristic of people who are captive to their own behavioral patterns. They’re those who don’t accept new perspectives. In fact, these people don’t tolerate changes at all. This is probably because they don’t understand that mental flexibility is essential for a healthy life. That is, that one must build healthy interpersonal relationships in order to face adversity.

You’re probably thinking of someone who checks these boxes. However, everyone exercises cognitive rigidity sometimes. For example, it’s common to think that you can only solve certain things your way. Also, some people are convinced that their values and beliefs are universal truths.

Each person clings to a series of concepts they believe are solid. Yes, some give in to other areas and are open to other opinions and perspectives with ease. Doing so is positive as long as there’s a balance and a tendency towards open-mindedness.

Similarly, those who don’t yield and are prisoners of their same old mental schemes will clearly be uncomfortable. Thus, you must take into account that this characteristic often goes beyond a personality style and could be due to certain disorders. For instance, it could be the result of certain types of dementia, autism spectrum disorder, or obsessive-compulsive disorder.

“The strength of a belief depends on the stories woven around it. Once you have woven enough stories around your belief, even God can’t get you out of it.”

The concept of cognitive rigidity is key to acceptance and commitment therapy. It’s essential for a person to detect these mental inflections. Especially in this type of therapeutic approach framed in what’s known as third-generation therapies (those focused on educating and reorienting a patient’s life from a more holistic standpoint).

Thus, a great part of people’s suffering is due to their own unyielding beliefs. Also, it’s due to those values and schemes people hold on to without even questioning them. They’re the backbone of most people’s lives, in a reality that lacks variety, openness to change, and opportunity.

Therefore, cognitive rigidity is a problem to detect and a bridge to overcome in therapy. Note that this concept is as old as Sigmund Freud’s psychoanalysis. For him, the patient’s resistance to change, the point where certain attitudes emerged, made progress so difficult. This is because they only revealed the surface of a problem.

They don’t connect with the present, are uncomfortable with it, and fear it

People characterized by psychological rigidity don’t appreciate the present. They live in their own little world and close every window. They don’t admit novelty. Also, these people don’t appreciate an opportunity, don’t tolerate variations, and avoid the unknown and anything unexpected.

Any dynamic capable of breaking their stability scares them.

All paths are clear when someone understands their priorities. This is because people who know what’s important to them aren’t afraid to take risks, generate change, and open up to new perspectives. Some which may allow them to grow and look after what they value.

However, a person with cognitive rigidity is limited to following fixed rules – their own. In fact, they’re unable to look beyond their comfort zone and what worries them most is having absolute control over their reality. For example, it makes them incapable of giving in, attending to other people’s needs, being tolerant, and connecting with people by understanding their points of views.

Their relationships progressively lose quality and frustration arises. Then, they begin to let go of many of the things that were important to them. Mainly because they don’t know how to appreciate them.

These people just can’t tolerate the unexpected, let alone uncertainty. Thus, something they must understand is that this world is governed precisely by unpredictability. Knowing how to adapt to changes and being able to react in a creative, original, and flexible way allows people to avoid the changes typical of a daily routine.

Also, a person with cognitive rigidity has cognitive closure. This is the need to eliminate any uncertainty or ambiguity that arises in any situation ASAP. They’re those who have the same, and often most extreme, answer to every problem.

They’re also those who, in the face of an argument or disagreement, adopt the least useful or constructive behavior. For instance, they might simply avoid speaking to those who disagree with them.

Are you wondering how to let go of your cognitive rigidity? Well, the aforementioned cognitive-behavioral and commitment therapies are quite useful.

Finally, as a study by Jonathan Greenberg from the Ben-Gurion University of the Negev, Israel, revealed that practices such as mindfulness are good options. They’ll help you train for and adopt a more flexible mental approach.

Mental Rigidity
The word "close-minded" has been used in popular language for a long time. We use it to describe people who display mental rigidity, or people who don't Read more »
Link copied!
Interesting Articles
Basic Psychological Processes
The Meaning of Subjective Memory Complaints

People tend to worry more and more about cognitive functions as they get older. There's a particular concern for future…

Paradise syndrome refers to how each person has a vision about how things are and, most importantly, about how they…

Marcelo Ceberio is one of the most outstanding figures in psychology. He's written numerous works, scientific articles, and more than…