Would you give shared custody to an abusive parent? Custody, an acclaimed French film, shows a family's custody battle through the eyes of the legal system. 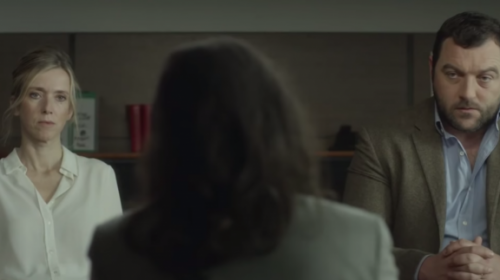 In February, Custody (Jusqu’à la garde), the drama about violence against women from first-time filmmaker Xavier Legrand, won Best Film at the 44th edition of the César Awards in France. This was no surprise, as the film masterfully portrayed a very serious issue.

In the opening scene, you see a room where a couple is working out custody details. Although it may seem an innocuous beginning, Legrand pulls you in from the very first moment and doesn’t let you go until the end.

Custody shows that monsters do exist and that they’re living among us. They aren’t in dark corners nor the closet. Monsters are living among families.

Sharing Custody with a Monster

The story is told from the point of view of a judge who’s overseeing a divorce and custody case. It’s not easy to fully understand what’s going on in the case. However, some of the more prominent elements seem obvious, like the father’s violent behavior towards the mother. Nothing seems very clear in this case, which makes the judge hesitate.

Miriam’s lawyer states that Miriam’s husband is possessive and violent. Antoine’s lawyer, on the other hand, denies her allegations and argues that it’s abnormal for Miriam (played by Léa Drucker) to want to keep Antoine from showing love towards his children.

The testimony of a child begging not to have to spend time with his father echoes in the room. Meanwhile, the judge looks at both parents, trying to detect any sign or gesture that’ll help her make her decision.

The mother’s lawyer has a hard time finding clear evidence of the father’s true character. One thing that abusers are very good at is changing their behavior to adapt to any given situation.

You can sense impending disaster as soon as the judge issues an order for shared custody. What happens after is an explosion of violence, repression, and unease, masterfully portrayed by Thomas Gioria, who plays the youngest son, Julien.

From the moment that the father (played by Denis Ménochet) gains custody, tension runs high. In one scene, you see a close-up of a child’s terrified face. In another, a wordless dialogue that makes it hard to breathe.

Julien’s face and expressions narrate what he’s living and feeling. The film has no soundtrack, so the sounds of daily life turn into threats. This is a representation of how even a noise of a key fitting into a lock may trigger fear in many abused women.

The viewer quickly realizes that this isn’t a case of “parental alienation”, a diagnostic label with a questionable scientific basis. The perverted narcissist Antoine sometimes seems misunderstood. In fact, it almost seems like he’s being victimized simply for loving his family.

No one in the family believes Antoine’s act. They know that his attempts at reconciliation don’t come from a place of remorse. They understand that he’s just trying to regain control of the situation. This film’s power lies in Legrand’s excellent direction. The film’s mix of fear and slightly perverted hope will have you on the edge of your seat.

You can sense that an intense culminating scene is coming as the father’s tension and frustration builds. Antoine isn’t getting what he wants out of the shared custody agreement. His real goal wasn’t to spend time with his children but to gain access to his terrified ex-wife, who lies and hides to avoid his aggression.

The strategy to get close to his wife by intimidating his youngest son isn’t working. His frustration grows, and his anger is palpable. You can sense that a violent explosion is coming.

That’s when you start to hear the doorbell, a constant and terrifying sound. It takes you back to the cold room where the custody decision was made. You don’t know what’s about to happen, but you can sense that it’ll be awful.

The story’s plot hurtles towards disaster. The mother clings to hope that the doorbell will stop ringing. She knows who’s there, and she knows he’ll ring for a long time. She hopes that he’ll just leave eventually.

The ringing stops, but the characters start to hear other noises. This time, Antoine isn’t going to stop. The last scene in the movie is terrifying. There’s no need for special effects or makeup. Antoine doesn’t seem human anymore. He’s a monster blinded by pride and revenge.

The scene is so real that your empathize with this mother and son. You’re the neighbor who calls for help, the police officer who takes the call and tries to do their best.

Monsters do exist among us. They might even share your last name, which is the hardest thing of all.

You can’t fight them with cognitive behavioral therapy. You fight monsters with education, empathy, solidarity, justice, and intervention. We’re all responsible for making sure that our communities take action against these monsters. Educate yourself so that the chilling story of Custody no longer reflects real life.

The Experience of Children With Divorced Parents
Many parents think that only they are directly affected by their separation. However, this isn't true when there are children involved. Read more »
Link copied!
Interesting Articles
Family
My Grandma with Alzheimer's Had a Lot of Fun

Are you having a bad day? Is everything is wrong at this moment and full of nonsense? Could you use…