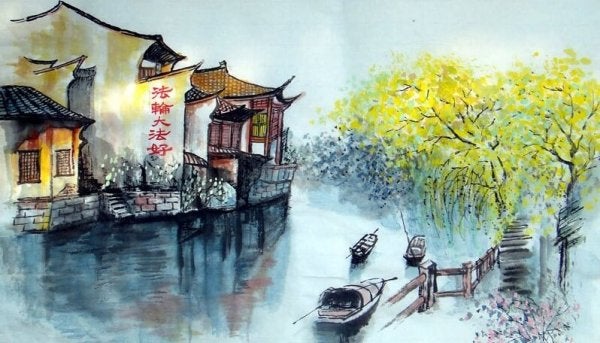 As the ancient Zen story goes, there was a master who was responsible for the education of his two young disciples. They were both very good students, selfless and disciplined. They both wanted to develop and become Zen masters themselves. Each day, they did everything they could to achieve this.

Above all, the master tried to instill in them the idea of detachment. In Zen philosophy, attachment is the primary source of suffering. Detachment, living, and letting others live are this philosophy’s main goals. The path to detachment is the path towards peace and that is an essential component of happiness.

“The law of talent, like that of true happiness, is disinterest.” [translation]

The Zen story tells us that the two young students tried in every way they could to depend less and less on people and things. They ate only what was necessary. They even fasted on certain days and they did it happily. Their clothing was simple. Their rooms and beds were modest. None of this seemed to them like a sacrifice because they were trying to better themselves.

A walk to the river that changes everything

One day, the master asked his two disciples to accompany him to a nearby village. They were going to take food to the village, as this village was very poor. The story goes that both students accepted his invitation with great enthusiasm. In fact, they offered to carry very heavy baskets on the way there. When they arrived at the village, they humbly gave away the food. They were happy to be of service to others.

When the time came to return home, the Zen master asked them to take a walk through a forest close to the monastery. It was early and all three took in the beauty of the flowers, the sky, and the animals. What’s more, there was a river close by. What could bring more happiness to them than drinking from its crystal clear waters?

They walked together for a long time in complete silence. They enjoyed the feeling of the sun and the wind on their faces. They smelled the plants and listened to the birds chirping. After a little while, they came to a river. They couldn’t have imagined what they would find there: a beautiful woman smiling at them.

The two young monks were struck by the strange woman’s beauty. She was the most beautiful woman that either of them had ever seen. They both got very nervous and started to walk. Slowly at first, and then faster. They tripped and stumbled. They completely forgot what they were doing and only had eyes for her.

When she saw how flustered they were, the woman smiled at them flirtatiously. Later, with a seductive voice, she asked them to help her cross the river. One of the young men rushed to help her. He took her in his arms as the woman looked at him suggestively. The young monk smiled. Then he crossed the river and set her on the bank on the other side. He returned to where he had left his master and the other monk.

The master looked carefully at his young disciple and then they continued on their way. The other monk was waiting, curious to see what would happen. He looked at the master and looked at his companion. Then he pressed his lips together, but he didn’t say anything. They arrived at the monastery in silence.

Days passed and the monk still waited. He didn’t understand why the master hadn’t said anything about his companion’s inappropriate behavior. How was it possible that the other monk gave in to the woman’s charms and helped her right in front of his master? Just thinking about it made him angry.

The other monk was calm. He went on with his regular routine and didn’t even notice his fellow disciple’s anger. His relationship with his master was the same as before. Neither of them ever mentioned what happened with the beautiful woman. His companion’s anger started to fester. One day, he decided he couldn’t take it anymore and complained to his master.

“How is it possible that you said nothing to him even though he left you standing at the edge of the river to go and flirt with that strange woman? Aren’t you going to say anything to him? Why don’t you scold him for his selfishness and lack of consideration? Why don’t you punish him for having given in to his lust?” said the monk to his master.

The master sat looking at his student in silence for some time. Then he said something that the monk would never forget: “Your companion picked up the woman, helped her cross the river, and left her there. In contrast, you haven’t been able to detach yourself from any of it. Not from him, nor from her, nor from the river.”

29 Zen Phrases to Inspire You
Zen philosophy originates from the beginning of the first century, when Chinese thought came into contact with the basic principles of Hinduism, Read more »
Link copied!
Interesting Articles
Culture
3 Quick, Original Exercises to Stop Worrying

Fear and worry are two things that will keep you from your destiny if you let them. So don't give them…

Culture
Repressing Emotions Is a Risk Factor for Liver Disease

The most consensual thinking in recent years has insisted in the use of reason above every emotion. Thus, we have…

Research
Neuralink, a Brain Chip to Connect to a Computer