Why Should Children Play Sports?

When children play sports, they learn about self-control, discipline, and teamwork, among other things. Read more about this here! 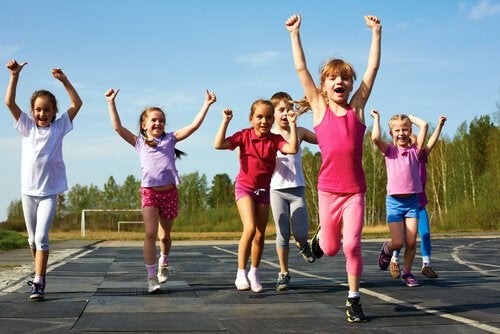 It’s great to see children playing and having fun. For them, their play time is the only important thing in the world. It’s also great for them to play sports since it helps them strengthen their muscles and lungs.

Some children who play sports often have trainers or coaches. If they do, the whole thing changes. It’s not just about having fun anymore. Scoring goals or points becomes more serious.

Sports offer children unique development opportunities. And they don’t have to become future “sports stars” to benefit from playing sports.

Committing to something and respecting that commitment

Organized sports give children a good dose of discipline. They have to change their clothes, warm up, prepare themselves mentally, compete, and manage victories or defeats. Additionally, there might be certain times during the week when they need to practice for a game. When they play sports, there’s a commitment they need to respect.

Some days, the child will enjoy playing the sport more than others. However, since they’re part of a team and a core component of it, they have to contribute every time they’re called upon. Thus, sports help children learn to organize their lives. They also train them to activate their willpower when they need it most.

Even from an early age, children have to perform as well as they can when they practice a sport. Children often come to realize that they can bring about their own defeats. For example, like when, at the beginning of a game, they can’t meet their high expectations and lose hope. Thus, sports will help them learn to regulate their expectations and only raise them when they can give their best performance.

Also, sports give children the opportunity to learn to manage defeats and dust themselves off for the next game. A child might even be able to reflect and understand how others’ expectations affect their choices and performance.

In addition, sports allow children to learn to manage frustration and self-directed anger. This is where we, as parents, have a special opportunity to intervene and teach our children to have a constructive internal dialogue. We should teach them that they shouldn’t beat themselves up. The best thing we can do is help them and guide them when they’re still little. Our words will have more of an impact before adolescence sets in and their peers start influencing them more.

When children play sports, they sharpen their senses

Sports have many similarities with real life. For example, on the field, there are people who play on your side and support you, just like in real life. In team sports, children learn that, for better or for worse, they’re not alone. They realize that they share interests with a group of people (winning or getting a good score). Furthermore, they learn that they’ll have better results if they learn to trust their teammates and support them.

They learn that they can turn a project that’s not starting out too well around with effort and intelligence. A goal against them or a bad start don’t necessarily mean they’re going to lose. Such setbacks just mean that it’ll be a little more difficult to win, but not that winning is impossible. They also learn that there are certain things other people can’t do for them, such as organizing their game strategy or moving their legs quickly.

But perhaps the most important parallel is that when children play sports, they learn to take advantage of opportunities. They learn that, even though they can overcome a bad start with extra effort, a good start or intercepting the ball before the opponent gets it can give them a huge advantage.

Sports are excellent ways for children to improve their ability to pay attention for a sustained amount of time. This is especially good for them because their prefrontal cortex is still in development. That’s the part of the brain that’s in charge of organizing behavior and making decisions.

Although playing a sport has many benefits, children should never stop having fun and enjoying themselves. Perhaps the best thing about sports in childhood is that they help children make their first friendships. Sports fields prove to be one of the most common settings for happy childhood stories.

Why Should Non-Athletes Care about Sports Psychology?
it takes a lot of work to incorporate sports psychology into your daily life. But it's helpful if you want to do your best, whether you're a pro or a weekend warrior. Read more »
Link copied!
Interesting Articles
Sports Psychology
Sport and Women: A Glass Ceiling More Evident than Ever