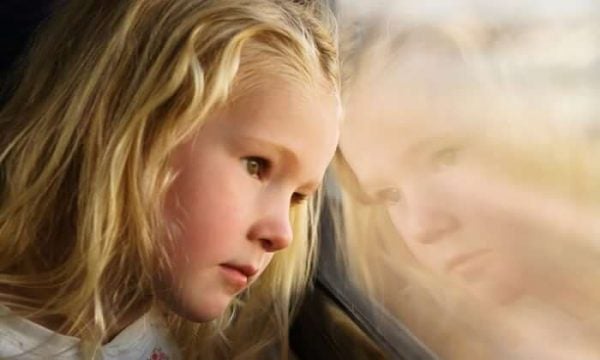 Human beings are, to a large extent, the product of their environment. The people who take care of us during our first years of life play a decisive role in what we’ll become. Hence, the children of depressed mothers have certain traits that distinguish them from other children.

Some studies have revealed that the brains of children whose mothers are suffering from mental disorders are different. The amygdala is bigger, even though we still don’t know what’s the neurophysiological reason for this. We also don’t know its far-reaching consequences. It’s a condition that appears in emotionally-deprived children. Depressed mothers can even cause physical changes in their children.

“Depression is a prison where you are both the suffering prisoner and the cruel jailer.”

Depressed mothers and their environment

Although it’s not so common, some mothers may suffer from depression after giving birth. It’s called postpartum depression. It’s attributed in part to the hormonal changes associated with motherhood. However, it’s also related to the kind of relationship every mother had with her parents since birth.

Normally, postpartum depression disappears in a relatively short period of time. However, when there are other associated problems, sadness worsens. Thus, the phenomenon of depressed mothers emerges as a result of the rearing process. Other mothers were already depressed before pregnancy, and this condition intensifies after birth.

Of course, maternal depression doesn’t only happen during pregnancy. This condition may appear at any time. However, the most defining effect on the child’s well-being takes place during critical periods, such as the first years of life or adolescence.

The role of a child in depression

In some cases, depressed mothers want to comfort their children. This means that they undertake a role within their problems: being a source of comfort for their sadness. The children become an oasis of well-being in the midst of this darkness.

It’s likely that this, in fact, is beneficial for the depressed mother. However, there can be negative consequences for the child in the long run. Unconsciously,  the child learns to play a role that doesn’t suit them, learning to “be there for their mother” and not “for themselves.” In other words, they internalize their caretaker’s needs and reject their individualization process.

On other occasions, depressed mothers don’t see their child as a source of comfort, but as a burden. This takes place mostly in unwanted pregnancies. These women may try to limit their presence in their children’s lives, as well as limit their expressions of affection. Ignore the baby. Ignore their needs. This creates a feeling of alienation in the child.

Depressed mothers can also greatly impact adolescence. It’s common for adult depression to compete with that of the child, and this results in mutual blames. The results of this interaction can become unpredictable.

Some teens turn their relationship with their depressed mother into a battlefield. There’s no place for a truce. Usually, this causes pain in both of them. These situations end up creating unmanageable and insurmountable distances.

Some children, due to insecurity or excessive dependence, end up accepting being blamed by their depressed mother. Therefore, they’ve decided to repair that unfathomable pain they experienced in her. Thus, dependence becomes symbiotic and maintains itself over time. The umbilical cord remains in place, even until death.

A depressed mother may not be psychologically available to care for her child’s needs. They may need to treat their depression professionally. Otherwise, not only will it be more difficult for them to enjoy motherhood, but they also run the risk of causing long-term harm.

The Paradox of Happiness: What is it and How does it Work?
We all want happiness, but can we define it? Few people can, or come up with a plan to achieve it. This is the paradox of happiness. Read more »
Link copied!
Interesting Articles
Psychology
What's Behind Demotivation?

Today's quotes are for Highly Sensitive People (HSP) and just may give you more self-awareness and self-confidence, plus better emotional…

Psychology
You Weren’t There When I Needed You the Most

You weren’t there when I needed you the most. That destroyed me and plunged me into a profound sadness. When…