Cesare Lombroso and His Theory of Criminology

Cesare Lombroso is considered the father of criminology. His criminal classifications were relevant for a long time. Learn more about him in this article! 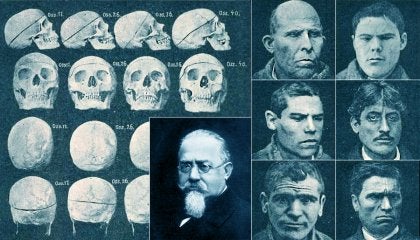 Cesare Lombroso is extremely important in the history of criminology. His theory on the classification of criminals was the main tool people used to profile them for a long time. Some of his ideas are actually still being discussed.

Cesare Lombroso was a doctor and anthropologist. Some people consider him to be the father of criminology. His book Criminal Man, According to the Classification of Cesare Lombroso is considered the first systematic list of criminal profiles. Alongside Enrico Ferri and Raffaele Garofalo, he was a major proponent of positivist criminology.

“There are certain clues at a crime scene which by their very nature do not lend themselves to being collected or examined. How’s one collect love, rage, hatred, fear…? These are things that we’re trained to look for.”

Lombroso was heavily influenced by Darwin’s theories of evolution. He even theorized that criminals were the “missing link” between primates and modern man.

His theory on criminals and how to classify them is still his most well-known. He said there were “born criminals,” “criminaloids” (occasional criminals), moral imbeciles, criminals by passion, and criminal epileptics.

Cesare Lombroso and his criminal classifications

Lombroso believed that you could tell if someone was a criminal by looking at their physical characteristics. To him, criminals were mentally and physically inferior in a way that was visible to the naked eye.

His physical classification of born criminals included a small skull, a large eye socket, a sunken forehead, a lump on the lower part of the back of the head, etc. Psychologically, he said they were insensitive, impulsive, and had no sense of guilt.

Cesare Lombroso’s theory states that you’d rarely see a moral imbecile in a psychiatric facility. You’d be more likely to see them in a prison or brothel. They’re unfriendly, vain, and selfish.

Like born criminals, they also have a prominent jaw. Their faces were also asymmetrical. But they’re identifiable through behavior, not appearance. They seem insane, even from early childhood.

Lombroso saw epilepsy as a sign of criminality. According to him, criminal epileptics are lazy, animal-loving, destructive, and vain. He also said that they had suicidal tendencies and that, along with moral imbeciles, they were the only ones who tried to commit crimes with other people.

Criminals by passion act on impulse and with noble ideas in mind. A crime of passion motivated by a non-noble impulse would just be a common crime.

According to Lombroso, these types of criminals don’t have any outstanding physical characteristics, although they usually ranged from ages 20 to 30.

To him, they’re also extremely affectionate and tend to feel extreme guilt after committing a crime. Many try to commit suicide. Lombroso believed there were three potential motivations for their crimes: grief, politics, and the murder of a child.

Cesare Lombroso’s criminal classification theory was the standard for a long time. Some serious issues became clear when people applied the scientific method to his theory. There were also times were it led to prejudice and to the idea of “eradicating” criminals.