Cells Light Up Before They Die, According to a Study

Science also knows the language of poetry when cells light up before they die. This beautiful phenomenon is comparable to how the supernovae radiate large amounts of light. 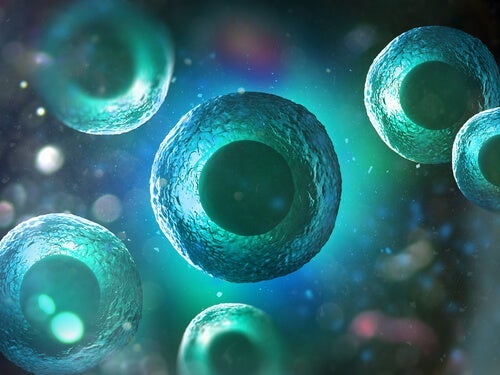 German scientist F. A. Popp and his colleagues discovered, over 30 years ago and almost by chance, that cells light up before they die.

This observation, as enigmatic as it is elegiac, took years to corroborate. Nevertheless, it offered a particular description of the properties of the human cell. A discovery that stimulated popular imagination as much as it clashed with the scientific skepticism of the time.

The concept of lit up cells has a rather passionate lyrical beauty.

According to the scientist, such a poetic phenomenon reflects the programmed tendency of human cells to emit ultra-weak luminous radiation (composed of biophotons) with exponentially greater intensity than usual. It happens during the moments prior to the cessation of their vital functions.

This isn’t only observable in the last moments of the cell’s existence. In fact, every living multicellular being can emit light. One that hypothetically plays an important role in intercellular communication, according to Popp. He was faithful to the work of A. Gurwitsch.

This type of communication is indispensable for the coordinated work of the various functions of the cell. Moreover, it articulates by virtue of a language of regularities and irregularities in the aforementioned light emissions.

“Every hidden cell is throbbing with music and life, every fiber thrilling like harp strings.”

The first conclusions regarding how cells light up before dying

The first conclusions the German scientist ventured to reach about these findings found a place in the field of health. His vision of the matter implied the suggestion that the amount and characteristics of these biophotonic irradiations show statistical correlation with the health status of the organism, in general. With the human body, in particular.

This concept articulated the controversial narrative vehemently defended by this man of science. He claimed that the more chaotic the emission of luminous units, the more it would allow identifying different human diseases. However, this peculiar perspective couldn’t be scientifically and irrefutably validated yet.

Such approaches to human health don’t have official support or accepted clinical application. However, what scientists have demonstrated is this bioluminescent cellular emission intervenes in processes of information transmission between cells somehow.

The scientist S. Mayburov is responsible for this scientific agreement between light and cell biology. He published his studies in the technology journal of the Massachusetts Institute of Technology (MIT).

How’s it possible for cells to light up

One obvious reality is that living cells receive sunlight and store it by collecting photons, their constituent units. Otherwise, the phenomenon of photosynthesis wouldn’t exist and plants wouldn’t obtain energy for their subsistence.

It seems logical to think that, according to the Einsteinian principle, the matter isn’t destroyed, only transformed. The appropriation of photons by the cell, for functioning and conserving its constituent parts, brings with it the reuse of luminous energy. Also, it brings the spontaneous loss of portions of that energy, as it happens in every thermodynamic system. Thus, it isn’t unreasonable to think of perfect normality surrounding a cell that glows.

In line with the above, the Nobel Prize winner A. Szent-Györgyi, a Hungarian physiologist of the 20th century, theorized that as essential as energy is for life on Earth, it isn’t only a currency of change in every cellular function and process. Also, it’s irrefutably necessary for the maintenance of the structure of the cells.

That energy, in its most primeval and pioneering variant, is precisely the energy born as luminous radiation from the sun.

The beauty of the cell surrendering its light before dying

Based on his knowledge of cells under stress, Popp proposed that this action of quickly and intensely discarding their luminescent content in the moments prior to death responded to a rebalancing mechanism of the cellular environment.

Thus, in an attempt to enrich its external environment and disseminate energetic components that may still be useful, the cell would explosively detach itself from its photonic charge before ceasing to exist.

According to Popp, the fact that cells emit light responds to a mechanism that allows rebalancing the cellular environment.

Molecular considerations aside, here’s a glimpse of a metaphor that reflects, almost specularly, the same explosion of those old overgrown stars known as supernovae. These emit an enormous amount of luminous eternal radiation that humans contemplate from observatories. It happens due to their collapsing gravitationally in the final instances of their existence as stars.

As you can see, a supernova explosion also serves to make the galactic environment richer. It gives it back the atoms that millions of years ago decided to attract each other to form a rising star. Those atoms are now free to become part of other new stars, just as the energy of the cell will be the energy of many others.

Perhaps both phenomena are the expression of the same law of the Universe that operates at different scales. It may be that the smallest thing is a reflection of the greatest thing and vice versa.

Thank you science, for speaking of poetry even though humans still know so little about reality, and despite the limitations of the scientific method.

Purkinje Neurons: The Enigmatic Cells of the Cerebellar Cortex
According to a group of researchers at Harvard University, Purkinje neurons could be linked to the onset of autism. Read on to find out more. Read more »
Link copied!
Interesting Articles
Curiosities
The Differences Between Rules and Regulations

Curiosities
The Psychology of Phishing: When Emails Are Dangerous