Carnage the Film: A Caricature of Everyday Life 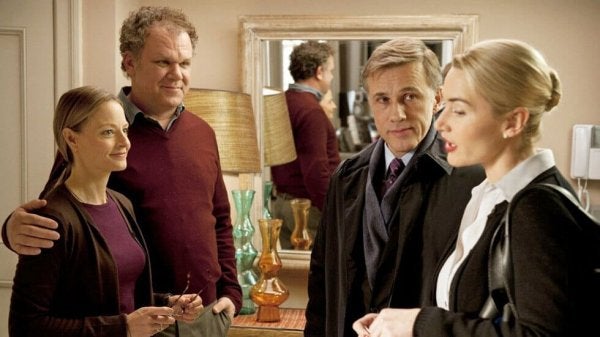 A film almost completely set in one room and with just four actors doesn’t sound very appealing. But Carnage surprisingly turns out to be a quite magnificent parody of everyday life. Roman Polanski’s film is an adaptation of the play Le Dieu du Carnage by Yasmina Reza.

There’s no doubt that the film has an exceptional cast. Kate Winslet, Jodie Foster, Christoph Waltz and John C. Reilly are the four actors. It is a short movie, static in terms of the spaces it uses, and limited in characters but with a very powerful script. The impact of the film lies in the acting and script.

“The origin of the law, as you know, is brute force”

Carnage: a conflict about children?

It all starts with an argument between two children in a park, the only outdoor scene. The argument ends when one hits the other with a stick. We then visit a home belonging to the Longstreets, the family of the child who was hit and whose mouth has been badly hurt as a result. The parents meet in the apartment to find a solution to the problem. The two families are:

As the film goes on, the masks come off and the characters go from politically correct to outwardly aggressive. Even Michael, who seems to be the peacemaker, will show a dark, spiteful side.

The conversation becomes real verbal carnage, and knives start to fly in all directions. What at the beginning was supposed to be the resolution of a conflict and an example for their children becomes a real mess. Each of them soon shows their true colors.

Reasoning and coherence disappear. They all become more aggressive. We’re about to see the worst of each character as they mock each other. This apparently serious situation will soon turn into an absurd — bordering on childish — argument.

Carnage explores the most primitive impulses of human beings. Our more intense, darker side comes to light in an ever more claustrophobic atmosphere. Every attempt Cowan makes to leave the apartment fails as they start argument after argument.

Arguments often go round and round and send us down a one-way street with no way out. Just when it seems that everything is going to be resolved, another argument will trap us and force us into the conflict again.

That’s how things go in the movie, as they are trapped between the four walls of a room and never seem to get anywhere. At one point in the film they are actually approaching the elevator to leave. It seems that the arguments have ended, but suddenly a new one starts and they end up in the living room again.

The battles grow until a war between two families ends up a fight of men against women. Then it becomes a completely individual war. Each one of them defends themselves, and human stubbornness rears its ugly head. Everyone thinks they’re right. They think that if everyone thought the same as them, the world would be a better place.

Carnage is quite a poignant parody of human nature. We see characters using all kinds of basic self-defense mechanisms, missing the point and stabbing each other in the back with words.

As they leave behind accepted social conventions and show their true character, we see the reality behind the mask. We see the hypocrisy and lack of morality in our world. Polanski gives us a pessimistic view of our daily life, since the characters are all too familiar. It’s easy to identify with any one of them.

The film criticizes the importance we give to money and status, especially through the character of Alan Cowan, who is more concerned about his work than his own relationships. He hardly shows any interest in his son.

We also see him as an immoral character when we discover that his job is to defend a pharmaceutical company whose medicine causes serious health problems. In addition to this, he lives glued to his cell phone, always working. It allows him to escape potential arguments, but the attitude will eventually contribute to conflict by preventing communication between the two families.

Penelope is set in contrast to Alan. She seems very focused on humanitarian causes and very aware of the problems of the third world. However, she believes everything she sees, and doesn’t see the real interests behind the aid that Sudan receives from the West.

This chaotic, meaningless situation ends up going nowhere. The really great part of the film is when the children teach their parents a lesson. It’s a brief scene, in the park where it all started and where the children later seem to leave their differences behind.

It makes us reflect and think that perhaps we are making things too complicated and that everything could really come down to a simple discussion and handshake between children.

Criticism, comedy and realism come together in a wonderful way in Carnage. It shows us an everyday situation but goes beyond fake smiles to reveal mankind to be nothing more than a caged animal that breaks out of the bars, a violent, selfish creature. Carnage is an artistic caricature of current society, a look at the breadth of human stupidity.

“I believe in the savage god. A god whose rules have not been questioned since time immemorial “

11 Inspiring Movies That Will Make You Want to Be a Better Person
Here are 11 movies that will inspire you to be a better person, movies based on true events or made up, but all of them real classics of inspirational film. Read more »
Link copied!
Interesting Articles
Cinema, Television, and Psychology
Three Billboards Outside Ebbing, Missouri: The Anger Within Pain