Hetero-Aggressive Behavior: What Is It and What Does it Look Like? 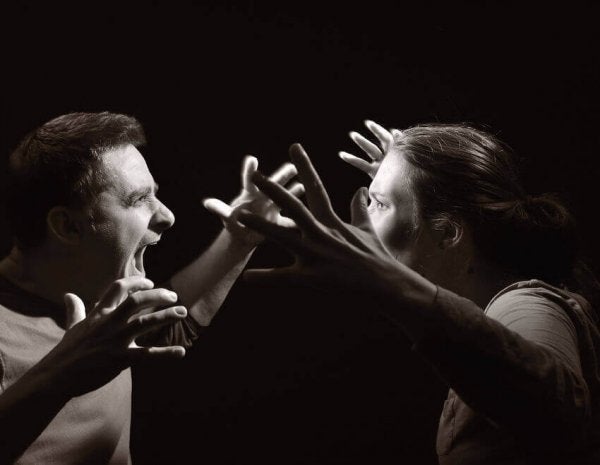 Maybe you’ve heard the Paulo Coelho quote that says: “fear generally manifests itself in two ways: through aggressivity or submission.” In the case of hetero-aggressive behavior, we are concerned with the former.

“In all societies and collectives there must be a channel, an exit door through which people can free their accumulated energies in the form of aggressivity.”

This is different from auto-aggressive behavior. That is the umbrella term for all behavior in which the victim and the aggressor are the same person.

In other words, this phenomenon encompasses a series of very diverse patterns in terms of intensity and typology. It includes aggressive gestures, physical fighting, verbal insults, etc.

We should add that studies say this aggressive behavior tends to be related to different disorders thought it isn’t necessarily part of them. It is associated with mental problems of distinct origin, from psychotic to emotional or organic problems.

What are the characteristics of hetero-aggressive behavior?

This phenomenon has unique characteristics. Let’s look at the most important ones:

What makes up hetero-aggressive behavior syndrome?

There are three syndromes that are especially characteristic of hetero-aggressive behavior. Disorders like schizophrenia, bipolarity, and depression can be related.

This means behavior other people find disturbing. They often show up in childhood in the form of behavioral disorder, negativity, or a defiant attitude. This is very common among children under 10 years old. Their behavior becomes disobedient, provocative, markedly hostile and very defiant. This behavior exceeds the limits of what we consider “normal.”

Individuals with behavioral disorder, which researchers also attribute to childhood, have a pattern of repeatedly violating other people’s basic rights. They consistently cross the boundaries of social norms.

Patients display a behavior known as intermittent explosive disorder. A total loss of control over aggressive impulses characterizes this behavior.

This effect causes a disproportionate aggressive reaction to whatever the trigger may be. It manifests itself through physical and verbal attacks. It might last a few seconds or minutes, but it usually goes away on its own as quickly as it came.

It also triggers motor hyperactivity along with mood swings, usually through fear, distress, and anxiety. In this case, the intensity varies from mild to intense and violent.

The consequences of hetero-aggressive behavior tend to vary significantly and have a diverse set of causes. They might be criminal behavior, a destructive attitude, unrealistic solutions to problems, anxiety, etc.

“Those who get caught up in an aggressive competition lose their minds and, more obviously, their strength. Someone who is sure of something doesn’t need to raise their voice or get worked up.”

As you can see, this phenomenon is associated with certain disorders that can be truly serious and dangerous. What’s more, they can result in violent behavior that can affect anyone.

Intermittent Explosive Disorder: When Frustration Turns Into Aggression
Some people feel a disproportionate amount of frustration in comparison to its trigger. They suffer from intermittent explosive disorder. Read more »
Link copied!
Interesting Articles
Psychology
Saying Sorry: Fundamental for every Family

Psychology
How to Identify Psychological Abuse

Identifying abuse is easy when the abuse is physical. But, what about psychological abuse? This kind isn't usually so obvious.…

Psychology
How Exercise and Stress are Connected