Carl Jung founded analytical psychology in an attempt to delve into the mystery of the unconscious and the dream symbols of the psyche. 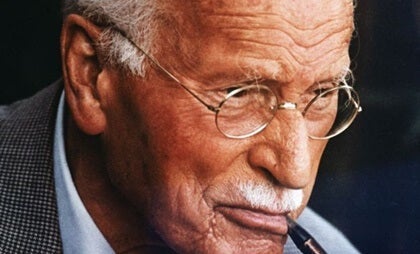 Carl Jung was one of the most prominent psychologists in history. His legacy is a fascinating sort of alchemy in which analytical psychology, the collective unconscious, spirituality, humanism, and mythology are all connected. For this pioneer of dream analysis, understanding the psyche meant, above else, unraveling the self: making the unconscious conscious.

When thinking about Jung, it’s common for concepts such as archetypes, synchronicity, or the above-mentioned collective unconscious to come to mind instantly. Yet one thing people often neglect about him and other remarkable figures of the 20th-century psychology is that they were, first of all, great thinkers.

Carl Jung was an outstanding figure in this regard. During the last days of his life, he made a series of reflections that are highly inspiring to this day. To him, psychology was a basic tool for human beings; it was the self-knowledge channel that helped understand the origin of one’s own shadows and the challenging fears that are limiting in life.

Human beings are capable of unleashing the most terrible wars and the most irrational conflicts. However, getting to know the psyche a little more, as well as the energy of the mind’s architecture, will let us live a more enlightened, respectable, and happy life, according to Jung. Because knowledge is a revelation and it’s freedom.

“Your visions will become clear only when you can look into your own heart. Who looks outside, dreams; who looks inside, awakes.”

Jung’s childhood: when one dream changes everything

Carl Gustav Jung was born on July 26, 1875, in Kesswil, Switzerland. His father was a protestant clergyman, and his mother, Emilie Preiswerk, spent long periods of time in institutional confinement due to various psychiatric disorders.

Jung had three siblings, but they passed away at an early age. In the midst of this instantly bleak scenario, young Carl didn’t take long to develop a solitary and observant character. He adored nature, history, philosophy, and withdrawing into his own inner world.

Something that was very clear to him from very early on is that he didn’t want to follow the same religious path his father and grandfather tried to lead him into. He had his own fate.

As he revealed years later in several interviews, his life changed as a result of a childhood dream. It was decisive to him: he dreamed that he’d fallen into a dark hole that led to the royal chamber of a palace with high ceilings and red carpets. In the center of the room was a dark, sinister, human-like tree. In the background, his mother’s voice was yelling at him to get away: the tree was the “man-eater”.

“I played alone, and in my own way. Unfortunately I cannot remember what I played; I recall only that I did not want to be disturbed.”

–A Life of Jung by Ronald Hayman-

From that dream, Carl Jung became aware that he needed to understand the mystery of dreams. He longed to delve into their messages, images, and symbols. Perhaps that’s why he initially thought of studying archeology. However, since his family was poor, he graduated in medicine at the University of Basel, in 1900.

Just when he was about to start working as a doctor’s assistant, a new opportunity came up. Only this time, it wasn’t in the form of a dream, but in the form of a book: a manual of psychiatry. In it, he found the origin of psychosis and personality disorders explained.

Jung thought of his mother and of his need to understand the psychological structure of human beings. So once more he felt a firm determination: becoming an alienist (bear in mind that at the time, this was the name given to psychologists who treated mental health issues). He put aside his future as a medical assistant and pursued a fairly new science with little prestige: psychiatry.

Fascination and disagreements with Sigmund Freud

Between 1900 and 1906, Carl Jung worked alongside Eugen Bleuler, a pioneering psychologist in understanding mental illness. It was at this time that he discovered how certain words elicited emotional responses in patients; something that, in his opinion, represented neither more nor less than subconscious associations, clues to each person’s own complexes.

Breaking ties with Freud’s personal and theoretical universe had consequences for Carl Jung. Most academic circles, such as the International Psychoanalytical Association closed the doors on him. However, and after suffering a nervous breakdown, he set out to develop his ideas, defend them, and establish his own personal approach: analytical psychology.

He argued that empirical evidence wasn’t the only way to arrive at psychological or scientific truths. For Jung, the soul also played a key role in understanding the psyche. Thus, the main contributions of his perspective are:

Gary Lachman pointed out in his biography of Jung that much of the academic community at the time saw him more like a mystic character rather than a scientist. He spent much of his life navigating between tangible and spiritual things, investigating primitive cultures, rites, cosmogony, and mythologies. He delved as much as possible into humanity’s psychic darkness where, according to him, all the answers lie.

Many of these revelations were reflected in The Red Book, a strange, cryptic, and fascinating work that was published years after his death. Despite these gnostic and spiritual currents, Carl Jung became honorary vice-president of the German Association for Psychotherapy and one of the most relevant psychologists of the 20th century.

Despite the fact that he didn’t start any psychology school, today, there’s the Jungian current, a therapeutic approach that applies his analytical methods to continue uncovering the mysteries of the unconscious and the deep psyche inhabited by the archetypes.

“Until you make the unsconscious conscious, it will direct your life and you will call it fate.”

Max Eitingon and the Pillars of Psychoanalytical Education
The friendship between Max Eitingon and Sigmund Freud gave rise to a great change in the world of psychoanalysis. Read on to find out more! Read more »
Link copied!
Interesting Articles
Biographies
All About Hanns Sachs