Can You Trust Someone You Just Met?

To trust or not to trust? When you meet someone, you take the first step towards making that decision. But what factors help you decide? What tips people in one direction or the other? 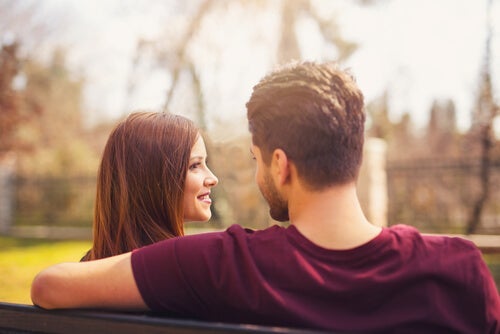 Not trusting people has a lot of negative consequences. You end up isolating yourself from the world and you can easily become paranoid. However, deciding to trust someone you just met isn’t the best idea either. You might let someone into your life who doesn’t deserve to be there.

The issue of trusting someone you just met is more relevant now that technology and social media make it so easy to meet new people. In the virtual world, more than in any other space, even someone who shares information with you is still a perfect stranger. There’s no way of knowing for sure if what they’re saying is true.

In the real world, it’s also possible for a relationship with someone new to quickly become intimate. Sometimes, it’s the beginning of a beautiful friendship or a romantic relationship. Unfortunately, it could also be the beginning of a nightmare. The question is, how do you know if you should trust the person you just met?

“Trust is like blood pressure. It’s silent, vital for good health, and if abused it can be deadly.”

You can’t always trust your instincts

According to a study by researchers from New York University and Dartmouth College, the brain only takes three seconds to decide if someone is trustworthy or not. The parameters your brain uses to decide are purely physical. For example, people with prominent cheekbones and high eyebrows are considered more trustworthy.

The area of the brain that makes these decisions is archaic. Among prehistoric humans, sunken cheeks probably meant hunger and a hungry person was less trustworthy. These parameters aren’t particularly useful in the modern world.

Likewise, studies show that people tend to trust someone they just met if they’re physically similar to someone they already know. This is also a weak and potentially deceitful reference.

As you can see, your gut feeling has some serious limitations. Intuition on its own isn’t enough to make a good decision about whether or not someone is trustworthy. However, it’s also true that experience tends to shape instincts. Although it doesn’t completely correct all its mistakes, it certainly helps.

Trusting someone is a process, not a revelation

Looking for the good in everyone and believing the best about people is a good way to approach the world. It’s another thing entirely, however, to give the key to your heart to a stranger you just met. Trust is something that you have to build over time; it doesn’t happen instantaneously.

In general, people on either end of the spectrum don’t inspire trust. We’re talking about people who share almost nothing about themselves and those who are like an open book from the first moment you meet them. People who are overly interested in you from the get-go and seem like they’re trying too hard to be liked are also harder to trust.

These can all be valid reasons for trusting someone or not. However, context is also important. Evaluating and observing their behavior in a vacuum won’t help you figure out if they’re trustworthy or not. Instead, you have to get to know their friends, coworkers, and family. That’ll give you a much more realistic idea about the person standing in front of you.

Signs to watch out for

If you’re not sure whether to trust someone or not, try to observe their behavior from the most neutral position possible. This exercise in patience and prudence will probably give you the information you need to make a decision. Here are some things to keep in mind:

In conclusion, having your reservations about someone you just met is healthy. The best thing you can do is let time do its job. If the information that you get is positive, the relationship will grow and mutual trust will naturally develop. There’s no rush. After all, good things are worth waiting for.

When you look into the eyes of someone you love, one second before putting your lips on theirs, time freezes. It…

Zentangle is a method of drawing that involves geometric repetition. The object is to promote calmness and meditation through structured patterns that…