How Does the Brain Process Emojis? 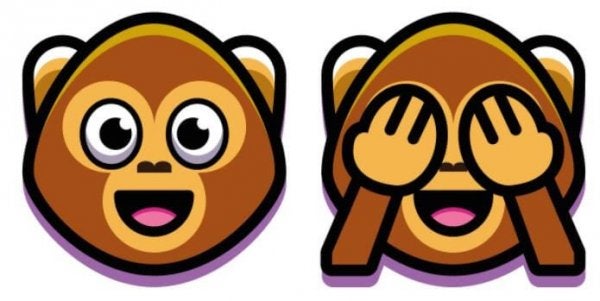 The way we communicate is changing at a dizzying rate. In fact, it feels like a car being pulled by the technology train, which has gone from useful to necessary to tyrannical in some cases. We’ve turned to writing to talk to people who are far away from us, or to embellish the display case that our social media profiles have become. In order to save ourselves from the limitations of written communication, we use emojis.

What do emojis do? In general, they simulate a face and accompany a message so that it can be understood in the right tone. “Hi 🙂 how are you :D” is not the same as “Hi, how are you?” In fact, emojis come to the rescue because written communication tends to be serious, so that’s how we interpret it, and if it lacks an accompanying emoji, it’s not unusual to think the other person is angry.

And if you write without using emojis, you might feel like the message you’ve sent has all the information, but it might not have everything you wanted to convey.

The origin and importance of emojis

Emojis are indicators of emotion. The first emoji dates back to 1982, and was used by author and computer engineer Scott Fahlman. The way he used them was very similar to the way we use them today, since he used them on forums as a way to indicate the difference between messages with an ironic and lighthearted tone from those with a serious tone.

Since then, there has been such an evolution in the use of emojis that in 2015, the Oxford English Dictionary chose an emoji – specifically the one that’s crying of laughter – as the word of the year. Maybe they were goofing around a bit with that decision, but it gives us an idea of how this form of communication has naturally become integrated into the way we express ourselves.

It’s no longer on forums, but like Scott Fahlman, we continue to use smiley faces to lighten the tone of a message, or as a response to a funny message. In fact, the typical “hahaha” is getting closer and closer to extinction because emojis are a more accurate representation of the gestures we make than a succession of h’s and a’s.

How do we process emojis?

Whenever a new form of communication appears, so does a new challenge for science: understanding what effects this new method has on us. One study, done by Yuasa, Saito, and Mukawa in 2006, which used MRIs to represent participants’ brain activity, showed that emojis aren’t recognized as faces. That is, the right fusiform gyrus, which is normally activated during facial recognition, showed no activity when exposed to emojis.

However, this isn’t the important part. The important part is that we associate each emoji – at least the most popular ones – with different emotions. So according to the researchers, this means they’re good at fulfilling their function.

In a later study, Churches, Nicholls, Thiessen, Kohler and Keage (2014) arrived at a different conclusion, stating that both faces and emojis activate the same areas in the brain. All of these areas are located in the occipito-temporal cortex.

It seems that due to our capacity for associative learning, our brains have somehow created a link between emojis and the emotions they’re intended to represent. Thanks to this link and technology, it appears as though these little images, which have even been turned into stuffed toys, have been permanently incorporated into our manners of interaction.

The study of emojis offers a wide range of possibilities. One question we could ask is whether the emojis we tend to use say anything about our personalities, beyond the immediate communicative context they’re used in.

These observations are purely for curiosity, since the study had too many limitations for these to be considered solid conclusions. However, it also opens the door to a very rich field that has yet to be explored. If anything is clear from studies like this, it’s that emojis are here to stay.

Social Networks Could Be the End of Your Relationship

Link copied!
Interesting Articles
Psychology
Dependent Personality Disorder: What Is It and Who Does It Affect?

The inability to be alone, an almost suffocating dependence on others, insecurity, no personal responsibility and an obsessive fear of…

Psychology
The Danger of Everyday Stress

All of us fear suffering. Sometimes, due to that fear, stress is created, and we try to steer our life path as far as possible from all "conflict zones" we may encounter. "It wasn't the depth…