Boredom in Relationships: Is it Normal?

Boredom isn't a plague, but a completely normal state in certain moments of your life. So, experiencing boredom in your relationship only means it's time to introduce novelties and variations. 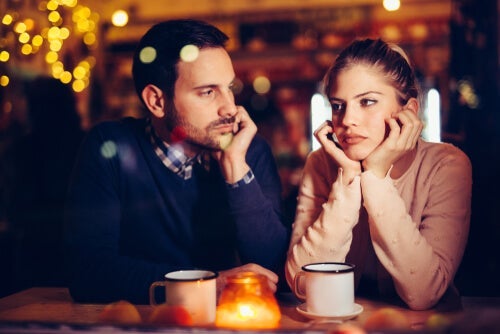 Boredom in relationships is as normal as being bored with your job, family, commitments, or any other constant in your life. Let’s start by saying that boredom isn’t a deplorable state. Also, it isn’t the end of the world nor as negative as many tend to believe. Boredom happens to the best of us, and keep in mind that only boring people get bored.

We can define boredom as a state of zero interest or motivation. The word “bore” as a noun meaning a “thing which causes ennui or annoyance”. So, according to the etymology, it would be something like “being annoyed”.

Being bored with your significant other, your job, your friends, or with whatever bores you is perfectly normal –under certain circumstances. Boredom is simply a consequence, not a problem in and of itself. It’s just like the darkness that allows you to value light more and vice versa.

“Boredom is a sign of satisfied ignorance, blunted apprehension, crass sympathies, dull understanding, feeble powers of attention, and irreclaimable weakness of character. Boredom is the feeling that everything is a waste of time; serenity, that nothing is.”

Boredom is depression’s “brother from another mother”. It’s a state that generates a lot of discomfort and easily leads to sadness. It sometimes leads to questions and thoughts about the true meaning of life. And if you obsess over it for a while, it could lead you to despair.

Isaac Asimov predicted that boredom would become the greatest disease in modern times. Why in modern times? It didn’t exist before? Not really. Perhaps, the only thing that changed is that, somehow, this feeling developed a bad reputation. Boredom acquired a negative connotation. And, as with everything “negative” in the age of “positive thinking”, it won’t be tolerated.

A person usually gets bored when they aren’t doing anything fun. More precisely, boredom is the alternate, fun version of their reality. People begin to feel itchy when their activities become routinary and extremely repetitive. Also, when there are no goals or objectives to look forward to or these are no longer challenging, attractive, or meaningful.

Boredom within relationships is often a sign of serious alarm. Of course, the first thing that comes to someone’s mind is the suspicion thay love is over. In fact, love and boredom in a relationship are realities that often coexist. Although they may seem contradictory, they aren’t.

It’s common for people to get bored with their significant other after a few years of coexistence, even months. Research on the subject indicates that the critical point of a relationship is between its fourth and seventh year because this is the time when the brain stops releasing dopamine and other substances associated with falling in love. Thus, we’re biologically ready to dispense with our co-parent when we know for sure that our genes will survive.

From a psychological point of view, boredom in a relationship could be a sign that the stage of romantic love is over. However, a study carried out by Sandra L. Murray, Dale W. Griffin, and John G. Holmes indicates that the more idealized the stage of falling in love is, the lower the likelihood of boredom after it.

When two people fall in love, what’s known as “affection anxiety” immediately activates in them. Starting a loving relationship with someone often generates the feeling that one’s life is undergoing an expansion. This is experienced as a psychological awakening that gives rise to many pleasant sensations.

In addition, there’s a need for protection and comfort, as well as fear of loss that come along with it. The antidote for all of this is to remain close to your loved one. When these feelings are clearly mutual, then the anxiety lessens. So, what these feelings indicate in reality is that there’s a strong need for connection with the object of your affection.

As time goes on, this feeling of individual expansion and psychological awakening decreases. What was once extraordinary becomes familiar and the exhilarating feeling of novelty disappears. And so do the enthusiasm and the accumulation of pleasant sensations that you experienced before. It’s at this point when boredom in relationships happens.

Keep in mind that things will never be the same as they were at the beginning. However, it doesn’t mean they have to be bad as there are many ways to rekindle the flame and avoid the feeling of boredom. You must start with yourself. Have you become boring? If so, reintroduce novelty as the main way to reawaken your mutual interest.

Narcissism in a Relationship
Contrary to what you might think, narcissists fall in love too. However, when there is narcissism in a relationship, the anxiety and fear can be palpable.  Read more »
Link copied!
Interesting Articles
Culture
Five Reasons to Start Drinking More Water

Culture
The Importance of Training Ourselves to Persevere