Body image issues come from the dissonance between our body perception and the beauty standards of modern society. In this article, we'll analyze the causes and consequences of this in young adults and teenagers. 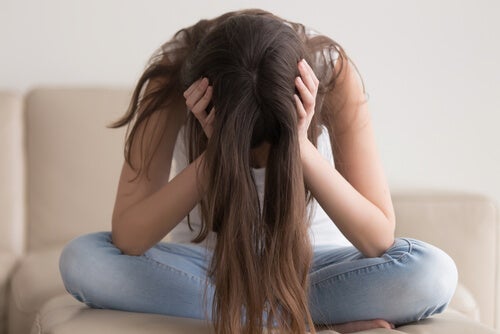 When we talk about body image, we refer to the mental and subjective representation of our appearance. Sometimes this perception is close to reality, but there are times when it couldn’t be further from the truth. Thus, body image issues stem from attitudes, feelings, and behaviors toward your physique.

Most people show at least some discontent about an aspect of their bodies. This is normal as long as the individual doesn’t feel the need to take desperate actions in order to change them. For example, undergoing surgery to shape or modify the body part in question.

The term used to describe this situation is known as body image issues or body dissatisfaction. When this discontent with your body leads you to adopt harmful behaviors to change it no matter the physical and mental risks, you definitely have body image issues.

There’s a very high prevalence of body image issues in Western society. This is why many experts and researchers have conducted studies during the last twenty years to finally determine its causes. They mainly investigated two different variable groups:

Clearly, psychological factors have everything to do with social factors. We could say they’re deeply connected.

Body dissatisfaction in youth and teenagers

As we mentioned above, perceptual, affective, and behavioral aspects condition our body image. We live in a society that gives excessive importance to the way we look. Actually, Western culture values thinness in women and muscularity in men more than they should.

In this sense, the media constantly bombards us with its idea of beauty. As a matter of fact, the industries dedicated to worshipping beauty and “ideal bodies” have increased their profits in recent years.

“Girls developed eating disorders when our culture developed a standard of beauty that they couldn’t obtain by being healthy. When unnatural thinness became attractive, girls did unnatural things to be thin.”

Although this problem affects all age groups, this message is most harmful during an individual’s teenage years. Adolescence is a period of change. Teenagers are striving to discover who they really are, which makes them vulnerable to change. Therefore, the influence of the messages they receive from society and the media can affect them more than any other age group.

In addition to the above, certain studies have pointed out that body image issues arise before adolescence. This discovery is quite alarming, which is why society itself should take measures in order to prevent this from happening to such young individuals.

Consequences of a negative body image

Body dissatisfaction sometimes leads people to adopt behaviors that are detrimental to their health, with the intention of getting an “ideal body“. For example, when it comes to weight, people may engage in behaviors such as restricting certain foods, fasting, and excessive physical activity.

When people adopt these behaviors before adolescence, their bodies may suffer from fatigue, bone injuries, gastrointestinal problems, or nutritional deficiencies. In severe cases, these actions can cause stunted growth, late puberty, or eating disorders. On most occasions, body image issues precede these types of disorders.

Eating disorders affect more women than men. However, there’s been a huge increase in the prevalence of these disorders in men in the past years. Men oftentimes show dissatisfaction when they perceive their body to be too thin or too thick and not muscular. On the other hand, women tend to be dissatisfied with their weight.

To prevent all these problems from happening, there’s an approach that has proven effective in various institutions, such as schools. It focuses on encouraging individuals to be critical toward the messages the media sends about physical appearance. As a result, children, teenagers, and adults will learn to identify what’s healthy and what isn’t and adopt healthy habits.

“It is health that is real wealth and not pieces of gold and silver.”

Family Dynamic and Eating Disorders
Eating disorders are disturbances or alterations of behavior linked to food that lead to deterioration of their psychological and family dynamic. Read more »
Link copied!
Interesting Articles
Illnesses
Learn All about Polycystic Ovary Syndrome

Chronic pain affects about 25 percent of the population in Spain. In a study of 5,000 participants, 43 percent reported having experienced pain in the last week, especially in the…

Health
Five Health Effects of Sleeping Too Much

Balance is very important for human beings. Thus, a lack of balance can lead to many physical and mental health…

Health
The Opioid Epidemic in the United States

Since 2012, a drug epidemic has exploded in the United States. The U.S. now has the highest number of opioid…