Body Dysmorphic Disorder - Why It Happens

The main reason why people may experience body dysmorphic disorder and aren't happy with their bodies is related to social pressure. Everyone thinks they have to meet the beauty standards set by the mainstream media. These organizations teach you to undervalue and hate yourself for not fitting into a certain bubble and it's all for the purpose of selling you things you don't need. 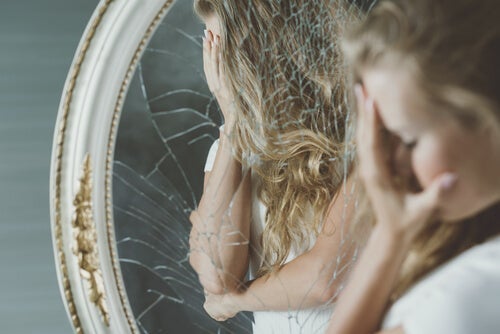 One of the effects of having a specific standard of beauty is that people end up unhappy with themselves and develop body dysmorphic disorder. This happens when a person doesn’t accept their body. Mainly because most people buy into the dangerous idea that they have to be physically perfect to feel valued and secure about their worth. Unfortunately, the result is one of life’s most useless types of suffering.

It’s true that, currently, many people in the world value others for their physique. And it’s also true that a beautiful person has more perks in life: from more lover options to better job offers. It couldn’t be any different in a world set in enlarging our eyes.

The decision each of us must make is to choose between two options: either passively join this logic or set limits. Everyone has one or many physical flaws. The problem begins when you start to measure the importance of these flaws from a marketing perspective. As a rule, this is the point where you begin to be unhappy with your body.

The need to be perfect

Actually, you shouldn’t wonder why you should be perfect. Instead, you must ask yourself why your beauty should be the same as the model of beauty that the world of marketing has imposed on you. Of course, there are many advantages to complying with such standards. But trying to achieve them could do you a lot of harm.

It’s quite common for people not to accept their body, precisely because they evaluate it from the imposed model of perfection. People are very visual today and are constantly exposed to images of people who represent the ideal of beauty. Therefore, it isn’t uncommon for a given individual to look in the mirror and feel disappointed.

That physical ideal has been continuously hammered into your brain since you were born. This is why it’s so difficult to ignore. Most people end up thinking that being physically perfect is normal and that anyone who isn’t is a freak of nature. However, the reality is just the opposite. Most people don’t look like the people in magazines.

When you don’t accept your body, you get into the habit of criticizing yourself, especially when you’re in front of a mirror. People get into the habit of looking for their flaws and evaluating them rather harshly. They may find they have a very round face, large ears that stick out, overly skinny legs, and a very large butt. Or perhaps the problem is their nose. This exercise in self-flagellation only leaves people frustrated because it’s never enough.

A person may also choose to accept their defects but only as long as they can hide them. For instance, women put on heels to look taller or buy a girdle so that others can’t notice the effects of the ten desserts a week they eat. And when they look in the mirror, they ignore those “little problems” they can’t hide from themselves.

Many times, people don’t accept their bodies precisely because they’re not able to look deeply into the image that the mirror reflects back. Let it be known that the more you try to ignore or hide a physical defect, the more importance you give it, at least deep inside. Also, know that accepting yourselves merely means recognizing the beautiful and not so beautiful traits you might have. It’s as simple as that.

Why can’t people accept themselves and others as they are?

A general answer to this question isn’t simple but you could say that you don’t accept your body because you’ve built a malicious self-image. Instead of seeing yourself through your own eyes, you do so as if you were the judge of some beauty contest.

The beauty standard the industry sells makes millions of dollars thanks to your personal fight with the mirror. Also, thanks to all those who also look at you with the eyes of a competition judge and decide to disqualify what they see. Keep in mind that those who judge you also have conflicting encounters with the mirror. Thus, they turn to you in order to relieve themselves of their self-criticism.

The worst thing of all is that you may even be rude to yourself and say things such as  “I look like a cow” or like “a monster”. This is how badly people with body dysmorphic disorder treat themselves.

In conclusion, you must accept your oh-so-human imperfection and respect it because. It doesn’t matter if you’re not “beautiful” to other people’s eyes.

Body Image: It’s Great to Have a Unique Body
The social environment and the influence of beauty standards makes body image a very complex portrait. A lack of self-esteem may lead to eating disorders. Read more »

You may hear this quite frequently. "If you want to improve your life, you must think differently". It sounds good,…

Although technology limits face-to-face dialogue, it's still important to establish a good means of communication. This is because the language…

The Qigong practice, also known as Chi Kung, aims for awareness regarding the application and optimization of body energy. It's…