What role do we play in our consumer society? Are we really aware of the price we pay for our most precious objects? What do we know about other real-life situations? The film Blood Diamond opens the debate on these questions. 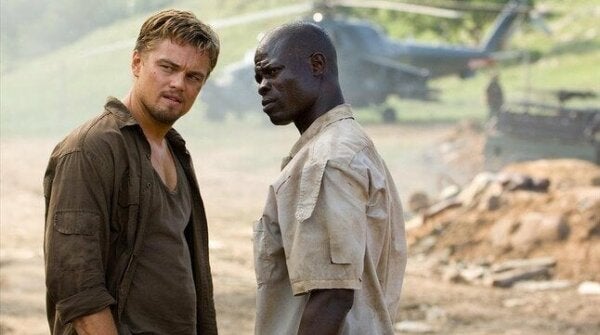 What’s the real story behind the precious jewels you buy? What’s the real consumer world that you’re involved in? These are some of the questions you may ask yourself after seeing Blood Diamond (Edward Zwick, 2006). It’s a film full of emotions, violence, and adventure, with a critical element that you can’t ignore.

The film is based around a true story, the Sierra Leone Civil War and the diamond trade, and that serve as the background. However, Blood Diamond doesn’t just focus on the war; it simply uses it to shape an adventure in which two characters from different worlds become allies.

Danny Archer and Solomon Vandy team up to obtain a diamond that could change their lives, albeit in very different ways. Solomon sees his life fall apart as the war comes to an end. The Revolutionary United Front rebels storm his village, destroying families, including Solomon’s.

They recruit him to search for diamonds; diamonds that the RUF will use to finance the war and acquire weapons. Solomon’s family manages to flee, although their young son Dia is captured and forced to become a child soldier.

Then, on the other hand, we have Danny Archer, a white man who smuggles diamonds. The men’s paths cross in prison; Archer hears that Vandy found a large pink diamond, and so he tries to get Solomon out of prison and start the search for the diamond.

The film is extremely raw, with tremendously violent and tragic scenes. It succeeds in capturing the pain and helplessness in the face of such a harsh situation and forces us to contemplate something that people in the West would prefer not to know about.

The two main characters, played by Djimon Hounsou and Leonardo DiCaprio, give magnificent performances. DiCaprio, in particular, plays his part with an impressively convincing accent. Both characters represent the two sides of survival in a world where corruption, injustice, slavery, and violence are the order of the day.

The leading duo is joined by an American journalist, Maddy Bowen, a young idealist who perfectly characterizes much of Western society. Sometimes, we tend to think that we can change the world and that, by doing our bit, we can really influence society.

There’s an element of truth in this statement, of course. However, when someone is plunged into the darkest depths of humanity, this positive outlook tends to fade away.

In the West, we sometimes tend to forget that the world isn’t as easy to live in as we’ve been told. It’s not that idyllic place where we can achieve everything we set out to do. We’re never far from corruption nor are we free from violence.

There’s an infinite number of problems we’re aren’t aware of, and which we’re actually part of to some degree. In a way, the media encourage this outlook. You just have to turn on the news to see how the same type of tragedy is presented differently, depending on where in the world it’s happened.

If the tragic event takes place in Europe, we’ll probably be moved by it and it’ll be given a lot of coverage in the news. However, if it takes place on the other side of the world, then it’ll be dealt with in a matter of minutes, and probably in a more superficial way. Thus, are we really aware of the situation beyond our borders? This is one of the questions we have to ask ourselves when we meet Maddy Bowen.

Maddy is a faithful reflection of the young Western woman who believes she can change the world. She’s the reflection of those ideals and the power behind them. However, she soon sees that they’ll serve little purpose in an environment where survival is paramount.

Surviving by any means possible, and escaping and fighting in a hostile world, something that Vandy and Archer are more than used to, contrasts greatly with the way Maddy sees things.

Maddy believes that if she can get a good story, she can raise awareness, or at least engage people. She really does think that she can stop people from closing their eyes to the terrible situation in Sierra Leone. The problem is that good intentions sometimes aren’t enough.

We can question Archer’s attitude enormously – the fact that he gets rich at the expense of other people’s suffering. However, we discover that this is his way of surviving and that all he wants is to be able to flee the continent.

Vandy, on the other hand, represents family values. His love for his family moves him to disobey, risking his own life by hiding the precious diamond. Vandy could’ve given up the diamond, bowed his head, and continued his slavery. He’ll do anything to be reunited with his family, though, and he decides to take a chance.

Despite the dubious values embodied by these characters, and the questionable attitudes they may represent, especially Archer, we soon realize that the real enemy is none other than power, corruption, and, in a way, the consumers themselves.

What’s the price of consumption?

Blood Diamond goes beyond simply representing good and bad; it goes beyond the characters themselves. What the film really offers us is a reflection on the world we live in, the inequalities, and the consumerism we all play a part in.

The Western countries themselves buy jewelry that comes from exploitation. With this money, they finance the RUF’s weapons and, as a result, turn children into soldiers, which is what happens to Dia.

At the same time, the three characters represent, in a way, this circle of interests. Maddy comes from the West, from the consumer society, from those people who, by buying the diamonds, finance the arms. Archer is the intermediary between the two continents: the one who sells the diamonds. And, finally, we have Solomon, who belongs to the world of slavery, and to those who have to find the diamonds that will later be sold and bought and worn by some wealthy Westerners.

In this way, we see how these characters act according to their own particular reality and context. Each of them faces their own individual situation in the way they see fit. As their paths cross, they embark on a journey of adventure, survival, and dramatic situations.

It’s a fight against the powerful tide of corruption and injustice. It’s a David and Goliath struggle, in which the precious diamond is the guiding thread and, even though it may seem a contradiction, the path to freedom.

Blood Diamond leaves us with countless questions about our own role as largely irresponsible consumers. Are we really aware of what we consume? Could it be that our most precious objects are stained with blood? And what about if we take this beyond the diamond trade? What about simple and everyday items, such as clothes, food, or technology?

Is it fair to pay an exorbitant price for these items? Are we simply victims of the time and place where we were born in? Maybe we have the power to change things!

Blood Diamond opens this whole can of worms. It introduces us to a cruel and violent reality by means of some perfectly created characters, all with different lives and dreams, but with one single goal: to survive in a hostile world.

“Who do you think buys the stones that I bring out? Dreamy American girls who all want a storybook wedding and big shiny rock like the ones in the advertisements of your politically-correct magazines.”

Six Academy Awards Films You Must Watch
The hangover from the latest Academy Awards gala makes it a good time to remember award-winning films. Every winner has made history in their own way. Read more »
Link copied!
Interesting Articles
Cinema, Television, and Psychology
5 Lessons from The Jungle Book