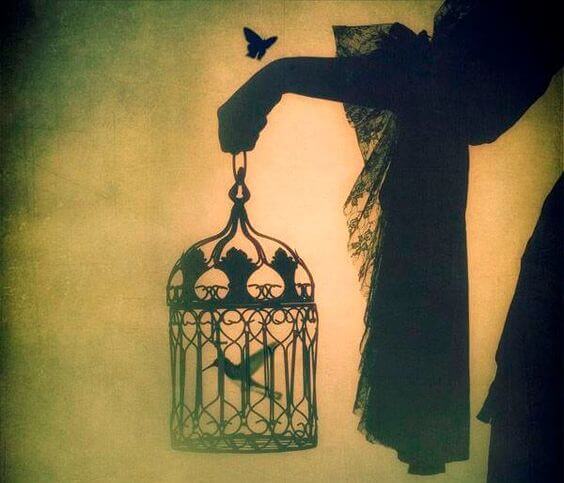 A bird is born to be free. Hence, if it is locked up in a cage, it will feel like its whole essence is being limited to a tiny slice. It is as if its wings were cut off, along with one of its most characteristic traits, its ability to fly. The title belongs to Alejandro Jodorowsky, and it will help us see how something similar can happen to human beings.

Metaphorically, living within the cage like a trapped bird doesn’t let you have a wider perspective of what you can experience in life. There are people who settle for what they already have, with the things that they feel safe with. They don’t let themselves explore other fields full of new experiences. This is not a negative thing if it only affects the bird or if it is its own choice. The problem arises when the bird thinks that everyone else is wrong or mistaken for flying.

“The nightingale refuses to nest within a cage, so that slavery won’t be the fate of its young.”
-Khalil Gibran-

Similarly to a bird, human beings are born to guide their steps towards where they want to go, freely and autonomously. However, there are people who, due to different reasons, such as education or social influence, park in their so-called “comfort zone” when they reach a certain age. And they can’t seem to get out of it, even if they are pushed to do so.

This “comfort zone” has to do with what is familiar to them and what makes them feel protected. In this zone, routine dominates. In fact, it’s very hard from them to “escape” these behavioral patterns and acquired values. This makes them feel uncomfortable with those who are different from themselves.

Since we are free, no bird is obliged to come out of their cage and take flight. But also, none is forced to stay either. We must be tolerant and understanding of lifestyles different to our own in order to maintain personal relationships.

“Man is free. He has to be free.
His first virtue, his great beauty, his grand love is liberty.”
-Juan Ramón Jiménez-

One of the most well-known individuals worldwide, Nelson Mandela, believed in the freedom of one’s mind above everything else. Covered eyes will always be able to rid themselves of their blindfold. But a blind mind will have a much tougher time.

Those of us who can’t see ourselves within a cage feel judged on many occasions by inflexible minds. “You’re crazy.” “That’s not a proper way to behave.” “What you are doing is not right.” ” What will others say about you?” These are common phrases heard by someone who dares to fly.

You have to ignite your mind, not fill it

If a bird has wings to fly, humans have a mind that also lets them fly. However, the mind needs to constantly be ignited. We need to give it seeds that will help it think, not fill ourselves with preconceived ideas.

Some people act like birds who have spent their whole lives in a cage. They are, therefore, scared to leap out when the door is opened. They may or may not judge their friends for doing so, but simply are too afraid to dare do so themselves. The only thing they need is bravery and guts. “Sapere aude” as the philosopher Kant would say: dare to know, learn, and use your reason to achieve it.

“Freedom is scary when you have become unaccustomed to using it.”
-Robert Schuman-

If one day you see me looking sad, don't say anything, just love me. Sometimes when I'm broken inside, I don't…

Wellness
12 Things To Be Grateful For Every Day

Lately, perhaps for lack of rest or  because of my routine I feel that I find it harder than usual…

Wellness
Motherhood: An Earthquake of the Soul

We now know a lot about what being a mother means. However, few probably take a very realistic approach to the crisis…

Wellness
Forgiveness and a Clear Conscience Make a Good Pillow