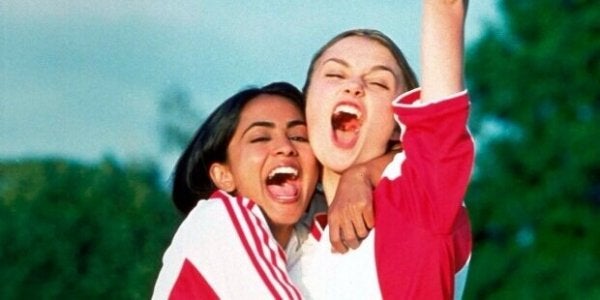 We live in an increasingly global world where cultural differences are blurred. As a consequence, we have to make an effort to reconcile the small differences that may arise in order to seek balance and mutual understanding between cultures. Bend It Like Beckham provides an example of cultural integration and how society changes over time.

Bend It Like Beckham is a British film that was released in 2002. It was directed by Gurinder Chadha, a British director of Indian origin. Throughout her career, Gurinder Chadha has tried to capture the culture diversity of Europe in her films and documentaries. Inspired by her own experiences, most of her work tries to reconcile what it means to be both British and Indian, as in Bend It Like Beckham.

Until recently, it seemed that cinema was exclusively the realm of white men. Even today, not many women directors exist. Gurinder Chadha is a British-Indian woman. Her film Bend It Like Beckham tells a story not only about the reconciliation of cultures but of a world where women are relegated to the background: football.

Bend It Like Beckham is not a complicated story. It’s simple, entertaining, and enjoyable. It has the typical ingredients of a romantic comedy, pokes fun at stereotypes, and paints a portrait of a new generation that enjoys a fusion of many cultures.

“If she likes playing football more than chasing guys for now, I’m happy for her.”

Bend It Like Beckham takes place in London in the early 2000s, during a time when football player David Beckham was an icon. The city of London is home to a true mix of cultures. It brings together countless people from very different backgrounds and realities. The film focuses on two young football fans from different origins. Jesminder, known as Jess, is a girl of Sikh origin, and Jules is a British girl.

These cultural differences give rise to some funny situations, especially with Jules’s mother, who considers herself a modern and open woman but is very stereotypical. Both Jess and Jules have to face their environments and their families to achieve their dream of being professional football players. Football unites these two young women and reconciles their cultures.

“When will you realize you have a daughter with breasts, not a son? No boy will want to go out with a girl who has more muscles than him.”

Jess has a hard time communicating with her family and telling them the truth. Everyone expects her to go to college and become a great lawyer. Her family has struggled a lot to give their daughters an education. However, they don’t take into account that perhaps that isn’t the most important thing for Jess. Her parents have many expectations and tend to reject any changes they see as threatening.

“Mother, just because I wear trakkies and play a sport doesn’t mean I’m a lesbian!”

The issues of marriage and sexuality are important in both families. Jules’s mother will do everything possible to make her daughter feminine rather than a tomboy. Despite her image of a “modern and tolerant” woman, she’s worried about Jules’s sexual orientation. She says she accepts homosexuality and doesn’t think it’s wrong, but doesn’t want it to happen in her family.

Jess’s family wants their daughter to follow tradition and marry a young Indian, just like her sister. We see that the role of women and the idea of an arranged marriage have different meanings in their culture. Even so, both girls have a different mentality than their parents. They have had to live with different cultures and think differently.

“At your age, I was already married. You don’t even want to learn how to cook.”

Football as a link

Sports should allow us to leave our differences behind and unite people, but sometimes this isn’t the case. In Bend It Like Beckham, we see that football links Jules and Jess. But the truth is that we also see a less positive version as well.

Football is a sport capable of paralyzing an entire nation or mobilizing an entire nation. However, this only happens when we talk about men’s football. Women’s football, unfortunately, is almost unknown to the vast majority of the population. It barely appears in the media. It’s a world we barely know about, and the salary difference is astounding. We know more about second division men’s teams than we do about first division women’s teams.

The protagonists of this film have to deal with striving for respect in a male-dominated sport in addition to facing their families. Many of the scenes invite us to think about the roles women play in sports because it seems that women can only stand out in synchronized swimming or gymnastics.

Jules: Yes, but it’s not just an Indian thing. How many people support us?”

At some point, we see the kids fantasize about what the girls would look like in the locker room, and the movie shows it in a totally natural way. The girls, like the boys, change quietly and talk about all kinds of things, from football itself to menstruation. In the locker room, there are no taboos. The girls act like themselves.

At first, Jess feels somewhat insecure because she feels different. She feels this way despite having grown up playing football in the park and admiring Beckham like everyone else. She believes that all the girls understand and support her decision to play football. And when the girls get to know Jules’s reality, they understand they aren’t so different from her either.

Bend It Like Beckham is a good movie that audiences enjoy. It shows us the possibility of harmonious co-existence between different cultures. In addition, it alerts us to the struggle of women’s football, which is totally unknown to most of the population. In short, it’s a film that invites us to embrace other cultures and understand that our reality isn’t the same as it was even a few years ago.

Sisterhood: The Value of Women Coming Together
A sisterhood is a social, ethical, and emotional pact between women. It's based on an understanding that together we are stronger than we are as individuals. Read more »
Link copied!
Interesting Articles
Cinema, Television, and Psychology
5 Addicting TV Shows with Psychological Themes