Behind Our Emotional Masks 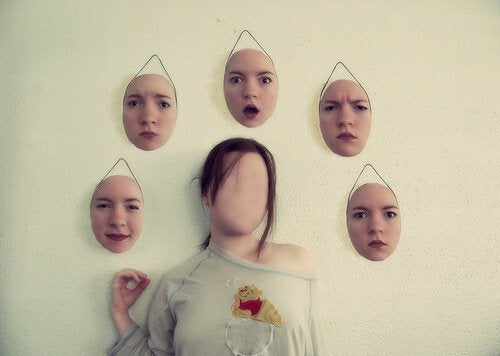 Many people are successful, happy or have a seemingly perfect life. Is it really so? Nope. Many of them appear to be something they are not. It’s what is known as wearing a mask.

Depressed people appear optimistic, people with anxiety appear to be relaxed. These people wear a mask so that others don’t see them as they really are.

“Choosing one’s own mask is the first voluntary human gesture. And it’s a lonely one.”
-Clarice Lispector-

A controlling person may be someone who was betrayed before. Due to the pain they suffered, a person will develop a behavior in which they ensure that others keep their promises. They also have dark side that stems from insecurity which is why they feel it is necessary to control everything. The mask protects them from the pain of betrayal.

A rigid person may have previously suffered a situation of great injustice. As a result, they become inflexible, always seeking justice and accuracy.

A rigid person becomes a perfectionist. So much so that it becomes an obsessive attitude. By studying and scrutinizing everything, rigid people try to prevent injustice from peeking its head through the door.

A dependent person may suffer serious pain from the feeling of abandonment. This wound keeps those wearing this mask from becoming close to anyone. They don’t take any relationship seriously and reject the idea of ​​living with someone.

The pain of neglect is terrible. A person wearing the mask of dependence suffers from the core by not being able to trust that those who are most important never abandon them.

The runaway rejects being in the company of others. They prefer solitude or moments of tranquility. They totally reject being the center of attention, which is in fact something that terrifies them. A runaway flees because they have been rejected and that has caused such a serious wound that they can’t help themselves from doing it.

Runaways can’t stand not knowing how to act in certain situations, dealing with embarrassment or feeling lost. Simply because this will cause others to reject them. In their solitude they are not vulnerable or insecure. The mask protects them from what hurts. Is it cowardice? No. Its just avoiding what we know we cannot control or prevent from hurting us.

The masochistic person can be a mental or emotional masochist. This attitude comes from a feeling of humiliation and shame from the past. This causes them to always have to solve other’s problems by doing everything for them while lowering and humiliating themselves. It’s something they need.

Masochists don’t, as the other masks mentioned above, try to  prevent or escape their pain. Masochists face what hurts them by finding more pain. They were hurt in the past and had no control over it. Now they have control and they decide for themselves whether or not someone will hurt them. In their heart, this helps them deal with their situation.

As we have seen, there are many different masks we can put on to try to deal with emotional wounds that we have suffered. The people who wear masks are easy to identify because at some point their hidden self emerges.

It’s best to overcome what has provoked fear in us. Wearing these masks simply adds a layer of separation between ourselves and others, and can prevent us from living from the fullness of our own beings. Are you wearing any of the masks mentioned above? Do you know someone that has one on?

When we close a chapter in our lives, it is the end of a story. When we say goodbye, we…

Psychology
That Voice in Your Head... Is Your Ego

That voice in your head that guides you and responds when you ask who you are... is called your ego. But,…