6 Attitudes That Push You Away From Others 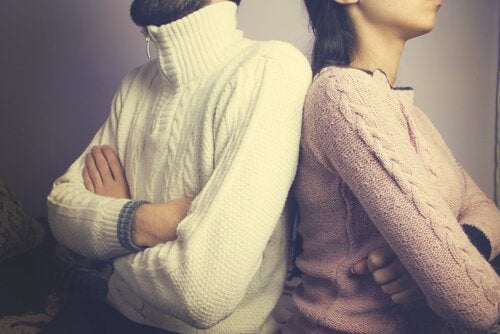 Being physically apart isn’t the only way to end up being distant from your loved ones. Sometimes, even when they’re right beside you, you can feel like they’re not there at all. With relationships, your connection doesn’t just grow from being physically close to each other. It also grows from exchanging affection, actions, and intentions. That’s why it’s so important to be careful about the kinds of attitudes that push you apart, instead of bringing you together.

You also have to keep in mind that this kind of psychological distance can be the result of many different problems or obstacles, whether yours or other people’s. That’s why it’s essential for you to check yourself. You need to see how you’re doing because it’s a great way to get information. At the end of the day, it doesn’t matter why they’re happening: these are painful situations. Let’s delve deeper into that.

“The scariest thing about distance is that you don’t know whether they’ll miss you or forget you.“

What exactly pushes you away from others?

Since humans are social creatures, only psychological problems could make you want to be away from other people. If someone constantly refuses to be around other people, they might be dealing with issues you just haven’t noticed yet. On a clinical level, depression could be a reason for this. If that’s the case, only a specialist can help whoever is suffering from it.

There are also other attitudes that have more to do with psychological traits that make you push yourself away from people. They might not be disorders or conditions, but these attitudes still harm your relationships with others. Now we’re going to take a look at some of those attitudes.

According to Merriam-Webster, selfishness is “being concerned excessively or exclusively for oneself or one’s own advantage, pleasure, or welfare, regardless of others”. Selfish people don’t care about other people’s interests or desires. They always seem less important than their own.

These kinds of people don’t give any thought to other people’s problems. They look the other way. It’s hard to bring issues up with selfish people because they refuse to acknowledge any problem that originates with them. In fact, they’ll usually find the problem in the people who are telling them about their concerns. This almost always leads to separation, both physically and emotionally.

Here, the toxic attitude displayed by an abuser has a direct reflection in the person they abuse. Abuse means to “treat with cruelty or violence, especially regularly or repeatedly”. In cases of abuse, the abused person deals with intensely negative psychological experiences and feels like the abuser pushes themselves away from the idea they brought up. The abuser also psychologically pushes themselves away from the person they abuse. They’ve stopped paying attention to their feelings, treating them like they’re a meaningless object.

But this is a very particular situation. Even though the abuser’s behaviors and attitudes push their victim away, there’s still a hidden kind of manipulation that stops them from actually separating most of the time. Basically what we’re saying is that this kind of relationship is miles away from a conscious, affectionate, healthy bond between two people.

Directly related to abuse, contempt can take many different forms. For example, the humor in extreme sarcasm might just be covering up a desire to hurt the other person. It’s usually because of a sense of (intellectual) superiority on the part of the person who feels contempt.

In fact, according to the dictionary, one common synonym for contempt is “disdain”. It’s a kind of disregard, it means setting yourself apart from the other person. That’s what makes it one of the attitudes that can push you away from others. Treating people from a place of superiority is nothing more than a form of rejection.

This is one of the most common attitudes that can push you away from someone. It can also seem harmless at the time. Lying means hiding the truth or fabricating it. It’s like putting on a mask to hide something that you don’t want to show.

But how can you trust someone who lies? How can you expect someone to trust you if you lie? It makes perfect sense that lying would push people away from you. It’s like boycotting honesty, and it does nothing but wear down your bonds with other people. When you lie, you aren’t letting them get to know you.

When you take up this attitude, it can be extremely damaging to your relationships. It’s not just because it diminishes the meaning of what a victim is and makes it so that real victims lose credibility. It’s also because you’re forcing other people to feel unnecessarily guilty.

Victimization is a kind of self-deceit. It’s proof that you don’t have the ability to self-regulate and take control of your emotions. These kinds of people settle into constant complaining and criticism as a way to survive. They blame other people for their own unhappiness or any other negative state of mind they’re in.

Related to contempt and abuse, manipulation is the result of feeling intellectually superior. Manipulative people try to influence other people’s attitudes for their own personal gain. They usually charge forward with their intentions because of that feeling of intellectual superiority. But when the people around them start to realize what they’re doing, their instinct is to reject this person.

As you can see, the attitudes that push you away from others are harmful to any good relationship. That’s why it’s so important to learn to identify them. That way you can build healthy and fruitful relationships with other people.

The Importance of Attitude
Of everything you have going for you, your attitude is the most important. It is what will fit you with the best shoes Read more »
Link copied!
Interesting Articles
Wellness
Explosive Anger is a Sign of Something Serious

We've all lost our temper at least once in our lives. You know the feeling. Anger takes over your thoughts,…

Working in Healthcare can be a complicated task. Healthcare professionals are always working to keep or restore people's health and…

Wellness
If You're Happy, You Hug. If You’re Unhappy, You Shop.

The problem with consumerism is that it carries within it a deceitful promise: if you buy the objects you want,…

Wellness
5 Reasons to Love Yourself Just the Way You Are

When was the last time you compared yourself to someone? Probably not long ago. We live in a society that…