Attitude and Inspiration: The Ghanaian Teacher Teaching IT with Chalk and a Blackboard 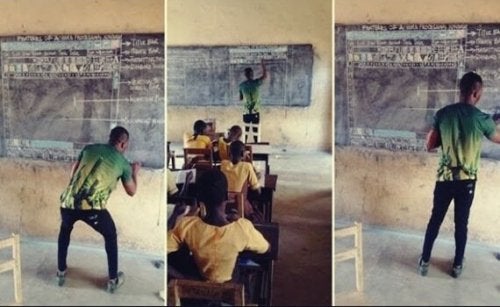 He may have no resources, but he does have motivation. He may have no computer, but he has the will to teach IT to his students with chalk, a blackboard, and plenty of energy. The picture of this Ghanaian teacher drawing Microsoft Word’s interface in his classroom has gone viral. It’s an invitation to think about how to change the world (or improve it), sometimes you just need attitude and willpower.

The hero of this story is Owura Kwadwo, an information and communications technology (ICT) teacher at a small school in Kumasi, Ghana. It’s a rural environment, without many educational resources, and also no Internet. It might seem odd, but part of the students’ curriculum involves learning basic IT skills.

Passion for what you do is what teaches you that, in life, the only real limits are in your head.

Mission impossible? Of course not. Even if the conditions aren’t great, as human beings we can use our attitude to overcome any obstacle. Plus, we can also inspire other people. We can show them that it’s not about what you’re missing, it’s about what you can do with what you have.

That’s exactly what Mr. Kwadwo does every day with his students. There isn’t a single child who doesn’t feel motivated in his class. They all know that technology will help their country progress. Then, when the time comes, when they finally have a computer in their hands, they’ll absolutely know how to use it. In the end, it’s all thanks to their teacher.

The Ghanaian teacher teaching IT classes without a computer

It’s astonishing how easy and how fast images can travel around the world. It takes only a few minutes for everyone to see them. A few months ago, the world fell in love with Wang Fuman, an 8 year old boy from a Chinese province who walks almost 3 miles to school every day. The temperatures in January can get as low as minus 10 degrees Celsius. One day, Wang came to school with his hair and eyebrows frozen and his cheeks bright red.

His classmates welcomed him with laughter and smiles. Then his teacher decided to take a photo of him to share a reality most of us are unaware of. The same kind of thing has happened in this little classroom in a Ghanaian village. But the main character here isn’t the cold, it’s irony. It’s the story of an IT professor without a computer. It’s the students who have IT classes because they have to take an exam on the subject every year to make sure they’re competent.

Now we could start talking about the well-known differences between first-world and third-world countries. Instead of talking about something we probably have the same opinion about, we’re going to focus on the people. We’re going to focus on the little stories, the stories of people with names. Owura Kwadwo teaches his students how to use a program he himself has never used. But that doesn’t have to get in the way of his students familiarizing themselves with a basic office tool.

Every day, with the help of colorful chalk and a blackboard, he makes a detailed, precise drawing of this part of Word. He says he loves his students and will do everything he can to help them learn. All the teachers in this school do what they can to help their students, but this teacher goes above and beyond. He draws his pictures as quickly as he can so that they clearly understand each process, function, and command. He knows that, out of all their other subjects, being good at IT will really make his students stand out. It will make them much more competitive when it comes to getting jobs later in life.

Do these students really learn to use Microsoft Word from a blackboard and a teacher who isn’t very skilled in using a computer? Many people would probably say no. But these kids are full of curiosity and motivation. Every day, they have a visual stimulation that helps them use their imagination and push their minds beyond any first-world child. Their dream is to have a computer in front of them. And they’ll know how to use it.

It’s worth remembering that major figures in technology, like Bill Gates, learned without computers. They were educated without one and still managed to come out on top in the field. This Ghanaian teacher does the most important thing of all: he makes sure his students take an interest. In this regard, if there’s one thing we know about education, it’s that the best way to stimulate your students is motivation and attitude.

Owura Kwadwo teaches from his heart and from necessity. He knows that teaching IT without a computer is like teaching someone to drive without a car. It’s hard, but it’s not impossible. Not if you put in all your effort and grab your students’ interest through images, colorful chalk, and commands that help them visualize every step and understand every function.

That’s why, just a few days after the image of this Ghanaian teacher went viral, Microsoft got in touch with the school to send them a computer. The response to his story has been phenomenal. Now we just have to hope that over the next few weeks that village and others like it in Ghana will get the resources they need. Sometimes, small stories and the attitudes of the most humble people are what really change the world. They’re what really open our eyes to just how many things we can accomplish with the right attitude.

The Curious Puppy: A Beautiful Story About Self-Reflection
The story of the curious puppy is all about self-reflection. It begins in a wooded place far away. There in the depths of the forest was an abandoned house... Read more »
Link copied!
Interesting Articles
Culture
7 Habits That Make You Less Attractive

January 22nd was the 10 year anniversary of actor Heath Ledger's death. He died young, at age 28, but left…