Asthma and the Mind - A Tight Duo

What's the relationship between asthma, the mind, and body? Today, we know that anxiety and depression worsen the symptoms of this disease. Likewise, asthma and certain emotions activate the same regions of the brain. 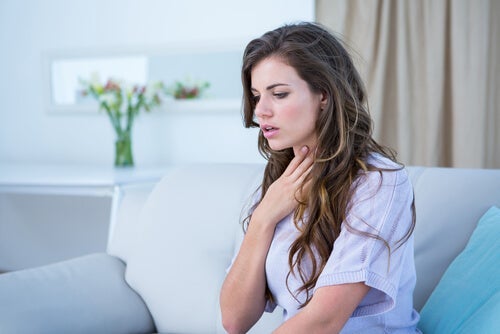 Researchers often consider the relationship between asthma and the mind. In fact, they have for a long time. It’s rather easy to notice the connection on a sick person’s daily life. What’s most obvious is the link between stress, anxiety, and an asthma attack. What science discovered in this regard isn’t too clear, however.

So the question remains: is there a true relationship between asthma and the mind? Or is it just a tall tale? A few decades ago, people still believed that the idea of how emotions impacted asthma was mere speculation. However, with our scientific advances, we now know that this connection is undeniable.

Science defines asthma as a chronic disease characterized by inflammation and airway obstruction. It’s the most widespread chronic childhood disease.

Estimates indicate that at least 60% of asthma cases afflict children. Many of their triggers are definitely psychological. Thus, the relationship between asthma and the mind is undeniable.

The relationship between asthma and the mind

Dr. Zofel Marx and his colleagues conducted a study with asthma patients to determine if, indeed, their emotions triggered their attacks. His research consisted of comparing the emotions of healthy patients with those of people with asthma to establish if there were any differences.

In the end, they concluded that those with asthma had more hostile attitudes, greater feelings of helplessness, and were sadder than healthy patients. To verify it, the researchers exposed both groups to various stimuli to observe their reactions. However, the emotional difficulties they observed could be just one effect of asthma and not its cause.

In any case, other studies corroborated these findings. They proved that up to 50% of those with asthma have symptoms of depression. Likewise, those who present these symptoms, or manifestations of anxiety, have more frequent attacks and doctor visits. Similarly, antidepressants decrease asthma symptoms.

A study conducted at the University of Wisconsin-Madison established that there’s a clear connection between asthma and the mind. This research led to the conclusion that asthmatic processes are linked to two areas of the brain that are closely related to emotions: the anterior cingulate cortex and the insula.

Professor Richard Davidson, director of this research, used magnetic resonance imaging to demonstrate it. For this, he started with a group of six volunteers afflicted by asthma and gave them a series of substances that aggravated their disease.

When observing the brains of the volunteers, Davidson found that the stimuli activated both the anterior cingulate cortex and the insula. As we mentioned above, these areas are strongly related to emotions. Although he published his research, it’s still not conclusive because he conducted it with a very small group of people.

The research on asthma and the mind continues

Science already established a connection between asthma and the mind. What we don’t yet know is the scope of this connection nor the exact mechanisms that regulate it. What’s clear is that psychological factors are determinants in the course of this disease. Depression or anxiety definitely lead to asthma outbreaks.

Dr. Antonio Cano Vindel, from the Complutense University of Madrid, points out that anxiety affects asthma in two ways:

Thus, there’s a relationship between asthma and the mind. Neither in this case nor in the case of other diseases can you separate the physical from what happens in your brain. The old maxim is ratified again: a sad soul can be just as lethal as a germ.

4 Effective Breathing Techniques to Reduce Anxiety
Breathing techniques require us to remember that this metabolic act is much more than just a physical process. Because breathing well produces pleasure, relieves anxiety and allows us to live better. So, including this exercise into our day-to-day life would help us to live more consciously, focused and harmoniously. Read more »
Link copied!
Interesting Articles
Brain
Isolated Brain - Living without a Body