An Honest Open Letter to Anxiety

This letter is to tell you that nobody likes you, anxiety. Everyone understands you're just trying to help in your own special way. However, things have changed a lot since that abrupt first meeting and you need to find a new place to go. 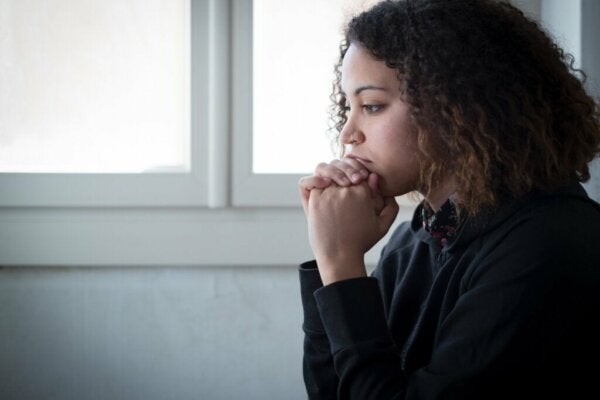 Narrative psychotherapy is about using techniques such as this letter to anxiety. Its goal is to help you discover your current relationship with it. Humans are ever-changing and it might be a time for you to redefine it. In other words, move it where it makes you feel more comfortable and honest with yourself.

The human relationship with anxiety has always been complicated, often tortuous. However, there are times when it also provides the push you needed. This letter to anxiety is about realizing how much it hurts and, above all, wondering about those things that are still unanswered.

“Anxiety is love’s greatest killer. It makes others feel as you might when a drowning man holds on to you. You want to save him, but you know he will strangle you.”

Letters usually start with something like “Dear friend” but this is a letter to anxiety. Thus, it’s hard to address it as a friend and even more to actually think it dear. Haven’t you heard time and again that love isn’t supposed to harm you? Yet, the blade of anxiety is quite sharp and can go quite deep.

Thus, use perhaps “Distinguished companion”. This is mainly because anxiety is with you at different times and there’s little doubt about its presence. It’s definitely noticeable in many of your life experiences.

“Distinguished companion, this letter is to rediscover where you are at this moment. How much it hurts to have you around at the present moment. People change and everyone needs some space to think about it.”

It would be hard not to include a reference for your first encounter with anxiety in a letter to it. Its abruptness makes a huge dent in your memory the first time around.

Abruptly because it cruelly shook your body and you felt like you were dizzy and drowning. Your heart pounded so hard in order to escape a death that suddenly seemed imminent. Anxiety crept into your sleep and appetite and pained your entire body. To say you lost control is an understatement about the way you felt at the time.

After a long time, someone finally named it. It was neither your heart nor a fatal disease as you imagined. You were the recipient of anxiety and, the unanswered questions and pain began: “Why now if I’m fine?” “How can anxiety do all this?” “What do I have to do to get rid of it?”

Knowledge led to an appreciation

Long before this letter to anxiety, you hated it and even tried to get rid of it. Perhaps you yelled “What do you want from me?” a thousand times. Of course, you had many reasons to hate it: pain, exhaustion, and isolation. It’s hard not to hate your anxiety when it kept you away from the people you loved the most. It forced you to an implicit vow of silence that didn’t allow you to call it by its name.

Hatred isn’t an emotion that can last too long though. Its intensity is exhausting and you were already tired of so much anger. Later, you found yourself accepting, with great difficulty, that it would stay with you indefinitely. You decided to listen and asked yourself those same unanswered questions as patiently as you could.

You may already know that anxiety tends to respond by echoing: “Are you sure everything was fine?” “Why now?” This echo revealed that you finally got to know something about this anxiety. It was there to amplify your long-silenced voice. A voice so often interrupted that finally strived to be heard no matter how. However, even today, you resentfully wonder: “Was it really necessary for this voice to be heard?”

Ok, you’re still incapable of addressing anxiety as a friend even though it’s been a loyal companion throughout your difficult path. However, this dear friend is rather versatile and a good listener — it can listen both internally and externally.

Yes, a good listener is a true friend. One of those who tell you the good things you may not be aware of at the moment and, thus, you can’t value as well as when you’re screwing up and need to pay attention. Indeed anxiety is your friend even when it reveals it’s conflictive side. However, you must learn to respect this friendship, even when you don’t enjoy its company.

End this letter to anxiety by sharing how you think about it at this moment. After all, it’s the actual reason why you’re writing it. Now, speak directly to it and say something along the lines of:

“Anxiety, buddy, I honestly dislike your company at times. However, I also understand why you’re here and that you’re trying to help in your own special way. I’m aware you may go away as soon as I finally make myself heard. Despite this, I’ll try not to get too angry or want to kick you out before understanding your visit if you ever come back. It’ll be difficult, so no promises.”

Write a letter to anxiety

Doing so means entering into an internal dialogue with it and opening new avenues of self-knowledge. Symptoms such as anxiety are often the tip of an iceberg. One deep inside the darkness of your unconscious. Therefore, part of any psychotherapeutic healing process you may undergo must be to uncover an underlying psychological conflict.

As we mentioned at the beginning, narrative psychotherapy is about using techniques such as this letter to anxiety. They’re great for facilitating the process of transforming subjective sensations into words. Thus, we highly encourage you to write your own letter to anxiety at this time. In other words, try to define your current relationship with it. How would you start your own letter?

A Buddhist Fable About Anxiety and Desire
This Buddhist fable about anxiety has a lot to tell us about the nature of desire, and the dangers of letting our emotions take over. Read more »
Link copied!
Interesting Articles
Personal Development
If I Believe in Myself, I'll Never Stop Growing

Personal Development
"Forgive Me": Magical Words that Can Transform Relationships

Sometimes, you blame yourself for feeling down or depressed. However, you don't realize that, in some situations, it's OK to feel bad. Have you ever wondered what lies behind certain…

Personal Development
How You React is What Matters Most

How to react to fate's fickleness? Even though it often provides you with extraordinary moments, it also changes dramatically at…