Aldous Huxley is one of those authors who, decades ago, dared to write about the future and even predicted how freedom will end. His hypotheses weren't far-fetched at all if you analyze the current worldwide situation. 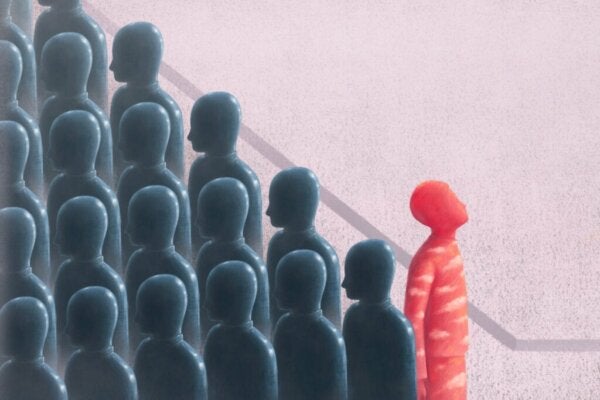 Do you ever wonder how freedom will end? Current times are tough and uncertain and we’re all in the midst of constant change at every level, be it economic, political, social, etc. In fact, people wonder how much worse things can get. It’s hard to tell but some of the reflections of people like Aldous Huxley, who experienced a similar situation in his time, are quite telling.

This writer and philosopher reflected on what the loss of freedom meant, both at the individual and collective levels. Huxley experienced the events that took place during WWI and WWII, between 1914 and 1945. He drew his own conclusions from such hard times.

For Huxley, the most important thing in times of crisis is divergent, individual, and critical thinking. It’s the only way to fight against the system and against all social injustice and tyranny in the world.

“But I don’t want comfort. I want God, I want poetry, I want real danger, I want freedom, I want goodness. I want sin.”

The novel, published in 1931, somehow predicts modern life. The book warns about the threats of the for-profit media and passivity. It considers how even an intelligent population can gladly choose dictatorship over freedom.

Brave New World is a description of a society in which everyone is “happy” all the time. This happens thanks to the previous destruction of the free will of the majority of the population, genetic engineering, and Pavlovian conditioning. One in which everyone is entertained by endless distractions and even drugs.

Indeed, the world state of Brave New World is a dictatorship that strives to ensure order. One run by ten oligarchs who rely on an extensive bureaucracy to keep the world running. They condition people to love their submission and to be proud of the vital work they do in order to feel relieved that they don’t have to worry about the world’s problems.

The five predictions about how freedom will end

Aldous Huxley, who also lived through the Cold War, made a statement to the BBC in 1958. He said the world must be alert and question government control over the population and the management of power.

1. Slaves of the media in the hands of private interests

In modern society, most people can’t go more than thirty minutes without wanting to check their cell phones. The truth is that we’re slaves of technology. As Huxley predicted, people have made it possible not to be bored with the endless information provided by the media, in spite of its negative mental health effects.

Distraction isn’t bad. It’s actually necessary, and Huxley wasn’t really opposed to it. However, it shouldn’t be a way to ignore the global problems. This is because there’s always someone who’ll take advantage of these distractions to gain power and benefit themselves.

2. Freedom will end through advertising and consumerism

Consumerism also distracts and redirects your attention. They’re mere efforts to talk you into satisfying needs you never knew you had. For Huxley, consumerism is a kind of silent dictatorship that conditions people to constantly buy new things.

During his time, in the middle of the 20th century, television was just beginning to play a decisive role. Furthermore, there’s now an invasion of consumption and advertising. You simply have to open any social network such as Instagram, Twitter, Facebook, and YouTube to realize their true intentions. They seek to influence consumers with products or services to keep them as distracted as possible.

3. Establishment of a dictatorship based on surveillance

Thus, in the interview conducted by El Confidencial, she stated that: “The Internet is dominated by an economic model based on data mining for the manipulation of people in order to sell them products, services, experiences, and political candidates and it’s in the hands of few companies that are fighting each other to dominate this market. Governments are, in fact, clients of these companies and use their infrastructures to control the population, produce fake news, or persecute dissidents”.

4. Freedom will end through the pharmacological revolution

Drugs used to be a way to keep people “happy” and under control. How about now? Well, many believe this is happening through vaccination.

Although there are thousands of examples, take The Red Pill podcast. In it, brain experts talk about new mind control techniques. They put forward many hypotheses, such as that the Bill and Melinda Gates Foundation was supposedly already developing vaccines with which they would introduce microchips into your body and control minds through 5G networks.

However, there’s no evidence that this is happening.

5. Politicians advised by professionals, according to Aldous Huxley

All politicians who occupy important positions have advisors who want the population to see in them the values they appreciate. Appearances are important, not real actions.

Thus, marketing in politics is the key to influencing people’s decisions when it comes to electing one candidate over another.

Aldous Huxley was a person who put his sights on the distant horizon. The future world in his mind was one in which people would be controlled through technology.

5 Ways to Access Visionary Experiences According to Aldous Huxley
Aldous Huxley spent a great deal of his life tapping into visionary experiences and how to attain them. We'll talk about these experiences in this article! Read more »
Link copied!
Interesting Articles
Literature and Psychology
Aesthetic Intelligence: The Ability to Sense Beauty