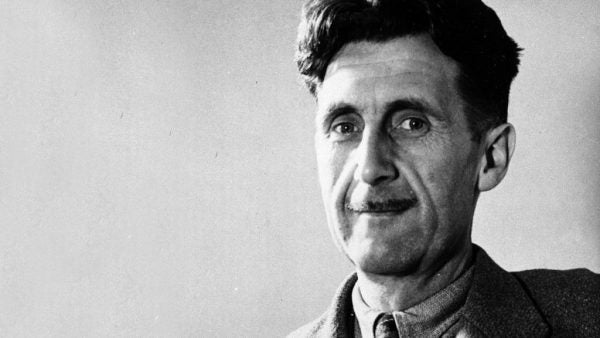 The novel 1984, along with Animal Farm, are George Orwell’s most famous works. This writer presents us with political literature containing highly interesting psychological nuances. Orwell is famous for his democratic socialist (not to be confused with social democracy) ideology and his anti-totalitarianism. In fact, Orwell traveled to Spain to fight fascism in the POUM militia during the civil war. He shares this story in his book Homage to Catalonia.

Throughout the novel, Orwell presents a series of interesting concepts from a psychological perspective. In this article we’re going to analyze some of these concepts in depth. Specifically, we’ll talk about: (a) double think, (b) new language, and (c) a society based on the control of information.

First, one of the main ways that the government maintains control over the population is the concept of doublethink. Double-thinking is the power of holding two contradictory opinions at the same time. They’re two opposing beliefs housed at the same time by the same person.

In Oceania the population is educated in doublethink so that they know how to accept contradictions and understand their practical existence. In the controlled society in 1984, the signs of a totalitarian government aren’t hidden. Totalitarianism is taught, and the people both accept totalitarianism and deny it at the same time. This is reflected in the three government slogans:

War is peace. Liberty is slavery. Ignorance is strength.

The ultimate goal of double think is to get the population thinking this way automatically. The government wants its people to get used to keeping two contradictory thoughts in their heads without even realizing that they’re contradictory. Does this happen in real life? Is there any syllogism between double think and our way of thinking? This is where the psychological interest in double think comes into play.

Doublethink in our society

Many studies have shown that our brain supports contradictory ideas. This idea revolves around Festinger’s theory of cognitive dissonance. His theory states that it’s possible for us to have dissonant ideas. However, Festinger states that there are mechanisms in our brains to ignore or resolve that dissonance. Double thinking would be a way to rationalize dissonances and be able to coexist with them.

In reality we use double think more than we can imagine. Governments take advantage of this and use double think to some extent. A clear example is our animosity towards terrorist attacks. However, at the same time many countries carry out acts of the same nature and even sell arms to these terrorist groups. We must take extreme care. The rationalization of contradictions is an automatic process, and we can carry out that process without even realizing it.

Another key aspect of the government’s control in 1984 is the control of thought. To achieve thought control the government seeks to alter language so that thought becomes practical instead of useful for reasoning. The danger is that is people think excessively, it would break the double thought and this would lead to the government’s destruction. If we follow the Sapir-Whorf hypothesis, Orwell proposes that by changing language we can change the human mind.

To achieve thought control, the Oceania government reduces language to its simplest form, and turns it into a totally pragmatic language. In this way, synonyms and antonyms lose their meaning. It’s no longer interesting to communicate the nuances of words that lead to judgments and interpretations. Antonyms generate conflict, and conflict gives way to reason. An example of this may be removing the world “war” from the dictionary and speaking only in terms of more peace or less peace.

The lesson we can take from this new language is that language can be dangerous in our lives. Language is capable of altering our perception and our thinking. Thus, a political discourse may seem very different depending on the words used to describe it. When a politician tries to place words like “democracy,” “constitutional,” and “peace” placed against words such as “attack,” or “war,” they’re attempting to seek sympathy from their citizens. For this reason it’s important to explore the reasoning behind why people use particular language.

Society based on the control of information in 1984

Lastly, in 1984, “Big Brother” is always watching and controlling everything. “Big Brother” watches citizens everywhere, including in their own homes. Even within families, children are educated to watch their parents and denounce them if they commit a crime. A key aspect of control is the manipulation of information.

We’re not immune to the manipulation and control of information. The mass media, including television, radio, and newspapers, usually have parties and governments behind them that alter information in order to influence our opinions. Therefore, all information we receive requires us to think critically about what we’re reading.

In conclusion, in 1984 Orwell poses a very interesting dystopian society with great parallels to our current society. It’s important to reflect on these parallels and see the potential faults in our own societies. If we want to avoid evolving towards an Orwellian world, it’s important to maintain a critical attitude towards the mechanisms that influence and persuade us.

Steppenwolf: a Book to Help You Reflect
Hermann Hesse is one of the most recognized writers of the 20th century. His most famous works include Siddhartha, Damian, and, of course, Steppenwolf. Read more »
Link copied!
Interesting Articles
Psychology Today
Description and Characteristics of Tourism Phobia

In order for the brain to function as best it can, it's necessary to feed it the nutrients it needs.…

Culture
The Theory of Multiple Intelligences

Albert Einstein was a scientist and an inspiring visionary. He found beauty in darkness, revolutionized physics, and helped us understand…

There was once a time, very distant for us, when we stopped looking upwards with wonder and admiration and started…