People affected by alcohol-induced blackouts often wake up in strange places without remembering how they got there. As a result, some people under the influence of this syndrome even perform criminal acts such as murder. 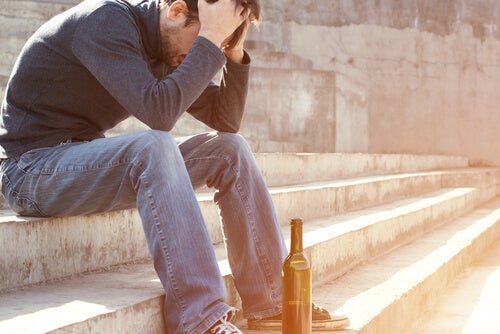 Alcohol-induced blackouts are caused by acute intoxication resulting from alcohol consumption. It’s a kind of amnesia that affects the memory of events that occurred while under the influence of alcohol.

Under this syndrome, affected individuals may behave in certain characteristic ways. These can include driving long distances without being fully aware of it or having seemingly normal conversations at parties that they may later fail to remember.

Affected subjects often wake up in strange places without remembering how they got there. Thus, some people under the influence of this syndrome are even capable of criminal acts such as murder (2).

A blackout can be complete (en bloc) or partial (fragmentary or attenuated). Thus, when a person has a complete blackout, they have total amnesia regarding certain significant events that they would otherwise have remembered. What most characterizes this type of blackout is that the memory loss is permanent and can’t be recovered under any circumstances.

However, fragmentary blackouts seem to occur more frequently (4, 5). In this type of alcohol-induced amnesia, there’s a greater likelihood of the person remembering at least part of what happened when they were intoxicated.

In these cases, the patient may believe that they have nothing to remember and that the forgotten events simply don’t exist. Thus, metamemory deficits are an issue in partial blackout research.

This syndrome is common, especially in people who indulge in frequent and high volume alcohol consumption.

In fact, this factor is the one most closely related to the causes of the blackout. Experts have shown that anyone who drinks too much and too fast can experience a blackout.

Although people would need a high blood alcohol concentration in order to suffer a blackout, many of these alcohol consumers remember drinking much more and not having this type of amnesia (6).

Thus, it appears that the main risk factors for blackout are:

However, it seems that not all people who drink quickly and excessively suffer these types of amnesia episodes. Certain people, for some reason, are more vulnerable to alcohol-induced memory impairment (6, 7).

A blackout is the result of alcohol-induced disruption of memory formation. Memory formation involves the following processes (8):

Alcohol has its greatest effects on the first memory process, encoding. The effect of alcohol on encoding can disrupt how the brain processes context in its episodic memory formation.

Episodic memory deals with the context of memories. If the episode is encoded with a defective context, as may occur in a blackout, then retrieval of memories relating to episodic memory may be particularly difficult (9, 10) or even impossible, in the case of total blackout.

The positive thing about partial blackout is that, by reminding a person of the events that occurred during their blackout, it often helps them to recover some forgotten memories. These details can be beneficial in reconstructing memory that wasn’t well encoded.

To date, it seems clear that blackouts don’t occur only in those who abuse alcohol. However, blackout is an indication of excessive alcohol consumption. In fact, a large majority of alcoholics experience blackouts during the early phase of addiction (11).

In addition, chronic blackouts can be a clear sign of alcoholism. One study has determined that college students who suffered from this syndrome were frightened by the amnesia they had. As a result, their alcohol consumption decreased.

Clinical Psychology
Pure O: What Is It and How Can You Combat It?