Agoraphobia: The Fear of Fear 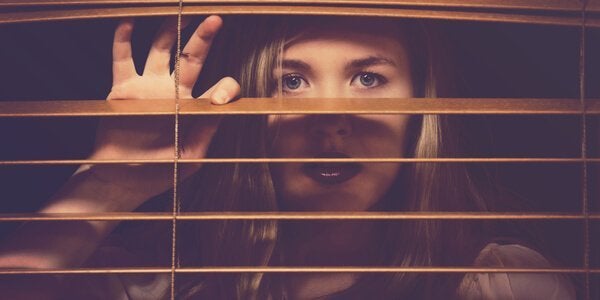 A lot has been written and spoken about agoraphobia. Many times this disorder is mistakenly defined as “the fear of open spaces or spaces that are very crowded.” This is not entirely correct.

1. An intense fear of two or more of the following situations:

2. The intense fear of being in those situations (in most cases) revolves around experiencing a panic attack and not being able to escape or receive help. That’s why the underlying problematic emotion in the case of agoraphobia is a fear of fear.

It’s not that waiting in line or being at the movies is the problem per se. Instead, a person with agoraphobia is extremely afraid of experiencing intense fear that will provoke a panic or anxiety attack.

In this article, we’ll briefly explain the emotional functioning of agoraphobia, what causes and maintains it. Additionally, we’ll provide a set of practical ideas so that this phobia won’t limit your everyday life.

“Fear is natural for prudent beings, and knowing how to overcome it is what it means to be brave.”
-Alonso de Ercilla y Zúñiga-

Agoraphobia: more than a fear of being in open spaces

When someone suffers from agoraphobia, they’re actually not afraid of being in an open space or in a crowded room. Actually, they’re afraid of experiencing an anxiety or panic attack in that place. Thus, they avoid leaving their home and limit the places they go.

In other words, agoraphobia is defined as a fear of fear. That’s why the individual creates a kind of “map” of the places where they feel safe or insecure. Then they only frequent places where they aren’t afraid they’ll have a panic attack. If they have to go further and cannot avoid the situation, they go with someone they trust.

Likewise, someone with agoraphobia may become completely incapable of leaving places they have defined as “safe” if they’re not in the company of someone they trust. For this reason, a fear of fear almost always goes hand-in-hand with symptoms of depression. It’s a result of negative self-image and the feeling of disability they experience when it comes to doing day-to-day tasks.

Where does this fear of fear come from?

In most cases, people with agoraphobia have previously experienced a panic attack or very intense episode of anxiety. Since this experience triggers their deepest and most primitive fear (an intense activation of the cerebral amygdala), they believe they’re going to die or are about to faint. Some people even feel that they’re going crazy or will lose control of their bowels.

Thus, they begin to be afraid of feeling this fear (the panic attack) and take precautions to reduce their exposure. These precautions are avoidance behaviors that only limit their practical and emotional independence. It lowers their self-image and makes them feel even more disabled. Also, these behaviors increase their fear, gradually making it worse.

Despite the continuous fear of fear they feel throughout the day in different situations, they feel protected and less vulnerable in their own home. This is still true even if they’ve had anxiety or panic attacks in their home.

Therefore, it’s noteworthy that people with agoraphobia unknowingly perform self-deceit and develop behavioral patterns associated with security. In many cases, these behaviors are superstitious and avoidant and make the person feel that everything is under control.

If “dangerous” situations are avoided and there’s no panic attack, why does the fear not go away?

Because with this map of safe places and avoidance of certain situations, they never feel like “nothing is wrong” or “nothing about this is dangerous.” The false security felt by someone with agoraphobia does nothing more than incubate their growing fear. Without realizing it, a reality is constructed that ends up suffocating their freedom and independence.

At this point, we’re referring to the behavioral patterns which maintain the problem. That is, agoraphobia is maintained by something different than what created it:

“He who fears he shall suffer, already suffers what he fears.”
-Chinese proverb-

How can I overcome my fear of fear?

To this day, the only way to overcome agoraphobia is to confront it. You need to have a perceptive-corrective experience that breaks the associations you hold between situations-places-fear. For this, therapy is a must.

There are different kinds of therapeutic approaches to overcome a fear of fear. However, the only approach that has scientifically proven its effectiveness is cognitive-behavioral therapy. That doesn’t mean that it’s the only type of therapy that works. It’s just the only one that has been proven by empirical tests based on objective facts. In any case, you need to see a psychologist so that he can guide you through the steps needed to face this fear.

On the other hand, a very good exercise for taking control of the problem is to study your case and define how far you can go.

Finally, remember that your fear is irrational and therefore requires corrective experiences in order to go away. Just thinking about it or reading self-help books is not likely to be enough. Your mind needs to relearn that those situations and places it fears so much are uncomfortable, but not dangerous. You can do it!

Anuptaphobia: Pathological Fear of Not Finding a Partner
People with anuptaphobia have serious self-esteem problems that may be the result of bad breakups, rejection, or abandonment by loved ones in childhood.Here are several tell-tale signs that a person is currently suffering from anuptaphobia: Read more »
Link copied!
Interesting Articles
Psychology
Long-lasting Love Begins when the Infatuation Phase Ends