A Star Is Born - The Fame Monster

A Star Is Born is a story of feelings, redemption, and love. It's a tough story that'll invite you to reflect on various issues related to the world of entertainment. It's an emotional film due to its unforgettable musical moments. 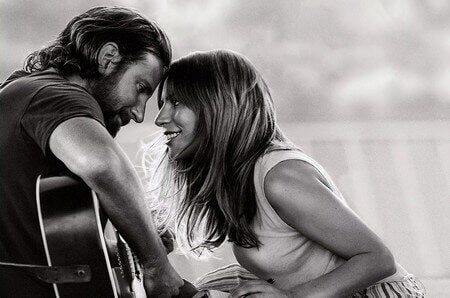 Bradley Cooper is one of the actors that resonated the most since the premiere of A Star Is Born in October 2018. This is because the audience just fell in love with him.

A Star Is Born received seven nominations at the 91st Academy Awards, including Best Picture, Best Actor, and Best Actress. The film was also a favorite at the Golden Globes. Nevertheless, it only won for Best Original Song.

This film is rooted in the world of music, from musicians taking their first steps in night clubs, to the sharp claws of the powerful music industry. Lady Gaga knows this environment first-hand and, thus, shines with her own light. Her acting is powerful in this film and might even give you goosebumps.

“Jack talked about how music is essentially 12 notes between any octave. Twelve notes, and the octave repeats. It’s the same story, told over and over, forever. All any artist can offer the world is how they see those 12 notes. That’s it. Hmm.”

A Star Is Born, silencing criticism

Problems arise when it comes to remakes, especially if the originals are widely known and respected. This is because remakes often receive negative reviews even before anybody watches them. In this case, the shadow of the past was quite big, as there’s more than one version. Three movies (1954, 1976, 2018) and one TV series (1954) are remakes of sort of the same story, A Star Is Born, from 1937.

All versions depart from the original somewhat. In fact; the three versions weren’t about musicians but about movie actors. However, a similar love story followed by a heartbreaking drama is present in all of them. The change of industry wasn’t an invention in the 2018 version either. In 1976, Frank Pierson brought it to the silver screen with Barbra Streisand and Kris Kristofferson.

A Star Is Born generated expectation because, in addition to being a remake, it meant Cooper’s jump to directing and Gaga as a movie actress. Two well-known names and their way of exploring new media, new artistic forms. Lady Gaga had already taken her first steps in the world of acting through a small role and, then, as the protagonist of the fifth season of the American Horror Story series. But a feature film is a bigger deal.

Against all odds, the film garnered critical acclaim. Both Cooper and Gaga did a good job, and the latter soothes the drama and darkness of the film with her voice.

The person behind the artist

People have a tendency to idealize artists so much that they forget there’s a sentient human being behind their performing persona. It’s because the industry and the mass media have contributed to such idealization. Thus, artists stop being people and become products, mere objects of consumption.

Coping with the stress of a tour, sleeping each night in a different place, and having to perform 100% before a massive audience that expects to see the best of you doesn’t seem like an easy task at all. For this reason, many artists often look for solace in alcohol and drugs and end up depressed. All of this is due, in part, to their constant exposure. Everything they do and everything they say is up for controversy, even their physical appearance. Fashion and appearance go hand in hand with music and film. Artists function as fashion models and that shouldn’t be their role. As you can imagine, this is painstakingly captured in the new version of A Star Is Born.

Jackson is a famous musician that’s seriously addicted to alcohol and drugs. Ally, on the other hand, is a young waitress with a great passion for music. However, she has to settle for acting in a night bar where she shares the stage with some drag queens. Their paths cross in this environment, and Jack falls for Ally’s voice, along with her open and naive personality.

Ally becomes famous thanks to him but, then, she has to become someone she’s not and forget about her lyrics, hair, and her basic essence. People usually judge artists who sell themselves and set aside their identity to gain a foothold in the music scene. What they don’t consider is that, sometimes, as hard as it may seem, many have no choice but to go through that hoop. Only then can they show who they really are, their natural talent, and their true personality. Jackson judges Ally because he never sold himself as she did. But he isn’t perfect because he did fall for another fame monster: addiction.

A Star Is Born and its take on fame

It’s hard to imagine what it takes to be a character linked to the mass spectacle. A Star Is Born brings you closer to that reality. It destroys the idyllic paradise they’ve tried to sell you. It’s a rather human story in a rather dehumanized world.

Jackson’s situation is quite tragic. This is because he supposedly has everything to be happy about. Yet he’s in a hell that’s very difficult to get out of. Ally supports him to the end. She forgives his trespasses, even though they may seem unforgivable. Her love and understanding are above everything else and she knows that he’s ill when he publicly embarrasses her. She knows he doesn’t deserve to be tried or convicted for such a crime.

However, Ally’s manager can’t think of anything other than his business and he warns Jackson to stay away from her. Not before telling him that he’s going to do ruin her life if he doesn’t. Keep in mind that these words, told to a person who isn’t addicted or has self-esteem issues wouldn’t trigger a dramatic outcome.

Unfortunately, as Ally pointed out, Jack is ill. Therefore, those words are the last blow to his self-esteem and he decides to end his life. In the final scene, you can see that Ally is a famous artist who longer needs to prove herself. She pays a loving tribute to her late husband and the audience gets to witness the two faces of a ruthless industry: the objectification and subsequent rise of Ally, and Jackson’s demise.

A Star Is Born presents a story that fits Lady Gaga perfectly. This is because she, like Ally, started singing in bars before she became the eccentric artist the world knows today. However, if you pay closer attention to her music career, you become aware of her evolution. Her voice wasn’t the most important thing in her first songs but she’s now a respected artist. Nobody doubts her singing abilities anymore.

Artists grow, reinvent themselves, and evolve. Lady Gaga hasn’t abandoned her flamboyant character but has shown that she goes beyond it. She’s neither a pretty face nor the strange girl that the industry tried to sell you but a talented singer who has pleasantly surprised her audience as an actress.

A Star Is Born is a story of feelings, love, and understanding. It’s the same old story but for the current era. One that’s appealing to the same humanity that the industry who made the movie often takes away in real life.

Keanu Reeves, A Different Kind of Celebrity
Keanu Reeves is a different kind of celebrity. His resilience is admirable. Read all about him in this interesting article! Read more »
Link copied!
Interesting Articles
Cinema, Television, and Psychology
Call Me by Your Name: An Experience that Leaves a Mark