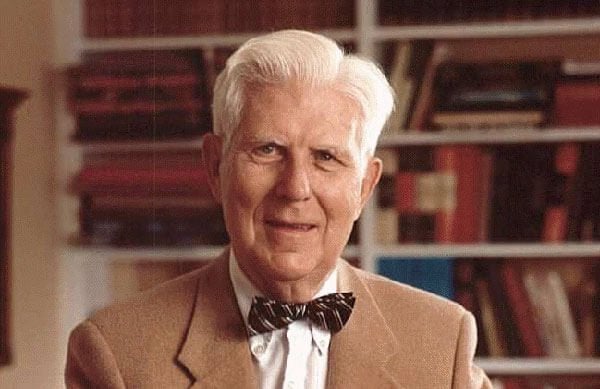 The quotes from Aaron Beck in this article gather his thoughts on cognitive distortions and congruent thought. It also considers their influence on the different disturbances of the spirit and the personality. In the 60s, this psychiatrist and American professor made one of the most relevant contributions to current psychotherapy. He helped to give shape to Cognitive Therapy or Cognitive Behavioral Therapy (CBT).

Aaron Beck’s quotes speak of how a targeted and accurate restructuring of our cognitive models allows us to enjoy better mental health and a better emotional balance. This change means we can obtain qualities that we need in order to advance and survive, overcome our problems and learn with and from our partner.

The interpretation is what hurts, not the fact itself

“Cognitive therapy seeks to alleviate psychological tensions by correcting misconceptions. By correcting erroneous beliefs, we can end the overreactions “

Beck’s thinking is based on the idea that people suffer because of the particular interpretation they have of the things that happen to them. Not because of the facts themselves. Most of our suffering would depend on the meaning and the importance we give to what happens to us. Not what actually happens to us.

Beck believes that psychotherapists have to help the person to identify their distorted beliefs to modify them. Their objective is to understand the cognitive models that the subject uses to modify them and remove their rigidness. This cognitive restructuring allows a change in interpreting and assessing what happens on a subjective level.

Aaron Beck and his theory applied to couples

The way we interpret reality influences every area of our lives. These thoughts also disturb and affect couples, both on an individual level and in the relationship itself.

“The spouses must cooperate, compromise and go on, using decisions of solidarity”

His book Love Is Never Enough: How Couples Can Overcome Misunderstandings, Resolve Conflicts, and Solve Relationship Problems Through Cognitive Therapy is a reference. It gives guidelines on how to instruct couples from a cognitive perspective, so they can identify and transform these models.

“There are special qualities, such as commitment, sensitivity, generosity, consideration, loyalty, responsibility, reliability, all of which are vital for a happy relationship”

The objective of this is for them to try and identify harmful patterns and look for alternatives to replace them. Only by being aware of this, will the couple be able to prosper and develop. Here is one of Aaron Beck’s quotes that best explains this:

“Although love is a powerful incentive for husbands and wives to help and support each other, make each other happy and create a family, it is not in itself the essence of the relationship, because it does not provide the personal qualities and aptitudes that are vital to sustain it and make it grow”.

A model for depression

As a child Aaron Beck suffered fears that he then had to face. This cognitive way of approaching his problems inspired him to develop his therapeutic theory years later. His specific focus was on depression.

“If our thinking is bogged down by distorted symbolic meanings, illogical reasoning and erroneous interpretations, we become, in truth, blind and deaf”.

For him, the symptoms of depression began with the activation of negative cognitive schemes and subsequent distortions. He studied depression in such depth and was so eloquent in describing it that one of the instruments most commonly used to measure its severity bears his name: the Beck Depression Inventory (BDI). It was a very important contribution for the worlds of psychiatry and psychology. It became one of the most powerful alternatives to the psychoanalytic conceptualization of depression.

Its application has spread to other disorders

Beck also investigated the effectiveness of his Cognitive Therapy in many other problems, such as anxiety, substance abuse and different personality disorders. Here is another quote that helps us understand his approach:

“As far as substance abuse goes, the cognitive approach helps people cope with the problems that lead to emotional distress and to gain a broader perspective on their dependence on drugs for the pleasure and / or relief of discomfort”.

As for schizophrenia, he suggested that the dysfunctions of these patients were simply vulnerabilities. He shows us that the professional’s job is to develop more realistic alternatives to their beliefs, delusions and hallucinations.

A starting point for your personal transformation

Beck’s model can be taken as basis to promote great personal change. It is true that we cannot choose the contexts or the events that are going to happen to us. But we can intervene consciously about the interpretation that we make of things that happen to us. We can also apply this to the things that sometimes harm us.

We can choose what to internalize about certain facts. We can choose to focus on the positive or the negative.

All of this depends on how our mind processes things. We can also choose how to act. That is, what our response will be. All of these phrases by Aaron Beck have very hopeful undertones. We often feel unable to find an alternative, hopeful point of view to understand what happens to us. We don’t realize that by being aware of how we interpret things we can modulate the intensity of our suffering.

Aaron Beck and His New Unified Model of Depression
Psychologist Aaron Beck, known for revolutionizing our conception of depression and its treatment, recently published an article where he updates his theory Read more »
Link copied!
Interesting Articles
Psychology
Learning to Communicate Effectively

How many times have you tried to communicate something, only to have others interpret it very differently than expected? How many…

Psychology
The Origin of Psychology: History, Authors, and Models

Today, psychology is considered a consolidated science, though it continues to evolve and be influenced by a wide variety of…

Perfect children don't always know how to smile, nor do they know the sound of happiness. They're afraid to make…