7 Signs to Detect a Toxic Marriage 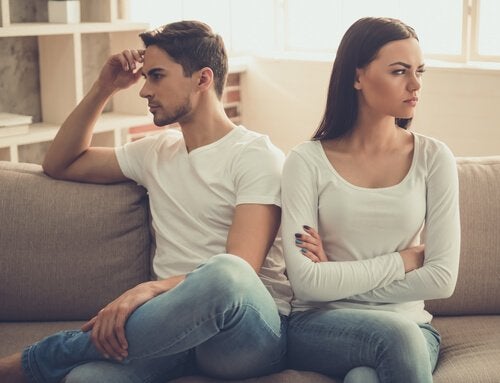 A marriage becomes toxic when at least one of the members lacks happiness. Discomfort becomes routine and an emotionally healthy connection is impossible. The line between a toxic marriage and one that is problematic is very thin. Because of this, we need to be aware of the signals that indicate toxicity.

The existence of emotional dependence, possessive behaviors, jealousy, manipulation, or frequent arguments are indicators that the relationship isn’t going well. Furthermore, these behaviors normally indicate a situation of inequality between the partners. One gains ground and exercises their control, while the other is left in the shadows and can be manipulated.

A healthy relationship provides pleasure, happiness, and well-being. However, in a toxic marriage, one or both parties feel unhappy, sad, or anxious the majority of the time they are with the other person. This suffering takes a great emotional toll on the couple, as well as on the family. Let’s see its signs and characteristics.

Emotional dependence is a psychological trap that chains the possibility of being happy to being with another person. Dependent people are able to recognize the abuse and contempt that they suffer daily, but they aren’t capable of leaving the entrapment of their partners. They ask for forgiveness even for things they haven’t done, they show obedience and take care of every detail so that the other feels comfortable, even if they harm themselves in the process. Their intention is to obtain the approval and affection of others.

The basis of emotional dependence is possibly found in low self-esteem that makes the dependent person not feel up to the standards of their partner. These people are critical of themselves to the extreme and because of this feel guilty, even from the contempt that they suffer because of their partners. What they don’t know is that this contempt from the other person in almost every way grows from acting in submission.

The dependent person returns again and again to the toxic relationship in the same way that a drug addict goes back to using. Every time they return, the situation worsens, growing the contempt in the couple and diminishing the dignity and self-esteem of the dependent person.

Signs to detect a toxic marriage

Love and dependence are opposites, if they exist together they destroy each other. When this happens, although the relationship may be long-term, love hides and becomes a need for well-being, for happiness. This will lead to overstepping the limits of respect and the obsession for control, and these together, along with the need for approval, will dominate the relationship.

Arguments in romantic relationships always come up. There’s nothing wrong with having different opinions and expressing them to a partner. The problem comes when this becomes routine and limits cease to exist.

Here are 7 signs to identify a toxic marriage:

All of these signs create an atmosphere of discomfort that hinders the preservation of a healthy relationship They don’t do anyone good and harm the couple, so much so that the partner may become pathological. That’s why it’s so important to learn to be independent on an emotional level. This way you’ll know how to be happy without depending on anyone, and you’ll know how to create your own well-being in a relationship.

While dependency ties and manipulates, emotional independence gives wings to fly. Let’s take care of ourselves and love ourselves in order to have great relationships.

Why Do Some Unhappy Couples Stay Together?
In today's article we're going to look at the main reasons unhappy couples avoid breaking up, even when they're just not good together.  Read more »
Link copied!
Interesting Articles
Culture
The Timeless Story of Christmas

Culture
Women's Day: If We Stop, the World Stops

Rubén Darío once said that without women life would just be rhetoric. But we're more than just poetry, because the world…

Interesting Articles
Personal Development
What Masks Do You Wear?