5 Wonderful Buddhist Tales that Will Make You Wiser 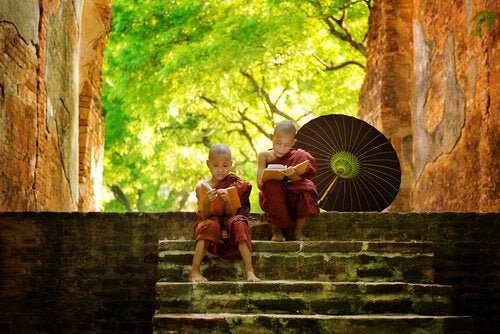 Buddhism comes from the word “budhi,” which means awaken. Therefore, Buddhist philosophy is considered the philosophy of “the process of waking up.” A process through which you must not only open your eyes, but also the rest of your senses and your intellect. You can do this through many different ways, one of which is through Buddhist tales.

These five Buddhist tales, will encourage you to leave behind apathy, develop a greater understanding, and become a wiser person. We hope you enjoy them and take advantage of all of the wisdom they contain.

Buddhism teaches that, besides cultivating love and kindness, we should try to develop our intellectual ability in order to reach a more clear understanding.

The cup of tea

The professor arrived at the Zen master’s house and introduced himself by boasting about all of the titles and degrees he had acquired throughout his long years of studying. Then, the professor told him the reason for his visit, which was to learn all of the secrets of Zen wisdom.

Instead of giving him explanations, the master invited him to sit down and served him a cup of tea. When the cup filled up, the wise old man, who was apparently distracted, kept pouring the infusion so that the liquid spilled over onto the table.

The professor couldn’t help but call out: “The cup is full, no more tea fits inside”, he warned. The master put the teapot down and affirmed: “You are like a cup, you arrived full to the brim of opinions and prejudice. Unless your cup is empty, you won’t be able to learn anything”.”

The first of these five Buddhist tales teaches us that with a mind full of prejudice, it is impossible to learn and take into consideration new beliefs. It’s necessary to “empty oneself” of old precepts and be open to new teachings.

Buddha was transmitting his teachings to a group of disciples when a man came up and insulted him, with the intent of attacking him. Under the gaze of everyone present, Buddha reacted with utmost tranquility, remaining totally still and silent.

When the man left, one of his disciples, enraged by such behavior, asked Buddha why he had let that stranger abuse him in such a way.

Buddha answered serenely: “If I give you a horse as a gift, but you don’t accept it, whose horse is it?” The student, after a moment’s hesitation, answered: “If I don’t accept it, it would continue being yours.”

Buddha nodded and explained that, although some people may decide to waste their time giving us insults, we can choose whether we want to accept them or not, just as we would with any other gift. “If you take it, you’re accepting it. And if not, he who insults you is simply left with an insult in their hands.”

We can’t blame the person that hurts us, because it is our decision to accept their words instead of leaving them on the very lips they came out of.

Two Buddhist monks, one old and one young, were strolling outside of the monastery, near a river that had flooded its surroundings. A beautiful woman came up to the monks and asked them for help crossing the river.

The young monk was horrified at the idea of taking her into his arms, but the old monk picked her up very naturally and carried her across. Then, the two monks continued on their stroll.

The young man couldn’t stop thinking about the incident and finally exclaimed: “Master! You know that we have taken a vow of abstinence. We aren’t allowed to touch a woman like that. How could you take the beautiful woman into your arms, let her put her arms around your neck, her breasts against your chest, and carry her across the river like that?” The old man answered: “Child of mine, you’re still carrying her!”

The third of these Buddhist tales helps us understand that sometimes we carry the past, with emotions of guilt or resentment, and we make it even more heavy than it really was. By accepting that the incident doesn’t form a part of our present, we can take a great deal of emotional weight off of ourselves.

One afternoon, some people saw an old woman looking for something outside of her hut. “What’s going on? What are you looking for?” the people would ask her. “I lost a needle,” she said. All of the people present started to look for the needle with the old woman.

After some time, someone commented: “The street is very long and a needle is very small, why don’t you tell us exactly where you dropped it?” “Inside of my house,” said the old woman.

“Have you gone mad? If you dropped the needle inside of your house, why are you looking for it out here?” the people asked her. “Because there’s sunlight out here, but there’s none inside my house,” she said matter of factly.

The fourth Buddhist tale reminds us that many times, out of convenience, we seek for things on the outside that are actually found on the inside. Why do we seek happiness outside of ourselves? Did we lose it there?

We are not the same

Nobody has developed benevolence and compassion like Buddha did in his time. Among his cousins, there was the evil Devadatta, who was always jealous and determined to make him look bad. He was even willing to kill him.

One day as Buddha was calmly strolling along, his cousin Devadatta threw a heavy rock at him from atop a hill. The rock fell beside Buddha and Devadatta failed to end his life. Buddha, even after realizing what had happened, remained impassive, never letting the smile slip from his face.

Days later, Buddha ran into his cousin and greeted him warmly. Very surprised, Devadatta asked him: “Are you not angry?” “No, of course not”, assured Buddha.

Still shocked, Devadatta asked him: “Why not?” And Buddha affirmed: “Because you’re no longer the one who threw the rock, and I’m no longer the same one who was there when the rock was thrown.”

Link copied!
Interesting Articles
Culture
Why Crises Can Bring Out the Best in Us

The word crisis derives from the Greek verb "krino", meaning "I judge and choose". This concept suggests a choice or…

Culture
You Don't Have to Lose Something to Value It