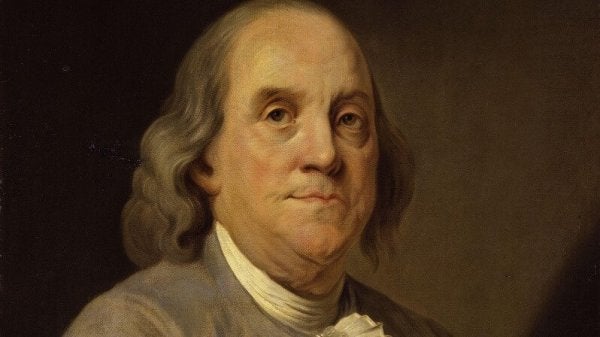 Some of Benjamin Franklin’s quotes are like little capsules of wisdom that we can still reflect on today. He was, of course, one of the founding fathers of the U.S. The most amazing thing about him is that he only received a 10-year-old’s education.

He had an insatiable curiosity, which fueled his autodidactic passion and helped him invent the iron stove in 1744 and the lightning rod in 1752. Benjamin Franklin’s incredible inventions made him famous.

However, we can’t forget Benjamin Franklin’s other facets, such as his work as a politician, author, writer, diplomat, statesman, and activist. He was also considered an anxious person with the amazing ability to succeed in various professional pursuits. Today, we’ll be sharing 5 of his best-known quotes.

1. “It is easier to prevent bad habits than to break them.”

This first quote talks about something very important: bad habits. Every day, people all around the world try to stop smoking, drinking, and doing drugs. But, every day, many of those people fall back into their addictions.

As Franklin states, it’s much simpler to prevent the bad habit from ever forming. By not even trying something, out of social pressure or curiosity, we can be sure that we won’t become dependent on it. Breaking a bad habit, on the other hand, requires much greater effort. It can be complicated and demand a lot of energy and resources.

When our body goes through withdrawals, it can be unendurable, and our willpower might be so weak that even a sentence from our doctor (“If you keep smoking/drinking/doing drugs, you’re going to die”) might be enough to make us crave another hit. With prevention, you never face this extreme of a situation. That’s the key.

2. “Speak ill of no man, but speak all the good you know of everybody.”

If we analyzed how we talk about others, we’d certainly be surprised by how often we’re overly critical, judgmental, and jealous. Maybe it’s a learned behavior. Maybe our own insecurities and fears made us behave this way. This second Benjamin Franklin quote encourages us to do the opposite.

Changing how we automatically talk isn’t easy, but if we’re conscious of it when we speak poorly about someone, we’ve already gained ground. That’s the only way for us to change our habits, bit by bit, and start speaking more kindly about others. Wouldn’t you like others to avoid speaking poorly of you too? Well, you can take the first step.

Since he was such a good inventor, Franklin felt a lot of pressure after any failed attempts. Mistakes can make us feel like we’re not good enough for whatever we’re doing, like all of our attempts are in vain, and we might as well just throw in the towel.

However, Franklin persevered with his ideas even after numerous failed attempts. Failures don’t matter. Look for ways to improve no matter what. Mistakes are learning opportunities. If we’ve set our minds on getting something done, persevering and learning from our shortcomings will help us make smarter decisions in the next attempt.

We can’t be afraid to stumble and to get it wrong. This means we’re learning, and that next time we’ll do better. Remember that the best inventors got it wrong many times before they got it right – only after many hours, a lot of willpower, perseverance, and desire.

4. “Having been poor is no shame, but being ashamed of it is.”

The fourth Benjamin Franklin quote we’ll talk about deals with shame. Shame can paralyze and terrorize us. Why, from such a young age, are we ashamed of everything? Shame is an emotion that we’re trained to associate with certain occasions.

On the other hand, we all have a past. Poor or rich. We are what we’ve experienced. In many cases, you have to accept where you’ve been and what you’ve achieved in order to understand the power you have over what happens to you. In this sense, we need to be proud of our lives, not ashamed.

Additionally, Benjamin Franklin’s quote must be understood in the context of the “new rich” being snubbed by those who were born with a silver spoon in their mouths. In his time, it was the understanding that everyone was born into a social class, and that’s where they should stay. Nowadays, though the social panorama is so different, it’s still true that certain people turn up their noses at those who didn’t study at a prestigious school.

It’s normal to have doubts. Doubts about doing something or not doing something, about the decisions we have to make… Sometimes doubts come from an insecurity that we have to resolve. However, other times it’s a red flag when we’re going to make a decision that’s not safe.

No important decision will be totally doubt-free. Doubt lets us know that we’ve arrived at a point where reflection will be important. Sometimes you really need to stop and devote time and resources to making a decision. However, this necessary paralysis doesn’t need to last forever. We won’t always be able to clear up all of the questions we have, and sometimes our circumstances won’t wait for us.

What did you think of these Benjamin Franklin quotes? Did they make you reflect on a certain aspect of your life? As you can see, he didn’t talk about things that aren’t relatable to us. On the contrary, even today we continue acting in a way that, years ago, Benjamin Franklin would have invited us to reflect on and potentially change.

The Ben Franklin Effect and Cognitive Dissonance
It may have a strange name, but the Ben Franklin Effect is rooted in a deep psychological concept that has to do with cognitive dissonance. Read more »
Link copied!
Interesting Articles
Cinema, Television, and Psychology
Sex Education - On Breaking Taboos

Byung-Chul Han's philosophical work is very interesting. His concepts are definitely worth analyzing, especially because they allow us to reflect on…

This beautiful oriental folktale is divided into two parts. Each one of them has its own lesson. The main character…