5 Things You Should Never Say In an Argument 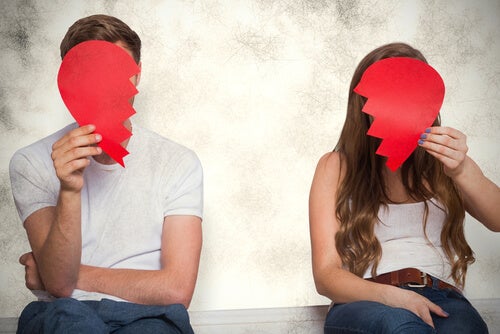 Having arguments in a relationship is perfectly normal. Who doesn’t have them? If they don’t happen, it’s probably because the relationship is distant and cold. Where there is love, there can also be a little anger, and this is nothing to worry about.

That being said, it should also be noted that it’s one thing to get angry and argue for a while, and another thing to throw highly aggressive insults at your partner, which could seriously hurt them.

If expressions of anger are centered around discomfort or concern, they can create tension, but not deep wounds. However, if the tone of conflict rises and the messages you send do not express an annoyance, but rather degrade or discredit your partner, the matter becomes more complicated.

“Violence is the last refuge of the incompetent.”
-Isaac Asimov-

Below, we tell you which words you should avoid at any cost if you want to maintain a healthy relationship:

Commands of silence are highly aggressive. Preventing the other person from saying what they think or feel is voiding their opinion entirely. There’s no good reason to prohibit your partner from speaking their mind, even if what they’re saying is complete nonsense.

If you don’t feel like you’re capable of listening to them, simply request to pause the conversation and go back to it later when you’re both more calm.

It’s very likely that your demand for silence won’t be successful, and in turn, it will put an end to communication between you two.

They say that “the tongue is the only muscle that can break bones.” Our self-esteem gets wounded when we are referred to as a bitch or a moron.

Insults have no purpose other than to humiliate others. They seek to diminish and debase other people, and sometimes even strip them of their personhood. This is why people use the names of animals to offend others.

One of the fastest ways to lose respect in a relationship is to end the relationship every time a problem arises, only to say sorry and make up later.

The words “This is over!” can pop up often when couples argue. If you’re not prepared to really end the relationship, it’s better to not say anything at all. If you do, it’s because you don’t really want to solve the problem, you just want to manipulate your partner with the threat of abandonment.

Threats like these result in nothing but feelings of resentment in them and a lack of credibility in you. From that point, communication between you two will be tainted by the idea that words don’t have meaning, that they are just said to be said, and that nothing should be taken seriously.

Insults to their family

Talking bad about their family is another low blow that results in strong resentment. Phrases like “you keep acting like your mother!” or “I hope you don’t end up a failure like your brother!” are unacceptable.

Phrases like these indicate that you only want to offend them, not defend your own opinion or behavior. They are intended to hurt, and this only escalates the problem.

I can’t stand you!

Stating that you can’t stand your partner is affirming that their way of feeling, thinking, and acting has no place in your emotional world. It’s a form of rejection with a high affective component.

Expressions like these block communication in the relationship. They imply a lack of acceptance and a refusal to understand.

It’s normal for couples to have problems that escalate sometimes. But to maintain good mental health and a rewarding relationship, you should avoid letting your anger send messages that will surely have serious consequences in the future.

Link copied!
Interesting Articles
Psychology
People Who Believe They Are Undeserving of Love

Are there really people who consider themselves undeserving of love? In this article, we will talk about precisely this topic.…

Psychology
13 Ways to Be a Happy Couple

You'll probably agree that one of the most incredible and wonderful feelings in the world is love between two people, or more specifically, the love of a romantic couple. The feeling that…